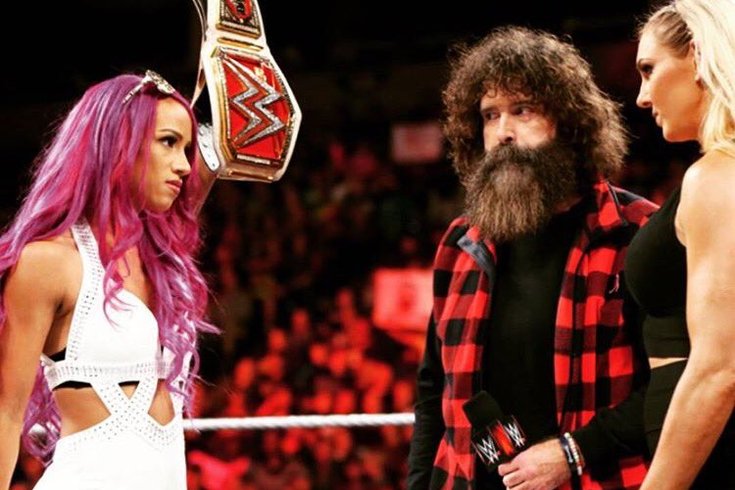 The last Raw before Sunday’s Hell in a Cell pay-per-view took place in the Target Center in Minneapolis Monday night. The card featured a non-title Triple Threat main event, a contract signing for what might be the most important women’s title match in recent history, and the return of “The Beast” Brock Lesnar.

While Lesnar’s return didn’t move the needle as much as Goldberg’s did last Monday night, it set the stage for a showdown between the two monsters in a few weeks when they both are scheduled to appear on Raw.

Here are some of the main stories coming out of the go-home show to Hell in a Cell:

And, man, was it a memorable promo. But the viewing audience seemed to be split on it.

There absolutely should be a movement to have the women in WWE tell their own stories and build to their own match. Last Monday, both Banks and Charlotte had their own sit-down interviews with Michael Cole to discuss their upcoming match. But this Monday night, the presence of Raw general manager Mick Foley rubbed some people the wrong way.

I’m of the opinion having one of the most iconic wrestlers, known for a few of his own Hell in a Cell bouts, could only help the build to a match of that caliber. However, during his promo, Foley came across as a guy who knew more than anybody – which, in storyline, he did – the dangers of competing in a Hell in a Cell match. In a way, people thought he was talking down to Banks and Charlotte and, in condescending fashion, embarrassed them for “not knowing” what they’re getting themselves into.

I know it’s a television show, and sometimes people take things a bit too seriously regarding pro wrestling. But I can absolutely see this criticism as being valid, despite me being a big proponent of it. I always believed Foley should’ve been involved in the buildup in some fashion, but as an old man talking down to the female athletes and telling them they haven’t a clue what to expect because they’ve never been in a match like that is maybe too much. Everybody knows these women are making history. Everybody knows the importance of this match and they’ve even mentioned how it will be one of the most grueling matches of their careers.

Having Foley come in and yell at them and tell them they don’t know what they’re doing was just out of place a little bit. His passion in his promo and the message was certainly right, but the delivery was a little suspect. Why not build the women up for their bravery and fortitude rather than tear them down because they don’t know what a Hell in a Cell match holds? Why won’t he do the same thing to Rusev or Kevin Owens as they both are set to compete in their first Hell in a Cell matches?

I still think that promo did a good job in building to what should be the true main event of the show, as that match should go on last.

For the first time since SummerSlam, Brock Lesnar appeared on WWE television to address Goldberg’s promo from last Monday. Well, his manager, Paul Heyman did. Lesnar was just there to… um… be there, I guess.

Heyman tried pitting the crowd against Lesnar, but they saw right through that. Lesnar’s very well known in Minnesota and very well-liked, so the chants of “Suplex City!” and “Goldberg sucks!” gave Heyman a tough job of trying to get Lesnar to look like the heel in this feud. The segment just ended abruptly during the chants.

In a random moment that didn’t really have a payoff, Chris Jericho let us know he lost The List and wouldn’t do anything until he found it. Seth Rollins would eventually come out with The List.

Eventually, Jericho would find it in the hands of Braun Strowman backstage. He was able to finally get it back. Phew!

Rollins and Owens get ready for Hell

Later in the night, Jericho would take part in a Non-Title Triple Threat match with Seth Rollins and Kevin Owens. Surprisingly, Rollins came out the victor by pinning both the champion and his best friend forever, slipping out of a double-suplex attempt and hitting a double powerbomb, pinning both of them for the three. After the match, Owens and Jericho attacked Rollins, and eventually we got a semi-lame pull-apart brawl between the champion and his challenger that ended when Owens hit a powerbomb on the ring apron to Rollins. Owens stood tall to end the show.

Reigns and Rusev have dueling vignettes

Much like last Monday’s sit-down interviews featuring Banks and Charlotte, Roman Reigns and Rusev were featured in their own set of vignettes on Monday night. Leading to their own Hell in a Cell match, Rusev was the last one to gain the upper hand on the other.

Reignsis coming in his own as a midcard champion.

It wasn’t a huge surprise given how WWE likes to book, but Sheamus and Cesaro defeating The New Day in a non-title match Monday night was about as predictable as a Ryan Mathews fumble during an Eagles game.

Cesaro hit Kofi Kingston with a masterful uppercut as he tried to jump on him from inside the ring to the outside and Sheamus hit Big E with the Brogue Kick to give the volatile tag team a huge win over the tag team champions. Will they be able to repeat that Sunday night at Hell in a Cell?

Enzo and Cass with the mic-less promo

During their intro, Enzo’s and Cass’s mics were cut off by Luke Gallows and Karl Anderson, who targeted the most popular tag team in WWE last Monday. Anderson and Gallows sent the message that the entire tag team division was on notice.

No mics? No problem. Amore and Cass went ahead with their introductions anyway. And it was awesome. Other than that, nothing’s cooking on the tag team front with the exception of the tag team title picture. The push for Enzo and Cass has been halted until WrestleMania time, and Gallows and Anderson are a bonafide joke on the main roster. WWE needs to fix it now, but they haven’t done many favors for either of these teams to this point.

Give Bayley something better

While seeing Banks and Charlotte face off inside Hell in a Cell will be groundbreaking and exciting, it seems as if the Raw brand’s forgotten about the rest of their women’s division. What WWE should be doing right now is building Bayley up as big as they can so she can take on whoever wins the Hell in a Cell match. This already forgotten aboutfeud with Dana Brooke isn’t cutting it.

Give Bayley a bunch of wins in a row and make her look dominant in doing so. That’s the only way she’ll be seen as a legitimate threat to either Banks or Charlotte for the Women’s Championship.

• Enzo Amore d. Karl Anderson by pinfall after Big Cass hit Anderson with a big boot from the outside of the ring with the referee not looking.

• Arm Wrestling Match: Bayley vs. Dana Brooke ended in a No Contest after Brooke attacked Bayley during the match. Bayley wound up hitting the Bayley-to-Belly on Brooke.

• Bo Dallas d. Curtis Axel by pinfall via a rollup.

• Golden Truth d. Shining Stars by pinfall after Henry knocked Titus O’Neil into the ropes, knocking Primo off the top into a double-team move and a pin from R-Truth.

• Cruiserweight Division: Rich Swann d. Brian Kendrick by pinfall via a rollup. TJ Perkins was on commentary during the match.

• Braun Strowman vs. Sami Zayn ended in a No Contest.