WWE Raw: Team Raw takes anger out on each other 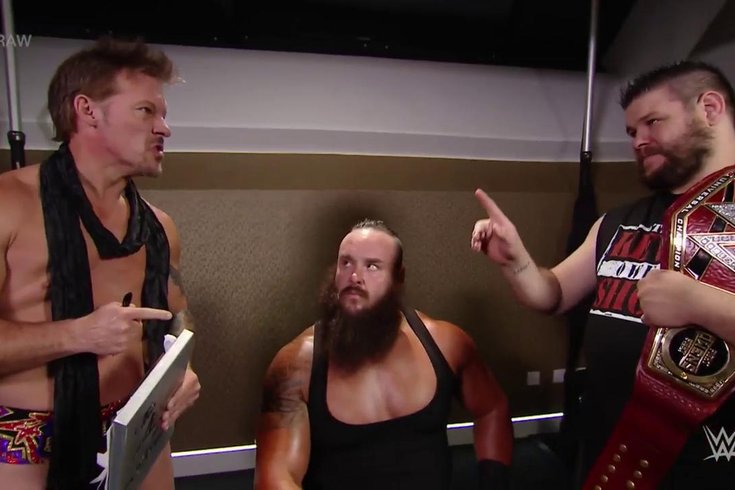 WWE flew across the pond for a European tour this week. Both Raw and SmackDown take place from the SSE Hydro in Glasgow, Scotland before the rosters return to the United States before the upcoming Survivor Series pay-per-view on November 20.

We now know who the members of each of Raw’s Survivor Series teams are and saw great video packages from Goldberg and Brock Lesnar, including a sit-down with Lesnar and Paul Heyman, who never disappoint.

Next Monday night, Goldberg and Lesnar will be face-to-face on Raw on the go-home show to Survivor Series. That’ll be as must-watch as it can get.

But first, let’s take a look at Raw’s main stories from Monday night:

The show began with Raw commissioner, Stephanie McMahon, introducing each of the members of the men’s side of Team Raw. We knew four of the five members: Kevin Owens, Chris Jericho, Roman Reigns and BraunStrowman. What name doesn’t belong in this group?

Although Strowman clearly isn’t on the same level, in storyline it makes sense that he was given this opportunity by Raw general manager, Mick Foley, who wasn’t in Glasgow Monday night, because he’s been begging for better competition for weeks.

What didn’t make much sense, in terms of storyline and the overall character of McMahon, was putting Seth Rollins on Team Raw with all of his enemies. Sure, the fans cheer him, but he’s still enemies with Reigns [for now], and his rivalry with Owens and Jericho is still very much alive.

Strowman also doesn’t like the guy. So, McMahon was hopeful her “Fab Five” would get their frustrations with each other out of their systems by pitting them all against each other in a Fatal Five Way main event.

Owens gets a big win … over his best friend

It was a very entertaining main event Monday night. There was a good spot with Rollins powerbombing Jericho through a table that Strowman was laying on, effectively taking Strowman out of the match.

The ending came out of nowhere – and no, Randy Orton was nowhere to be found – as Reigns hit Owens with a Superman Punch, but Owens landed on a prone Jericho, who was laid out by a Rollins’ Pedigree. Reigns rolled to the outside of the ring after he hit Owens, so nobody else was in the ring.

I thought it was a pretty good ending and having the champion win makes sense, even though you’ll always hear wins and losses don’t matter in WWE.

I have to admit, this was my favorite part of the show.

The inherent problem with putting wrestlers that hate each other on the same team is the obvious possibility they’ll turn on each other during the match. But apparently, that doesn’t matter to the Raw commissioner, because McMahon named – through Michael Cole – the five members of Team Raw’s women’s team on Monday night. Charlotte Flair, the Raw Women’s Champion, will be joined by Nia Jax, Alicia Fox, Bayley and Sasha Banks.

Charlotte tried naming Dana Brooke as a member of the team, but Cole took the spotlight and introduced Banks as the final member of the team. These six women would grapple in a six-woman tag team match, where Bayley got the pin on Charlotte with the Bayley-to-Belly. Stay tuned for that feud coming out of Survivor Series.

There’s nothing better in WWE than when they give us great video packages. They did that Monday night with Goldberg and Lesnar.

Goldberg’s message for Lesnar? He finds it “fair as a competitor” to give Lesnar a shot to even the score. Goldberg and Lesnar have only faced off one time before, with ended in a Goldberg win at WrestleMania XX

Lesnar’s promo made more sense than anything we’ve heard so far regarding this feud. He said he didn’t know why Goldberg would target him to come back and fight. Lesnar warned Goldberg’s wife and 10-year-old son to not even watch, and “hopefully” their husband and father would return home. “Hopefully.”

Nobody’s better in pre-taped sit-down interviews than Lesnar. Nobody.

Another Cruiserweight tag team match that doesn’t mean much took place on Monday night, but at least there was some good to come of it for the Glasgow audience. The WWE Cruiserweight Champion, Brian Kendrick, teamed with Scotland’s own Noam Dar to take on Rich Swann and Sin Cara.

Unfortunately for Dar and the home country crowd, he and Kendrick wound up taking the loss after Swann rolled up Kendrick for a quick pin. After the match, Kendrick blamed Dar for the loss, saying he was just like TJ Perkins and failing when it matters the most. Kendrick gave him a cheap shot punch, but Dar recovered and chased him from the ring with a flurry of offense.

There probably wasn’t anything more entertaining on Raw than New Day’s promo dressed up as characters from Braveheart, donned in war paint, kilts and Xavier Woods’ new baby, Agnes.

Luke Gallows and Karl Anderson seemed to be the only team that didn’t have their hearts in the match because they said to all of their teammates’ faces they’d be the first ones to stab them all in the back. But that was after Big E rallied the troops to get them all on the same page.

As for Gallows and Anderson, they picked up a win against the tag team champions with the Magic Killer.

Over on SmackDown, WWE Intercontinental Champion Dolph Ziggler issued an open challenge to anybody on Raw for a title match at Survivor Series. My first instinct was that it was going to be Rusev, because it makes sense and now that his feud with Reigns is over, he should still be in a high profile angle because he’s just that good.

And I was so close. Sami Zayn was apparently chosen as the Raw representative by the general manager, but since Foley wasn’t at Raw on Monday night, the Raw commissioner had to make him earn it. McMahon put Zayn in a match against Rusev with the winner moving on to face Ziggler for the Intercontinental Championship at Survivor Series.

It was a good match, and I was surprised at the outcome. Zayn got the win with the Helluva Kick on Rusev, who was perched on the top rope ready to go for a high-risk maneuver. Zayn vs. Ziggler should be a fun match, but I don’t expect to see the Intercontinental Championship switch brands so quickly. Stay tuned for my Survivor Series preview and predictions next week when I explain why.

• Survivor Series Qualifier: The Shining Stars d. Golden Truth by pinfall after Primo rolled up Goldust and had his feet on the ropes.