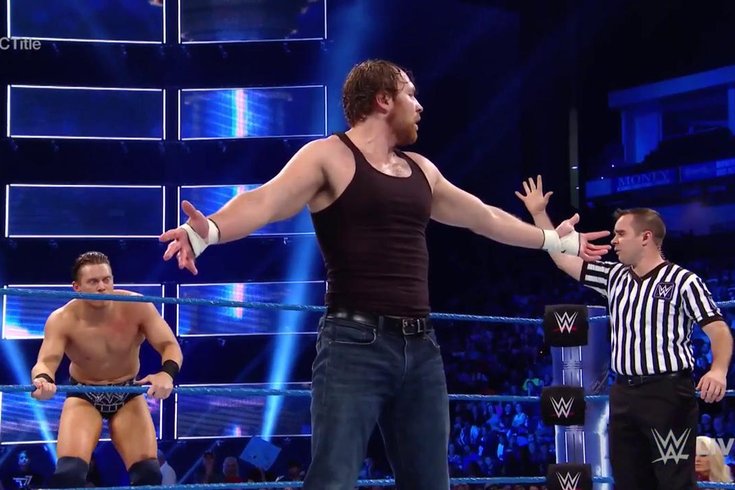 The Miz and Dean Ambrose battled for the Intercontinental Championship Tuesday night. Would Ambrose dethrone the champ?

WWE superstars invaded the Jacksonville Veterans Memorial Arena in Jacksonville, Fla. Tuesday night for the first edition of SmackDown of 2017. The show was highlighted by a main event title match, a contract signing and a big heel turn (I think) that we’ve been waiting a long time to see.

Here’s what went down in Jacksonville on Tuesday night:

The WWE Intercontinental Champion opened the show and went right to the ring to settle some business. The Miz demanded an apology from Renee Young, who slapped him two weeks ago, but he wasn’t getting it.

Dean Ambrose, Miz’s nemesis and Young’s real-life boyfriend, came out to confront his opponent for the night. Miz left the ring and left his wife Maryse inside to confront Ambrose, and she wound up slapping him hard across the face before leaving the ring.

“I guess the hard part of my night’s over, because she hits way harder than you do,” Ambrose said. Can we stop with dumb lines like that? It really serves no purpose.

In the night’s main event, Miz and Ambrose clashed for the WWE Intercontinental Championship. The two always bring the goods and their main event match on Tuesday night was no different. There were plenty of near falls, including one where Ambrose kicked out of the Skull Crushing Finale.

Later in the match, Ambrose was on the outside of the ring and ran into another slap from Maryse. This time, it was right in front of the referee, who was about to call for the disqualification. Ambrose stopped him and instead begged him just to bar Maryse from ringside, which he obliged. Miz sneaked up from behind Ambrose and nailed him in the back of the head with the Intercontinental title belt, but only got a two count. He then was setting up Ambrose for another Skull Crushing Finale, but the Lunatic Fringe countered it into Dirty Deeds to become a two-time WWE Intercontinental Champion.

I’m not sure why they needed a title change here, but at least on SmackDown, everything makes sense. The storyline makes sense, the match made sense and hopefully, we’ll see where this takes The Miz and Maryse now. Is a match against Daniel Bryan waiting in the wings? Stay tuned.

Styles, Cena make it official for the Royal Rumble

If there’s one thing that John Cena’s return to SmackDown has done, it’s re-invigorate the main event scene. Styles-Cena III for the title will be awesome if no other reason because the hype has already been on point and it’s only been a week!

Styles said pretty much what he always says, and then Cena got his chance to respond in the ring as the two prepared to sign the contract to make their title match at the Royal Rumble official.

Cena said Styles made the biggest mistake of his life by pissing him off. Cena said he lost all respect for Styles and called him a, “punk little bi---.” He said that anyone that thought he was gone is mistaken because he’s still here. Cena was pacing back and forth during his promo, showing as much passion as I can ever remember.

Corbin interrupted the contract signing and said that he is the first SmackDown superstar to enter the Royal Rumble match. Corbin and Cena were trading barbs back and forth and Cena was ready to throw some fists, but he was blindsided with a kick from Styles that left him lying in the ring.

Dolph Ziggler’s had enough of just about everything

Dolph Ziggler and Baron Corbin, the two men who lost in the Triple Threat WWE Championship Match last Tuesday night to Styles, went one-on-one in the first match of the night. It was a very good match with both superstars kicking out of high-impact maneuvers. Corbin eventually would defeat Ziggler by pinfall using his End of Days finisher.

Corbin was ready to attack Ziggler after the match with a steel chair, but his old nemesis Kalisto ran out and got the better of him as Corbin just walked away. But that wasn’t it.

Ziggler superkicked Kalisto out of nowhere, much to the delight of the fans in attendance. Many have been clamoring for a character change in Ziggler for months, and this might be exactly what they’ve asked for. Backstage, Ziggler was confronted by Apollo Crews, whom he headbutted to start a brief brawl before it was broken up by Mojo Rawley and Rhyno.

The Wyatts aren’t through with American Alpha yet

The Wyatt Family isn’t done with American Alpha just yet. Moments after the SmackDown Tag Team Champions defeated Breezango in short order, the Bray Wyatt came on the big screen with Luke Harper and Randy Orton behind him and had a message for the team that took their titles from them:

“Nothing lasts forever. So I would advise you to revel in this moment while you still can. Cherish … because sooner or later, reality will hit you. And let’s be honest. You haven’t really won anything just yet. Now you may think that you have stolen the light that binds this family. But the truth is you have only made it stronger. Next week, we’re coming to reclaim what is rightfully ours.”

After Wyatt left, both Harper and Orton stalked towards the camera when Orton blurted out, “Run,” as Harper looked at him with a surprised look. It was as if Orton stole Harper’s thunder. Yeah, this isn’t over by any means.

There are two La Luchadoras!

Becky Lynch would take on La Luchadora on Tuesday night, and the match didn’t last that long. Lynch got the win with the Disarm-Her submission hold and then unmasked the female luchador, revealing her to be Alexa Bliss.

However, that wasn’t the only La Luchadora in attendance. In a throwback to when there were two Doinks at WrestleMania IX, another masked La Luchadora ran toward the ring and her and Bliss beat up Lynch and left her lying.

• Baron Corbin d. Dolph Ziggler by pinfall via the End of Days. Kalisto saved Ziggler from another Corbin attack after the match, but Ziggler turned on Kalisto and laid him out.

• Becky Lynch d. La Luchadora by submission via the Disarm-Her. Lynch unmasked La Luchadora after the match to reveal Alexa Bliss when another La Luchadora ran down and attacked Lynch.

• Carmella d. Aliyah by submission via the Code of Silence.

• WWE Intercontinental Championship: Dean Ambrose d. The Miz (c) w/ Maryse by pinfall via Dirty Deeds. Maryse was sent backstage towards the end of the match after slapping Ambrose.