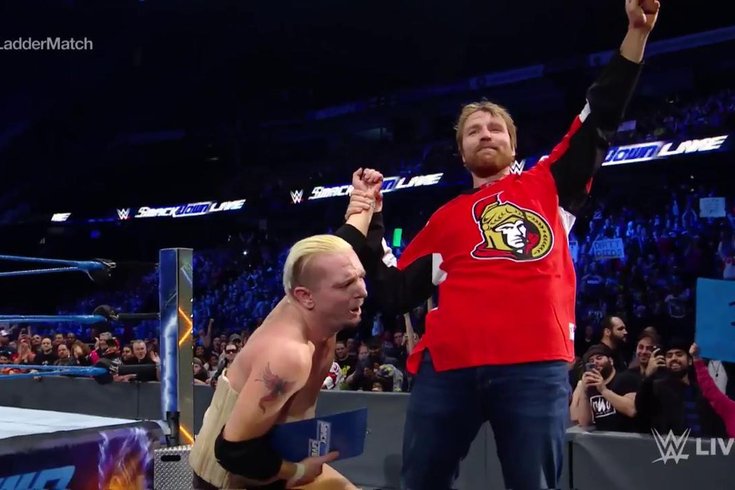 Dean Ambrose was given the night off on Tuesday night, but he didn’t just want to go.

The 901st episode of SmackDown emanated from the Canadian Tire Centre in Ottawa, Ontario Tuesday night, and the build to the brand’s TLC pay-per-view in less than two weeks was full throttle. A lot of these feuds are continuing and need to be freshened up a bit. I’d suggest ending all of these feuds at TLC and having new and fresh feuds build to the Royal Rumble and the next SmackDown-only pay-per-view.

But until then, the focus is on TLC and the feuds leading up to it. Here are the main stories coming out of SmackDown on Tuesday night.

Shane McMahon, SmackDown’s commissioner who also fought in the five-on-five men’s elimination match on his brand’s behalf on Sunday, opened the program looking a little worse for wear as he headed to the ring. He was sore, bruised and battered, but he was still on television even after taking a nasty-looking spear from Roman Reigns that almost assured everyone watching he sustained a concussion.

He may have. He said he felt like he’d just been in a car crash. He said the guys he thought he could trust to get along in Dean Ambrose and AJ Styles let him down, and Randy Orton and Bray Wyatt surprised him. Ambrose came out and kept hitting McMahon on the back and shoulder like they were buddies and said he was focusing too much on the negatives. He brought out Team SmackDown’s mascot, James Ellsworth, to bring a little positivity.

McMahon became a little positive and offered Ellsworth a SmackDown contract. Of course, Ellsworth signed a WWE contract last week, so this was all just for the storyline. AJ Styles came out and was livid that Ellsworth was just being handed a contract instead of earning it. He offered to wrestle Ellsworth in a Ladder Match for the contract. All parties agreed and the main event was on.

However, McMahon kept telling Ambrose to leave the building because he gave him the night off. Ambrose kept coming back in. One of the best segments was when he came back in as a mountie. He said the mountie always gets his man.

Did Ellsworth get his contract?

Ellsworth began the match with his neck brace on, but not for long. Styles ripped it off and quickly went for the contract after beating him up a bit. Styles dominated the match before Ambrose came out wearing an Ottawa Senators jersey. Ambrose and Styles fight for a while before Styles hits Ellsworth with the Phenomenal Forearm. Once Styles looked to be in control to win the match and grab the contract, Ellsworth shoved him to the outside of the ring. When Styles was just getting back into the ring, Ellsworth hit him with No Chin Music, which trapped Styles’ foot in between the bottom and middle ropes. Ellsworth climbed the ladder to retrieve the contract and officially become the newest addition to the SmackDown roster.

Your new No. 1 contenders for the SmackDown Tag Team Championships are...

American Alpha are your new No. 1 contenders for the SmackDown Tag Team Titles after beating The Usos, Hype Bros, The Ascension, The Vaudevillians, and Breezango in a Tag Team Turmoil match. It’s about time they’re in the title picture.

In the first bout, the Hype Bros defeated The Ascension after hitting the Hype Driver on Viktor. The next team out was Breezango, who would eliminate the Hype Bros and then were quickly defeated by American Alpha. Jason Jordan and Chad Gable also eliminated The Vaudevillains and The Usos to become the No. 1 contenders.

However, that might not be for long. Bray Wyatt came on the big screen after the match and warned American Alpha they haven’t dealt with all tag teams. Orton says the Wyatts are more than just a tag team … they’re family. And next week, the Wyatts are coming for American Alpha.

Kalisto and Corbin continue their war

Baron Corbin really doesn’t like Kalisto. Kalisto, in turn, really doesn’t like Corbin. On Tuesday night, they both got involved in each other’s matches. First, Kalisto was given a chance to win the Intercontinental Championship from The Miz, but Corbin interfered. While he didn’t get the better of Kalisto, it still distracted the challenger enough for Miz to hit him with the Skull Crushing Finale and retain his title.

Later on, Corbin was “punished” by being put in a match with Kane. Kalisto interfered, causing the disqualification. A match was then booked for TLC between Corbin and Kalisto. A Chairs Match.

Speaking of The Miz, after he retained his title, Dolph Ziggler hit him with a superkick on the entrance ramp. Miz wasn’t too pleased and later on demanded that Ziggler be suspended. Instead, the SmackDown general manager booked a match between them and said it would be their last match regardless of the outcome. Oh, and it’s going to be a Ladder Match at TLC. That should be good.

• Intercontinental Championship: The Miz © d. Kalisto by pinfall via the Skull Crushing Finale. Baron Corbin came down and tried to interfere, distracting Kalisto enough for Miz to hit his finisher.

• Non-Title: Becky Lynch © d. Natalya by submission via the Disarm-Her.

• Ladder Match for James Ellsworth’s contract: James Ellsworth d. AJ Styles © after he hit No Chin Music and Styles got trapped in the ropes, allowing Ellsworth to climb the ladder and retrieve the contract.