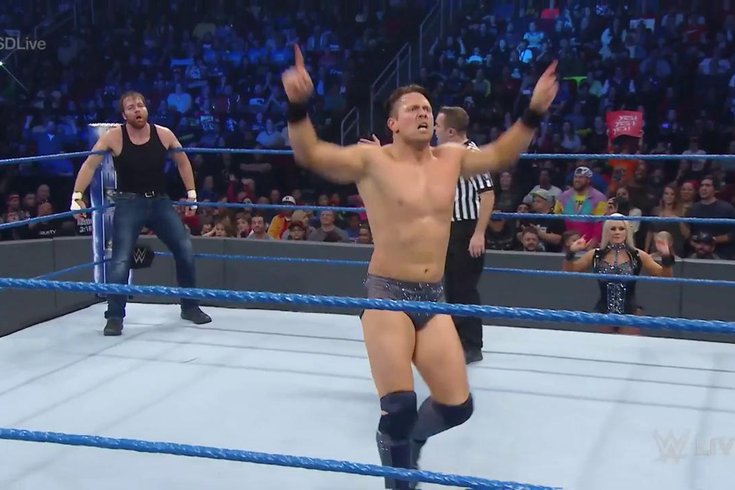 Dean Ambrose looked to let off some steam Tuesday night and go after The Miz’s Intercontinental Championship.

Coming off a fantastic TLC pay-per-view on Sunday night, SmackDown headed to Houston’s Toyota Center on Tuesday night. What would the fallout be from James Ellsworth’s actions in the main event at TLC? Would he have a chance to win the WWE World Championship? How would Dean Ambrose react?

Those questions were answered on Tuesday night, but the answers also left us with more questions.

Let’s see what went down in Houston at the Toyota Center:

After suffering what was reportedly an ankle injury Monday night during a SmackDown live event, AJ Styles opened the program, complete with a walking boot, and announced that he wouldn’t be able to defend his WWE World Championship against James Ellsworth, whose strategy of turning on Dean Ambrose at TLC on Sunday night didn’t pay the immediate dividends he thought it would.

Hilariously, Ellsworth accused Styles of being protected by general manager Daniel Bryan, who didn’t want Ellsworth to become champion. Not to be forgotten, Ambrose arrived and quickly planted Ellsworth with Dirty Deeds, clearly still furious about Ellsworth costing him the title.

The Miz trolls Ambrose one time too many

Later on in the program, Ambrose was a guest on Miz TV. The Miz just keeps getting better and better week after week, and he was on fire Tuesday night. He kept pushing Ambrose’s buttons and gave him the Miz Participation Award for his efforts on TLC. But The Miz’s trolling was soon met with the general manager, who made Ambrose vs. The Miz for the Intercontinental Championship in the night’s main event.

Ellsworth tried to help Ambrose in the main event by pointing out Maryse’s involvement in the match to the referee. All that does is cause a distraction to Ambrose, who was hit with the Skull Crushing Finale and suffered the 1-2-3 defeat.

Alexa Bliss was set to celebrate her title victory over Becky Lynch at TLC when the former SmackDown Women’s Champion entered the ring to confront the new champion. Lynch wanted a rematch and she wanted it then and there, but Bliss scoffed at the notion and left the ring.

No more Heath Slater and Rhyno?

After losing to Bray Wyatt and Randy Orton for the second time in three days, Slater and Rhyno appeared on Talking Smack on the WWE Network. Rhyno didn’t look too happy to start with, and he and Slater went at it a bit. Rhyno walked off the set, so it looks like that tag team is no more.

That’s about all the interesting things that happened on SmackDown. Not a show full of great angles and matches, but it was still very entertaining.

• Natalya vs. Carmella ended in a No Contest.

• Hype Bros. d. The Ascension by pinfall via the Hype Ryder on Viktor.

• Baron Corbin d. Kalisto by pinfall via the End of Days.

• WWE Intercontinental Championship: The Miz © d. Dean Ambrose by pinfall via the Skull Crushing Finale after Ambrose was distracted by James Ellsworth, who was trying to help him.

• Ariya Daivari d. Jack Gallagher by pinfall via a frogsplash.

• WWE Cruiserweight Championship: Rich Swann © d. Brian Kendrick by pinfall via the Swann Song. After the match, Kendrick attacked TJ Perkins, who was at ringside on commentary, but Perkins accidentally superkicked Swann.