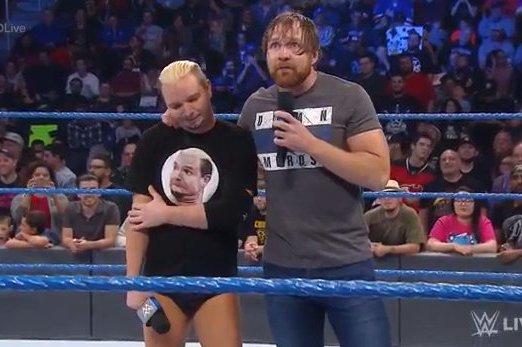 All James Ellsworth wanted to do was apologize to Dean Ambrose. Did he make things worse?

With both main rosters building towards Survivor Series, SmackDown took the extra step on Tuesday night and began building towards their next brand-only pay-per-view in December. They also had a few Survivor Series qualifying matches, which is still a great idea to have instead of how Raw’s doing it with just randomly announcing participants.

In fact, the Prudential Center in Newark, N.J. was also the setting for the announcement of the main event for SmackDown’s next pay-per-view. Only, it was backstage during a Talking Smack segment on the WWE Network. I’ll get into that in a bit.

Ellsworth, Ambrose and Styles, oh my

James Ellsworth opened the program and tried to apologize to Dean Ambrose for costing him his match against AJ Styles last Tuesday. The WWE World Champion interrupted and was trying to coax Ellsworth into giving him an apology, saying Ambrose kept telling Styles during their match two weeks ago to hit Ellsworth harder and harder. The trio eventually got involved physically and Styles laid out both Ellsworth and Ambrose.

Backstage, general manager Daniel Bryan made the main event of Ambrose vs. Styles once again, in a non-title contest, for Ambrose’s last chance for a future title shot and Ellsworth was not permitted to be at ringside.

In order to make sure Ellsworth didn’t come down to the ring, even with his incessant pleading to do so, Ambrose threw him out of the building before the match. But that didn’t stop Ellsworth from finding his way back at ringside during the main event, almost costing Ambrose the match yet again with his distraction. He then was chased throughout the building by security before heading back to ringside and eating an elbow from Styles over the announce table.

Thanks to the distraction, Ambrose countered Styles’ Phenomenal Forearm attempt with a kick and Dirty Deeds to notch the victory as Ellsworth was dragged all the way to the entranceway.

On Talking Smack, SmackDown commissioner Shane McMahon announced the main event for the next SmackDown pay-per-view on December 4, TLC. Styles will be defending his WWE World Championship against Ambrose in a TLC match.

Orton proves his worth to Wyatt

Randy Orton said last Tuesday, “If you can’t beat them, join them,” while referencing the Wyatt Family. His feud with Bray Wyatt has become a contest of mind games and who can outwit the other … or has it? After turning on his partner last Tuesday, Orton faced Kane in a No Disqualification match, and he wasn’t alone. Wyatt and Luke Harper came down to the ring and helped Orton get the victory with their interference.

After the match, Harper clotheslined Kane and Wyatt hit him with Sister Abigail. As Orton posed on the ropes, Wyatt did his infamous kneel down and exclaimed, “Follow the buzzards!”

Alexa Bliss gets a big win

One week prior to their encounter for the SmackDown Women’s Championship in Glasgow, Scotland, Becky Lynch and Alexa Bliss found themselves in tag team action. Lynch teamed with Nikki Bella to take on Bliss and Carmella, who will all be teammates on November 20 at Survivor Series as part of SmackDown’s women’s team. Naomi will also be joining the four, and Bryan made Natalya the team’s coach.

However, on Tuesday night, the focus was placed mainly on Lynch and Bliss. The two will collide next Tuesday in Scotland, and to make that match more important, WWE decided to have Bliss pin the champion after nailing her with a DDT. Simple, effective professional wrestling booking. Booking that makes sense. Yes, the champion got pinned, and some people might not like it. I probably would agree if the person who pinned her didn’t have a title match the next week.

More venom between The Miz and Daniel Bryan

Bryan fought back, claiming Miz is scared of a fight and that he’d have to sit down and shut his mouth and watch Dolph Ziggler come out for an open challenge and defend his Intercontinental Championship against a random SmackDown competitor.

Ziggler’s open challenge ended almost as fast as it started as he hit Curt Hawkins with a superkick to retain his title rather easily. He then issued another open challenge for Survivor Series, this time aiming his sights on the Raw roster, challenging any Raw superstar to fight him for his title.

• No Disqualification: Randy Orton d. Kane by pinfall via an RKO after Bray Wyatt and Luke Harper interfered on behalf of Orton.