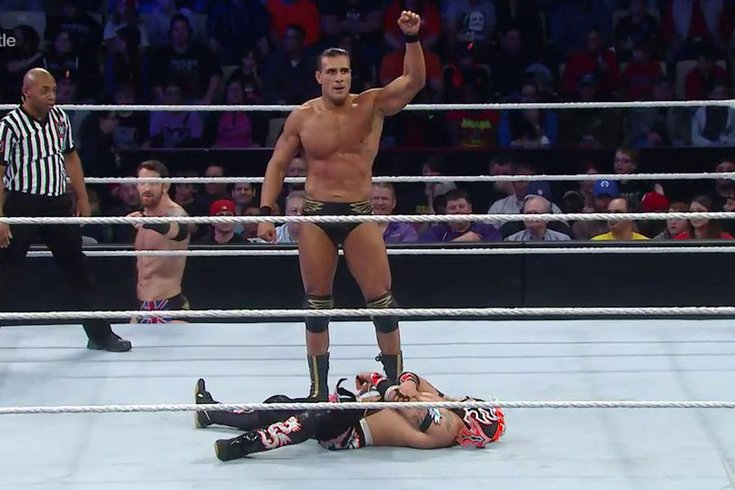 Three nights after losing the United States title, Alberto Del Rio was able to regain it from Kalisto.

Three days after the WWE crew visited New Orleans for Raw, the roster stayed in Louisiana for SmackDown on Thursday night at the Cajundome in Lafayette. The second edition of SmackDown on the USA Network featured a Tables Match, a United States Championship match and a very good women’s match which we’ve come to expect from WWE television lately.

When WWE moved SmackDown to the USA Network, many thought this would be a changed program and WWE would place the utmost importance on it now that it was a part of their flagship television station to air their programming. After Thursday night’s program, that’s probably not going to happen.

Sure, we had a championship match and a Tables match, but when are we going to see more important matches on the show? Let’s see something that gets people annoyed they passed on SmackDown. A United States Championship match is great and all, but where is Roman Reigns? Two weeks on the USA Network, and no WWE World Heavyweight Champion? It doesn’t make sense to me.

The WWE Intercontinental Champion, Dean Ambrose, opened the show with a promo and challenged Kevin Owens to a Last Man Standing match at the Royal Rumble, but was interrupted by Sheamus. It wasn’t exactly the way Ambrose wanted to start the night. Owens and Neville would eventually make their way to the ring for their respective sides and a semi-brawl would take place before the sides separated. This would set up a tag team main event for the evening.

Ambrose and Neville teamed up to take on Owens and Sheamus in the night’s final match in a pretty entertaining encounter. Whenever these four guys get together, some entertaining matches are born. This wasn’t any different.

Owens and Sheamus would get disqualified after Sheamus threw Ambrose into the steel ring steps twice before Owens threw the top of the announce table on him.

Owens would then eat Dirty Deeds from Ambrose and then a Red Arrow from Neville as the program ended. I’m looking forward to the Last Man Standing match between Ambrose and Owens for the Intercontinental Championship at the Royal Rumble. That really has a chance to be the best match on the show.

I said on Monday night that I wouldn’t be surprised if Alberto Del Rio regained the United States Championship back from Kalisto, but “not as early as Thursday.” Well, I was wrong.

In Kalisto’s first title defense since winning the title on Raw, some thought three wins in a row against Alberto Del Rio wouldn’t exactly be in the cards for the masked superstar. We were thinking maybe a disqualification finish or Kalisto getting counted out or something along those lines, right?

Del Rio would have the backing of his League of Nations group while Kalisto didn’t have his tag team partner, Sin Cara, in his corner, as he was nursing his shoulder injury. Del Rio dominated most of the match but had King Barrett in his corner, which played a big role in Del Rio regaining his United States title.

That’s right – Del Rio is now your new United States Champion. In a great spot, Kalisto was able to reach the ropes when Del Rio first applied the hold to his arm, but then crashed and burned when he took a high risk to the outside. King Barrett was there to move Del Rio out of the line of fire when Kalisto flew to the outside, and Del Rio would then apply the cross-arm breaker for the second time and regain the title he lost on Monday night.

That’s kind of a bummer for me. I didn’t think Del Rio should’ve lost the title on Monday night, but I would’ve liked to see Kalisto hold the belt for a little more than three days.

We were treated to the first Tables Match in what felt like ages on SmackDown with the Dudley Boyz taking on Erick Rowan and Luke Harper of the Wyatt Family. They would be joined by Braun Strowman, but he wouldn’t come into play until after the match.

The Dudleyz would win the match after Harper went through a table first, but the Wyatt Family would have the last laugh. They put both D-Von and Bubba Ray through two tables each and stood tall despite taking the loss. I would’ve rather the Wyatts won, but at least they got to keep their heat in a loss.

Becky Lynch and Brie Bella decided to have a go at it… again. Lynch would easily win this one. Now when are we going to see her take that Divas Championship away from Charlotte?

I’ll have my Royal Rumble preview right here next week, so stay tuned!

• Dean Ambrose and Neville d. Kevin Owens and Sheamus by disqualification after Sheamus slammed Ambrose into the ring steps twice and Owens threw the top of the announce table onto him.