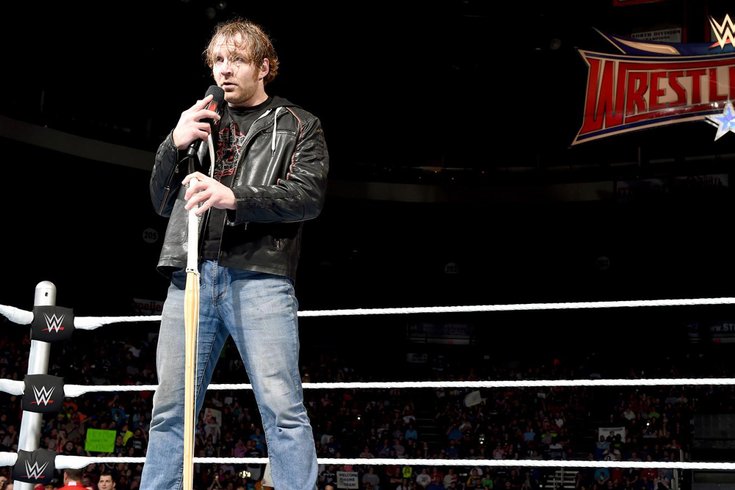 Dean Ambrose went home to Cincinnati on SmackDown and dared Brock Lesnar to show up next week.

On the heels of news breaking that Sting was retiring from WWE officially at his Hall of Fame induction ceremony in Dallas on April 2nd, WWE aired SmackDown from Cincinnati’s U.S. Bank Arena. The hometown of Dean Ambrose played an important role in his day and night, which was pretty cool to see. WWE doesn’t usually hype their wrestlers’ hometowns often, but Ambrose was out celebrating the holiday, so I guess an exception was made because of that.

We also saw a huge main event that many will argue should have been saved for pay-per-view, or even Monday Night Raw. I don’t mind seeing a great main event with two great talents on any show, though.

Reigns vows a repeat of Monday night for Triple H

Roman Reigns opened the show and was as intense as he’s ever been during a promo. He talked about how he beat Triple H down on Monday night and how he’ll do it again at WrestleMania. While Triple H believes in power and money, Reigns believes in a big fight and said he’ll win the WWE World Heavyweight Championship back at WrestleMania. Believe that, yo.

Meanwhile, Dean Ambrose spent this edition of SmackDown out on his hometown celebrating St. Patrick’s Day at Madonna’s Bar and Grill in downtown Cincinnati. Earlier in the program, Ambrose stood in front of a backdrop of downtown Cincinnati, saying Brock Lesnar doesn’t know what pain he can invoke, and he said the same thing at the bar later in the program. That’s where Ambrose has won and lost fights, and he’ll be bringing the Cincinnati fight to Lesnar at WrestleMania.

That wasn’t it for Ambrose. During an in-ring segment with the Social Outcasts, Ambrose made his entrance and took out each member of the group with a kendo stick. He said he would call out Lesnar next Thursday on SmackDown, so it looks like Lesnar will make his second appearance on SmackDown during WrestleMania season after not appearing on the program in 12 years.

Kevin Owens and AJ Styles confronted each other early in the program during a backstage interview segment that set up the night’s main event, which would be a non-title affair. In that promo, Owens brilliantly invokes Sami Zayn and says Styles sounds just like him, insinuating he’s a whiner. If Owens/Zayn isn’t a one-on-one WrestleMania match, WWE has completely dropped the ball.

Anyway, what’s there to say about a match that pits Owens and Styles one-on-one? There was nothing but great stuff between two of the best wrestlers on the planet right now. With Owens’ trash talk to Styles’ acrobatic counters, this was probably one of the best SmackDown main events in recent memory. I would hope the rating this week would reflect that.

While Styles was setting up for the Phenomenal Forearm, Jericho came out and distracted him, allowing Owens to hit the Pop-Up Powerbomb for the win.

In NXT, the Four Horsewomen took women’s wrestling by storm. Now, three of those women are on the main roster, and the other one, Bayley, is currently the NXT Women’s Champion.

The Horsewomen came face-to-face-to-face ahead of their Triple Threat Match at WrestleMania for the Divas Championship. The champion, Charlotte, called out Sasha Banks and Becky Lynch to the ring for a promo and they obliged, but they were met with a buzzsaw as Charlotte ran them down after making it sound like she’d be humble. She said she feels guilty about naming them Horsewomen, but Becky and Sasha would get the last laugh as they attacked her after teasing attacking each other. Charlotte was able to escape after a backstabber by Sasha.

The New Day takes out the garbage

BOOTY! The New Day was in the house in Cincinnati, bringing outtrashbags filled with garbage. But it wasn’t to run down the city as they’ve been accustomed to doing. It’s a New Day, yes it is. The Tag Team Champions are in the middle of a babyface turn and the crowd is starting to become more and more on their side, especially during their feud with the League of Nations.

The New Day’s garbage bags represented Rusev, King Barrett, Alberto Del Rio and Sheamus, and each one they kicked out of the ring after calling each member BOOTY! I laughed.

As for WrestleMania, it looks like the WWE Tag Team Championships will be on the line in a 4-on-3 handicap match as New Day defends against the League of Nations. Nothing was confirmed on SmackDown in regards to member participating, just New Day vs. League of Nations. Though, a handicap Tag Title match would be kind of cool to see.

Kofi Kingston would defeat King Barrett via a rollup.

Kalisto officially accepted Ryback’s challenge and will defend his United States Championship against him at WrestleMania.

• Dolph Ziggler d. The Miz by pinfall via a superkick.

• Bubba Ray Dudley d. Goldust by pinfall after kicking him in the stomach. The Dudleyz attacked Goldust after the match and R-Truth tried to make the save before The Usos came out to really make the save.

• Kofi Kingston d. King Barrett by pinfall via a rollup.