WWE SmackDown rundown: Ambrose, Lesnar battle a common enemy and then each other 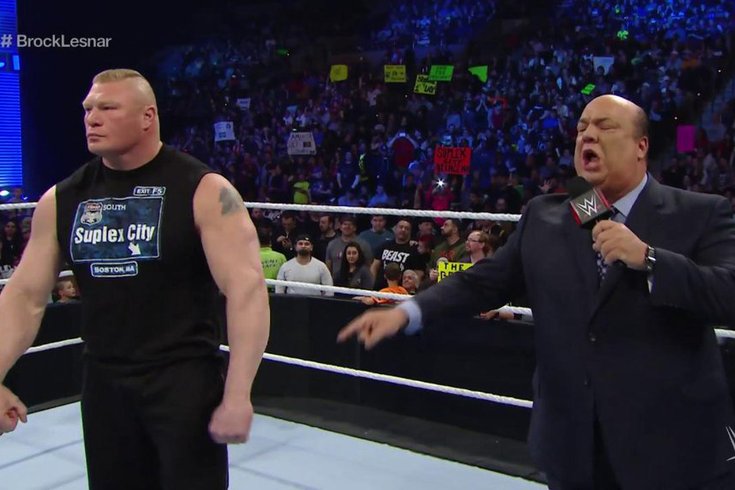 Brock Lesnar and Dean Ambrose took out the enemy before trying to take out each other on Thursday night.

WWE invaded the TD Garden in Boston on Thursday night for SmackDown and since we’re just over a week from WrestleMania, the hype machine is in full effect.

Thursday’s SmackDown didn’t lack much star power like we saw Monday night in Philly for Raw. SmackDown was a lot better in terms of the wrestling and setting up WrestleMania than Monday Night Raw was, especially when The Beast was in the house in Boston. Roman Reigns is back in less talk, more intensity mode where he flourishes, so let’s hope his character stays that way long after WrestleMania.

With the go-home Raw to WrestleMania coming up this Monday night, I’d expect next week’s SmackDown to just be a highlight show with minimal storyline advancement, if any. But Thursday night, we had ourselves a pretty good SmackDown.

Ambrose and Lesnar handle the Wyatts, then each other

Paul Heyman and Brock Lesnar came out for the main event segment on Thursday night, and Heyman made sure to remind us how the Beast Incarnate was responsible for the greatest WrestleMania moment ever when he pinned The Undertaker two years ago.

Heyman then talked about Mick Foley and Terry Funk trying to help Dean Ambrose by giving him weapons to use against Lesnar at WrestleMania. In a rather brutal admission, he said the only reason Foley and Funk are alive is because God doesn’t answer his prayers.

He said what everybody else should be doing is praying for Ambrose and told him to come to the ring. But the Wyatt Family took the cue instead and came out and surrounded the ring. Ambrose came out shortly after and both he and Lesnar took care of the Wyatts. Ambrose tried sending a message to Lesnar and hit him with the kendo stick, but Lesnar wouldn't have any of that and gave Ambrose an F5 and broke the kendo stick in half. What a beast.

I’m looking forward to Lesnar vs. Ambrose at WrestleMania a lot. They’ve done a great job building to it.

Earlier in the night, Reigns confronted Bubba Ray Dudley in a backstage segment where Bubba was talking about The Usos, their father, Rikishi, and the Wild Samoans before Reigns walked up to him and told him he ran his mouth too much, just like Triple H. He said he was going to shut Triple H’s mouth at WrestleMania, and he was gonna shut Bubba’s mouth tonight. After Bubba stuck his finger in Reigns’ face and laughed uncontrollably with D-Von, Reigns said he didn’t want a match, he wanted a fight.

"This is BOSTON, dog. I WANT A FIGHT!" - @WWERomanReigns #SmackDown pic.twitter.com/4CDCdIzQap

The match would pit Reigns and Bubba Ray in singles action, but both men would be counted out of the ring. Reigns hit D-Von with the steel steps outside the ring and spear Bubba Ray and stand tall.

I’ve got to say, I like less talk and more intensity from Reigns. In the segment backstage with the Dudleyz, he was perfect in his role.

Sasha gets a huge win in her hometown

The Divas Champion, Charlotte, and Sasha Banks tangled in a non-title, one-on-one affair as Becky Lynch was on commentary to open SmackDown. I’m not sure why we’re being treated to Charlotte and Sasha on SmackDown, but I’m not complaining.

It was a good match as is always the case with these two in the ring together. Sasha got the surprising win in her hometown of Boston after countering Charlotte’s Figure Eight attempt with a small package.

Becky would attack both women after the match and then Sasha hit Charlotte with the backstabber.

The League of Nations haven’t had their Booty-O’s

The New Day still thinks the League of Nations are hot garbage, and they made sure everyone knew on Thursday night. Sheamus went one-on-one with Kofi Kingston before the duo’s respective groups wage war at WrestleMania. Sheamus got the win with one of the stiffest Brogue Kicks I’ve ever seen after King Barrett distracted Kingston in the ring.

That can’t feel good. It was so ridiculously awesome, WWE provided a super slow motion replay of the kick for all of us to see.

Usos send a message to the Dudley Boyz

The Usos made quick work of The Ascension in a match that probably could’ve been a main event on WWE Superstars. After the twins embarrassed Konnor and Viktor, they each set them up on two separate tables in the ring and performed a double splash on them, sending a visual message to their WrestleMania opponent, the Dudley Boyz.

Zayn and Ziggler get big win

Owens has to be the worst tag team partner ever. He always seems to leave the match he’s involved in, but this time he wasn’t so lucky. Stardust, Sin Cara and Zack Ryder came out by the entrance ramp to prevent Owens from leaving. It didn’t matter much – his team lost after Zayn hit Miz with the Helluva Kick.

I just can’t wait until we see Owens vs. Zayn one-on-one. Let’s hope we get that at Extreme Rules.

Has The Golden Truth finally formed?

Goldust and R-Truth had another pretty entertaining segment. Are they a tag team now?

• Non-Title: Sasha Banks d. Charlotte (c) by pinfall after countering the Figure Eight with a small package. Becky Lynch was on commentary during the match and attacked both Charlotte and Sasha after the match.

• Sheamus d. Kofi Kingston by pinfall via a Brogue Kick.

• Sami Zayn and Dolph Ziggler d. Kevin Owens (c-IC) and The Miz by pinfall after Zayn hit Miz with the Helluva Kick.