WWE SmackDown rundown: Bray Wyatt returns to the ring and takes out one of his former family members 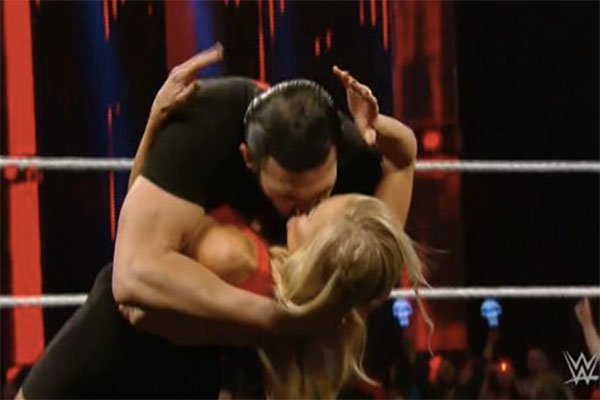 Mizdow plants one on Summer Rae Thursday night on SmackDown.

SmackDown kicked off this week from the American Airlines Center in Dallas with an appearance by the Intercontinental Champion, Daniel Bryan.

Bryan, who was beaten and bloodied a week ago on this program by a returning Sheamus, was interrupted by Bad News Barrett. Barrett will be challenging the Intercontinental Champion for the title at Extreme Rules in less than three weeks. Sheamus also came out at the side of Barrett to verbally run down Bryan.

The two villains were set to do some damage as they stalked to the ring, but a returning Dolph Ziggler emerged from the back to provide some insurance for Bryan. For some inexplicable reason, Big Show came out and made his way to the ring before Roman Reigns’ music hit to a loud ovation from the crowd, and all six men began a battle inside the ring.\

That would set up the main event for the evening, as Bryan, Ziggler and Reigns would team up to battle Barrett, Sheamus and Show.

A @WWERomanReigns' SPEAR gives his team the victory on @WWE #SmackDown!! #BelieveTHAT pic.twitter.com/HvLQmxLR9M

During the main event, there was a loud “We want Roman!” chant, and reports from people in attendance at the tapings on Tuesday said WWE didn’t offer any piped-in cheers, which is common for them to do to try to manipulate the audience to cheer for who it wants it to cheer. Once Reigns got the hot tag, the crowd went absolutely nuts. Is this a sign that the crowd is warming back up to Reigns? Or is Dallas just weird? We’ll find out in the near future.

This was Reigns’ first moment to really shine after WrestleMania.

It’s worth noting that The Authority’s absence from this program was refreshing. While Big Show was in action, there was no Kane, J & J Security, nor any Seth Rollins. It made for an enjoyable, albeit predictable, main event.

"TONIGHT, I will finally destroy @ERICKROWAN ... Imagine what I could do to YOU!" - @WWEBrayWyatt #SmackDown pic.twitter.com/j6R5TDiaQd

Bray Wyatt returned to action after reportedly suffering a bad ankle sprain at WrestleMania while training for his match with The Undertaker. Wyatt talked about taking in Erick Rowan after being shunned by society, and after fixing him, he had to set him free.

This is probably the promo we needed after Wyatt returned from an absence back in October explaining why he broke up the Wyatt Family. Wyatt’s words were fantastic, as usual, and the end result was excellent: If Wyatt could do that to someone he once loved, imagine what he could do to you.

Miz TV returned to WWE television this week, and it featured an argument between the stars of WWE’s newest film, The Marine 4: Moving Target. The Miz himself and WWE diva, Summer Rae, argued in the ring over each being the star of the movie.

After The Miz ran down Mizdow on the mic, Mizdow came down to the ring for a confrontation with his former friend. Of course, The Miz plays the heel perfectly, and demanded an apology from Mizdow and said everything would go back to the way it was before. Needless to say, Mizdow was given a rousing ovation after he decked The Miz and sent him backstage.

Mizdow then laid a big kiss on Summer Rae, who didn’t seem to mind too much. We’re all living vicariously through Mizdow right now.

The New Day continued their slow heel turn as Big E addressed the crowd chanting “New Day sucks!” during their introduction to their non-title tag team match. A great line from Big E that made it pretty clear where this angle is headed: “You have got to like us! You got to love us! Because we’re here for you.” I’m actually looking forward to when this faction makes their, dare I say, long-anticipated heel turn.

Neville made his SmackDown debut after two good matches on Raw the last two weeks, defeating Curtis Axel, who still was sporting his #AXELMANIA shirt. This is easily the most interesting and entertaining Curtis Axel has been since returning to WWE’s main roster.

Earlier this week, WWE officially announced SmackDown would be moving to the USA Network beginning in the first quarter of 2016. This will make the USA Network the exclusive home to all WWE live television content. This move should help SmackDown’s ratings and also make it more of a must-see program than it has been the last few years.

• Non-Title Match: WWE Tag Team Champions Tyson Kidd & Cesaro d. The New Day [Big E and Kofi Kingston] by pinfall via a double combination uppercut by Cesaro and neckbreaker by Kidd to Kofi for the pin.

• Neville d. Curtis Axel by pinfall via The Red Arrow.

• Natalya d. Alicia Fox by submission via The Sharpshooter. Cameron was the special referee, and attacked Natalya after the match was over. The Divas will participate in a #1 contender battle royal for Nikki Bella’s Divas Championship this Monday on Raw.