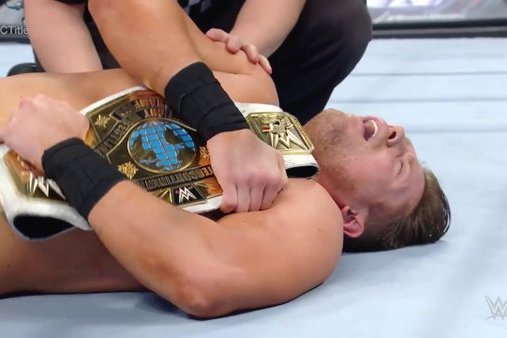 The Miz retained his Intercontinental Championship on Thursday night in a great main event.

Hot off the heels of the announcement that SmackDown will be going live on Tuesday beginning in July, WWE presented Thursday’s edition of SmackDown from the Norfolk Scope Arena in Norfolk, Va.

Yes, SmackDown is taped in advance on Tuesday nights, but that won’t be the case anymore. Beginning July 19th, the show will air live on Tuesdays instead of be taped to air on Thursdays. So I’ll be bringing you Monday Night Raw recaps and SmackDown recaps back-to-back.

Included in the switch to a different night will be a new brand extension for the company, its first since 2011. Raw and SmackDown will have their own rosters, complete with their own creative writing team. Pay-per-views haven’t been decided on yet.

As for Thursday night’s edition of SmackDown, we had another Money in the Bank qualifier and two championship matches. So, here are the main stories coming out of SmackDown:

Michael Cole began the program in the ring highlighting what the Money in the Bank briefcase means to all participants involved. Dean Ambrose, Kevin Owens and Sami Zayn all came out to stake their claim to the briefcase, and then they were joined by Alberto Del Rio, who wasn’t technically in the Money in the Bank Ladder Match just yet. He’d have to defeat Zack Ryder to obtain a spot.

And he did. The first match of the night saw Del Rio defeat Ryder by submission using his cross-arm breaker.

Cesaro had a chance to wrestle away the Intercontinental Championship from The Miz on Thursday night, and that would’ve made a lot of people happy. Who needs people to be happy, though? Surely not WWE.

The Miz played the perfect heel in the match by taking off the turnbuckle and teasing he was going to leave with his wife Maryse and the title. Cesaro got him back in the ring and looked like he had a real chance to become the new Intercontinental Champion, but Miz played the smart heel.

He crawled to the corner and when Cesaro rushed him, he moved out of the way, taking the loose turnbuckle with him, allowing Cesaro to hit the steel and right into the Skull-Crushing Finale.

It was a really good main event, and with the upcoming brand split, these guys can be involved in matches like this every week instead of once a month or so.

The former WWE World Heavyweight Champion conducted a promo in the ring on Thursday night, and once again tried to get the fans to boo him. Nevermind the fact that Rollins was getting cheered even before he got injured last November, but there was no doubt he was going to get cheered when he returned, regardless of how much WWE tried to corrupt the audience into booing him.

Rollins played that up during his promo, asking the crowd if they missed him, which obviously received a huge cheer, and then said he wished he could say the same to the audience and then left the ring.

I’m sure Rollins would rather be a heel at this point – there’s no way WWE will push him further than Roman Reigns – and being a heel is sometimes a fun job for pro wrestlers. I don’t know if this is his idea to be a heel again or WWE’s decision, but the crowd likely won’t be booing him any time soon.

Charlotte begins her path without her father

Women’s Champion Charlotte joined commentary during the Natalya-Dana Brooke match and Jerry Lawler, who’s supposed to be a heel commentator again, dug into her pretty good after she turned on her father Monday night on Raw. He said he’s known Flair almost his whole life and couldn’t believe Charlotte would do something like that. Charlotte’s response? Attack Natalya moments after the match began.

The Women’s Champion and Brooke stood tall after. But that didn’t stop other talents within WWE reacting to what Charlotte did on Monday, so WWE decided to air this clip.

Rusev has a new challenger

Rusev and Kalisto met in a rematch from Extreme Rules for the United States Championship, and when it looked like Kalisto might have a shot at regaining the title by hitting Rusev with a 450 splash, the Bulgarian Brute countered with his knees and then locked in the Accolade to make Kalisto tap out.

After the match, Rusev continued the attack on Kalisto, but Titus O’Neil made his way to the ring and challenged Rusev then and there. The United States Champion backed down, but we’ll probably see these two go one-on-one sooner or later.

It was great to see Enzo Amore return alongside his tag team partner, Colin Cassady, Monday night on Raw. They both made an appearance Thursday night on SmackDown, as well, but were interrupted by the Dudley Boyz, who looked to rekindle their feud with Enzo and Cass before the former sustained a concussion at Payback.

Enzo and Cass challenged Bubba Ray and D-Von to a match, and the former tag team champions teased getting into the ring, but then said they’d face them in a match on Raw this Monday night. So it looks like we’ll see Enzo’s in-ring return on Memorial Day.

• Money in the Bank Qualifying Match: Alberto Del Rio b. Zack Ryder by submission via the cross-arm breaker.

• United States Championship: Rusev  (c) w/ Lana b. Kalisto by submission via The Accolade. After the match, Rusev attacked Kalisto before Titus O’Neil came out to challenge him.

• Fandango/Tyler Breeze d. Goldust/R-Truth by pinfall after Breeze hits the Super Model Kick on R-Truth and Fandango picks up the pin.