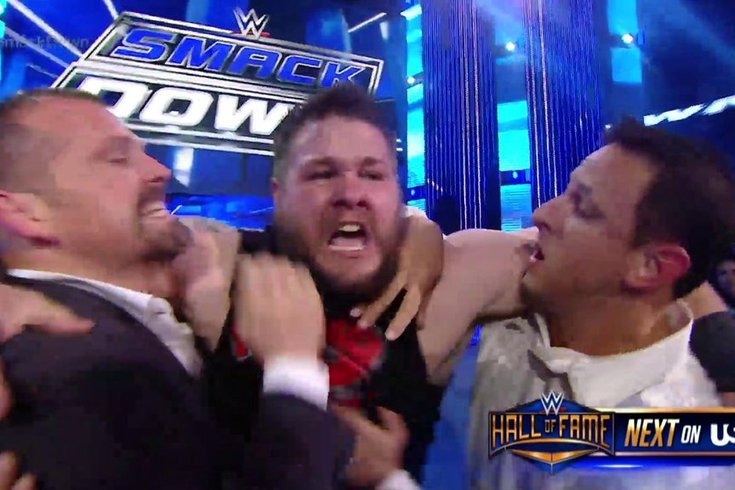 Kevin Owens had to be held back after shoving Sami Zayn into the steel steps.

Another NXT tag team was called up and made their main roster debut, the new No. 1 contender to the WWE World Heavyweight Title confronted the champion, and Natalya looks like she’ll be next in line to challenge Charlotte for her Women’s Championship.

While it was an entertaining episode of SmackDown, the ending of the main event might have been the best part of the night. We were afraid the feud between Sami Zayn and Kevin Owens was either put on hold or over. It turns out that the two might clash at Extreme Rules if they keep on track. Stay tuned to find out what happened.

Reigns and Styles face off

The WWE World Heavyweight Champion, Roman Reigns, opened the program Thursday night and carried himself with the same attitude he had on Monday night. It was kind of the cool, cold character who didn’t react much to the boos. He once again stated he was “The Guy” and that he was gonna do what he had to do, and that was to beat AJ Styles.

This was met with a ton of boos.

Styles’ music hit, and as he got into the ring, Reigns had a look of almost disgust for him, something he also displayed on Raw during his in-ring promo when Zayn arrived to join Jericho, Styles and Owens. If Reigns is on his way to becoming the cocky, I’m too good for everybody type of heel, I think that’ll be the best way WWE can utilize him today, because Reigns as a babyface won’t cut it right now.

Styles congratulated Reigns for becoming the champion, and the two shook hands. Styles reminded Reigns that he’s no newbie and that he’s been all over the world, even holding World Championships. Reigns talked about how Styles hasn’t been there long and if he wants to even sniff the title, he’d have to go through Reigns to do so. I mean, that sounds plausible.

Reigns said, “You beat a lot of guys. You have. You’ve been all over the world. But you’ve never beaten me. And you never will.” Foreshadowing? Slow, tense buildup to possibly a great feud brewing in the near future?

Reigns tapped Styles’ shoulder before leaving the ring, almost in a condescending manner.

Dean Ambrose returned to television after being beaten and battered by the Beast, Brock Lesnar, at WrestleMania. In a virtual squash, he defeated Tyler Breeze, who’s a glorified Barry Horowitz now. Only Horowitz had a better gimmick.

OK, I’m kidding. I like Breeze’s gimmick. Not that it matters, anyway.

After Ambrose’s match, Chris Jericho’s pyro and theme music hit rather quickly, and Ambrose stopped and stared him down as he was walking up the ramp. Jericho didn’t give Ambrose the satisfaction of even looking in his direction. Could this be the next feud on the horizon?

Jericho’s entrance led to the main event, a tag team affair with Cesaro and Styles teaming with to take on Kevin Owens and Jericho.

At the end of the match, Zayn appeared and was being held back by WWE officials. This took Owens off his game, who was completely distracted in the ring. That allowed Styles to take advantage and roll him up for the victory.

So after his WrestleMania loss to Jericho – which, yes, still means something – Styles has pinned Jericho to become the No. 1 contender to the WWE World Heavyweight Championship and pinned Owens. Not a bad way to bounce back.

Both Owens and Zayn started brawling after the match with Owens getting the upper hand after tossing Zayn into the steel steps. If you’ll remember, Owens took out Zayn with a powerbomb through a table backstage Monday and rendered him unable to compete in the Fatal 4 Way No. 1 contendership match in Raw’s main event.

Natalya defeated Summer Rae in rather quick fashion with the WWE Women’s Champion, Charlotte, sitting at ringside on commentary to take in the action.

Emma is up for good… for now

As for the women’s division, Emma is apparently remaining on the main roster as she confronted Becky Lynch during a backstage interview with Renee Young. Emma made fun of Becky’s black eye, which was damaged in the Triple Threat match at WrestleMania. I’m digging the multiple women’s angles in WWE recently.

The Miz and Maryse – the perfect match

Speaking of women, Maryse is also back full-time, for the time being at least. She’ll be Miz’s valet/manager after she re-debuted on Raw Monday night. In a return match for the Intercontinental Championship, Zack Ryder once against lost to Miz after Maryse distracted him, allowing Miz to finish him off with the Skull-Crushing Finale. It’ll be fun to see a real-life married couple in The Miz and Maryse have a chance to reinvent their respective careers… you know, if WWE lets them.

The beauty is that their on-screen characters are so similar, so I’m eager to see how much chemistry they can have. I’m surprised at how much I like this.

Ryder wasn’t happy about the loss, that’s for sure.

I loved The Vaudevillains in NXT, and their first match on the main roster was very solid. The Lucha Dragons offered them a good match, and the right team won. Hopefully this act translates well to the audience throughout the next few weeks, because I’m 100 percent on board with these guys and Enzo Amore and Colin Cassady vying for the WWE World Tag Team Titles, held by The New Day.

And their promos are pretty good, too.

It looks like Primo and Epico are making a comeback. The tag team scene in WWE is on fire now.

Look who's coming to #RAW THIS MONDAY LIVE on @USA_Network! @DrPhil #SmackDown pic.twitter.com/ZFnc9wK8dU

And don’t forget! Dr. Phil will be the special guest host on Raw this coming Monday! I imagine there will be some McMahon Family skit with the doc trying to figure out why their family is so dysfunctional.

• The Vaudevillains d. Lucha Dragons by pinfall after they hit their Whirling Dervish finisher on Kalisto.

• Natalya d. Summer Rae by submission via the Sharpshooter. Charlotte was on commentary during the match.

• AJ Styles and Cesaro d. Kevin Owens and Chris Jericho by pinfall after Styles rolled up Owens as Sami Zayn distracted him.