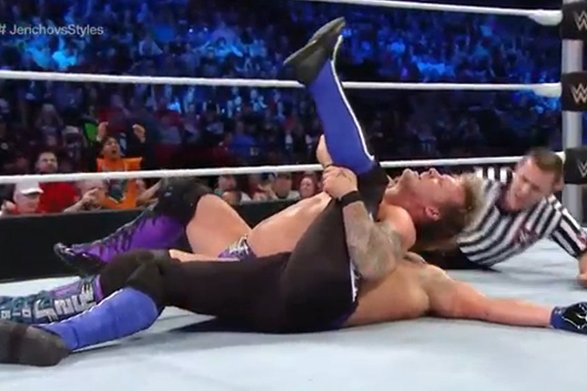 Chris Jericho picked up the victory over AJ Styles Thursday night, almost guaranteeing a tiebreaker match between the two in the future.

Life after Daniel Bryan’s retirement officially began on Thursday night at the Moda Center in Portland, Ore. On Thursday, I wrote about why Daniel Bryan’s only option was retirement, and SmackDown’s main event kind of felt like a small tribute to him in a way.

No, there was no mention in and around the match about Bryan, but these are the kinds of matches Bryan excelled in, so it almost felt like this match was for him. And it was a pretty good match.

Brock Lesnar was also advertised for SmackDown next Thursday night on the final stop before Fastlane. Lesnar, of course, will be participating in a Triple Threat No. 1 Contender’s Match in the main event of that pay-per-view against Dean Ambrose and Roman Reigns.

Lesnar on SmackDown is pretty huge, so, hopefully, WWE is finally turning a corner in making SmackDown appointment television again.

Here are some of the main stories coming out of SmackDown:

I expected Styles-Jericho II to be a classic on Thursday night. While the match was very good, it just seemed to lack something. It hit me in the middle of the match – Jericho was going to win the match to probably set up a third match in the series between the two, and that match would probably mean something.

There is an Intercontinental Championship and United States Championship title shot on the line that could possibly find its way into the third match in this series that would actually make this mean something. Styles and Jericho could have the greatest series of matches in the history of professional wrestling, but if it’s not for anything, how much does it really matter?

Don’t get me wrong – I love seeing Styles and Jericho have a great match. Now the series is tied 1-1. We’re likely going to have another match. But if nobody comes out of that – specifically Styles – with something to fight for, this is just pretty much putting on good wrestling matches for the sake of putting on good wrestling matches. Where’s the story? Nobody cares if Styles or Jericho are better than each other.

Oh, and these guys teamed up in the first match of the night against the Social Outcasts for some reason.

The true Dudley Boyz are back! The brothers from Dudleyville are armed with new attitudes and have now injected a little more life into a tag team division sorely in need of some action. The New Day can only salvage an entire division for so long. And now we have the heel Dudley Boyz.

In an in-ring promo, Bubba Ray said that he and his brother D-Von were sick and tired of hearing about Bryan retiring and they were tired of being seen as a nostalgia act by the fans. Tables surrounded the ring, but Bubba Ray explained that this would be the last time the crowd sees them, because he called the ring crew down to take them away. They then both left with a table, perhaps the last table we’ll ever see!

Bray Wyatt said during an in-ring promo that the Wyatt Family has their eyes set on destroying all of the titans in WWE. Just look at Kane. How about the Big Show? Ryback? Throw in The Undertaker from Hell in a Cell.

Now, does this set up a possible return for the Dead Man? I’m not sure. But it wouldn’t surprise me at all.

Team B.A.D. officially imploded as Sasha Banks took Naomi to school on Thursday night. Banks has said she doesn’t need Tamina or Naomi in her corner, so naturally, they both turned on her. This was Sasha’s chance at redemption, and she made the most of it.

• Chris Jericho and AJ Styles d. Adam Rose and Curtis Axel by pinfall via Styles hitting Rose with a springboard elbow after blind tagging Jericho. Jericho hits the Codebreaker on Styles after the match.

• Chris Jericho d. AJ Styles by pinfall via the Codebreaker.