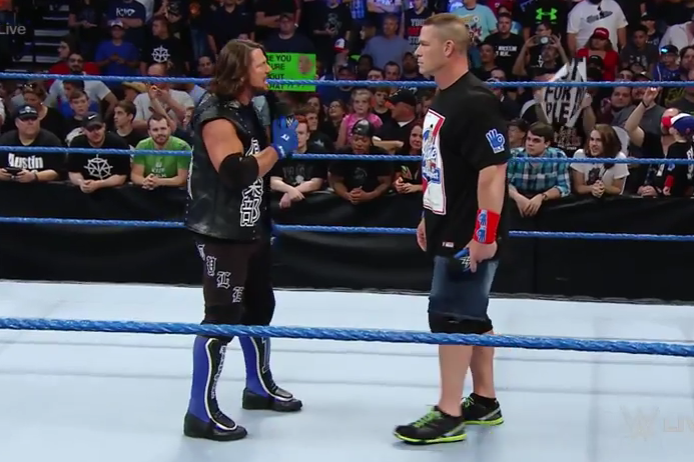 AJ Styles challenged John Cena to a match at SummerSlam in Brooklyn on August 21, and Cena accepted.

The Bridgestone Arena in Nashville, Tenn. hosted the third edition of SmackDown Live on Tuesday night, and I’d have to say it was a lot better than the previous week’s edition. Tuesday’s episode was meant to give meaning to the upcoming Dean Ambrose vs. Dolph Ziggler match at SummerSlam for the WWE World Championship, but Bray Wyatt stepped in to try and throw Ziggler’s journey off course.

AJ Styles and John Cena had a heated promo, which might have been one of Cena’s best ever. And there was no room for women’s matches, unfortunately. Why? I haven’t the slightest clue.

The cool thing is WWE Network introduced a new show called Talking Smack that will be aired every Tuesday after SmackDown goes off the air. We’ll include some highlights here.

Would Orton feel the wrath of Lesnar?

The program began with commissioner Shane McMahon and general manager Daniel Bryan adding a bunch of security for the night due to Randy Orton hitting the RKO on Brock Lesnar at Raw on Monday night. While McMahon was angry at Orton for “possibly messing things up” by showing up on the other brand unannounced, he still thought it was pretty cool.

Orton would take on Fandango in one-on-one action after the latter took offense to Orton’s comments about him at Battleground while on The Highlight Reel with Chris Jericho. Not surprisingly, The Beast showed up through the crowd and was able to run through security as Orton hit the RKO on his opponent, F5’ing Orton and exacting revenge from Monday night.

I originally wasn’t thrilled with this match, but I think WWE is building it well for what it is. The interpromotional angle is still pretty cool, especially the way each of the authority figures on Raw and SmackDown have reacted the last two nights.

Ziggler shows fire and passion in journey to SummerSlam

The WWE World Champion Dean Ambrose opened the program with a promo in the ring and was joined shortly after by his challenger at SummerSlam, Dolph Ziggler. Ambrose went into quasi-heel mode and told Ziggler he’s not as good as he thinks before heading backstage.

Bray Wyatt appeared and took Ziggler out with Sister Abigail before challenging him to put up his No. 1 contendership against him in the main event. Ziggler went to McMahon and Bryan after and told them he wanted the match despite Bryan trying to talk him out of it.

After Ziggler’s win, he began yelling at Ambrose, who was on commentary for the match. Erick Rowan attacked Ziggler, so I guess the Wyatt Family is still intact… sort of.

Ambrose tried making the save, but was quickly disposed of by Wyatt and Rowan as the duo leaned over the prone body of Ziggler as SmackDown went off the air.

That didn’t stop Ziggler from joining Talking Smack after the show on the WWE Network.

We’ve got Styles vs. Cena II

AJ Styles was preparing to send a message to John Cena, but Cena didn’t waste any time joining him in the ring. With both guys having a pinfall victory over the other, this might truly be the rubber match between the two. However, Battleground’s contest was a six-man match, so that doesn’t count as Styles vs. Cena II.

Styles showed plenty of emotion, trying to call out Cena for being a fake and not being a true version on television of who he truly is. Cena wasn’t having that. He talked about how much he loves the business, the fans and everything else, basically. And for someone like Styles, who hasn’t been in one place his entire career, to call him out for “still being here,” he asked Styles why he was the one that was here.

I loved this promo and it was filled with emotion and passion. Cena’s done a great job with promos like these in the past, and Styles is absolutely a natural. SummerSlam is stacked.

American Alpha made their main roster debut in a sound defeat of The Vaudevillains. It’s a shame for Simon Gotch and Aiden English because I think they can really add something to a program, but haven’t been given a fair shot as of yet.

Also, why not just debut Jason Jordan and Chad Gable against a couple of jobbers, much like Raw has been doing with Nia Jax and Braun Strowman? The company didn’t have to feed Gotch and English to the new guys. Whatever.

The No. 1 contender for Miz’s Intercontinental Title is…

Apollo Crews won a No. 1 contender’s match for the Intercontinental Championship against Baron Corbin and Kalisto. He’ll take on The Miz, who was at ringside on commentary for the match, along with Maryse.

Crews would roll up Kalisto to get the victory, but Corbin wasn’t ready for it to be over. He attacked Crews and then after Miz hit Crews with the Skull Crushing Finale, Corbin hit the champion with End of Days.

I still think Corbin’s going to be a big player on this roster for months to come.

So, what about that women’s division?

Becky Lynch and Eva Marie were set to go one-on-one but after the latter’s entrance, she grabbed at her left leg as if she injured it. So there was no match and no follow up.

Carmella was set for action, but Natalya attacked her during her entrance for some reason. The two had a confrontation on SmackDown’s new live interview set during the program, so I’m assuming those two will meet in the near future. But having two women’s matches not even begin? Not good.

And WWE is planning on introducing a Women’s Championship to SmackDown. For as many good things they have done for the women’s division this last calendar year, SmackDown’s women’s division reminds me of how WWE treated that division before AJ Lee and Paige really began the turnaround.

• Triple Threat Match for the No. 1 contendership to Intercontinental Championship: Apollo Crews d. Baron Corbin/Kalisto by pinfall after rolling Kalisto up. Corbin attacked Kalisto after the match, and Crews made the save. The Miz came in from commentary and hit Crews with the Skull Crushing Finale and then Corbin hit Miz with the End of Days.

• American Alpha d. The Vaudevillains by pinfall via Grand Amplitude.

• Randy Orton d. Fandango by disqualification after Brock Lesnar came through the crowd and got through security to give Orton an F5.

• No. 1 contendership to WWE World Championship: Dolph Ziggler d. Bray Wyatt by pinfall via a superkick after nailing Wyatt in the expose turnbuckle. Erick Rowan attacked Ziggler after the match.