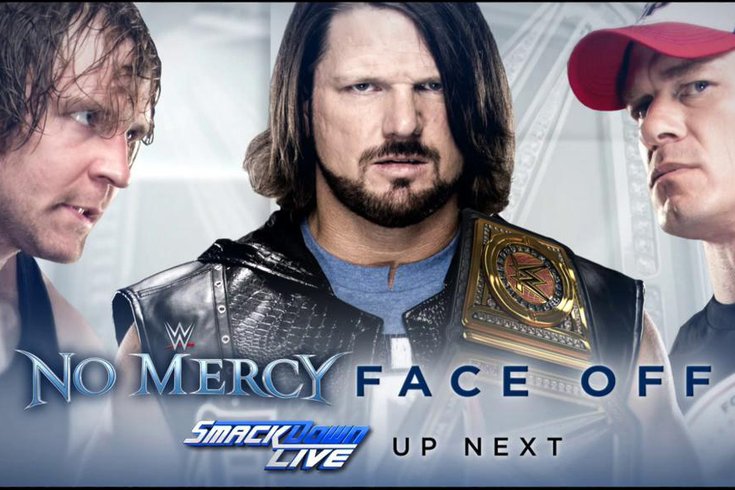 AJ Styles and John Cena face off ahead of Sunday’s No Mercy pay-per-view. Not pictured: Dean Ambrose.

The go-home show to Sunday’s No Mercy pay-per-view took place on Tuesday night from the Valley View Casino Center in San Diego. The two biggest storylines right now on SmackDown surround the WWE World Championship with AJ Styles, John Cena and Dean Ambrose, along with what could perhaps be Dolph Ziggler’s last few days as a WWE superstar.

Tuesday night, we saw some great stuff from the latter when Ziggler’s former teammates from the Spirit Squad attacked him during a Miz TV segment. Jack Swagger also notched his first victory on the SmackDown brand against a pretty surprising opponent. And Alexa Bliss opened some eyes heading into her big title match on Sunday night.

Here’s what went down on the go-home to No Mercy edition of SmackDown:

Styles, Cena and Ambrose face off

AJ Styles came out and talked about how he became The Face That Runs The Place after defeating John Cena twice and becoming WWE World Champion at Backlash. Dean Ambrose interrupted him and referred to the champion as The Clown That Runs The Town, The Pest That Runs The Nest, and then Chump.

Ambrose said he respected Styles for what he’s done around the world, but he took the low road in defeating himself for the championship. Ambrose then called out Cena, saying he showed his true colors by interfering in his championship match against Styles last Tuesday. He said Cena should be thanking him for bringing the title to SmackDown so he could even have a chance at tying Flair’s record.

Cena’s music hit, but before he could speak on the mic, Styles told him to shut up because we already know what he’s going to say. He calls him out for comparing himself to Ric Flair and having the possibility of tying his record 16 World Championships. Instead of worrying about Flair, Cena should be worrying about Styles. This was a great promo and Styles has gotten even better during his time in WWE.

Ambrose then took shots at Cena, saying he can’t out-hustle him. Ambrose cites his zero sick days and zero days in the injured list. Ambrose said Cena doesn’t respect him because he doesn’t suck up to the people in charge and doesn’t ask him for advice. Cena simply said, “Talk is cheap!” and attacked Ambrose. Styles tried stepping in but Cena laid him out and it looked like he’d stand tall as SmackDown went off the air.

Styles attacked Cena and would eventually lay him out with the Phenomenal Forearm and stand tall. Except … Ambrose was still stirring and laid out Styles and would stand tall as the program finally came to an end.

That was a great ending and I could really see any three of these guys winning on Sunday night. They’ve done a good job building Ambrose so he doesn’t seem like an afterthought in this match.

Dolph Ziggler was a guest on Miz TV Tuesday night, which could very well be his last appearance on SmackDown. The Miz paid homage to his opponent at No Mercy by airing “The Success of a Failure,” a documentary focused on Ziggler’s shortcomings during his career.

This was awesome. This is the kind of second-level storytelling WWE has lacked in recent years. It was a perfect way to build to Sunday’s match and even if Ziggler wins, it won’t take away how great the video package along with this segment was.

Miz said if his career was as bad as Ziggler’s, he would have quit WWE a long time ago. Ziggler responded by saying for every ten bad things he’s gone through, there would be that one moment where fans would make him continue. He cites the Make-A-Wish Foundation and his title win the night after WrestleMania 29 as a couple of the reasons he can’t walk away.

Miz said he was finished. But he wanted to raise his spirits. He introduced Ziggler’s old teammates from the Spirit Squad. Kenny Dykstra and Mikey Mondo came out and did a cheer for Ziggler before attacking him. He was able to fend them off and go after Miz. The Intercontinental Champion was able to get out of harm’s way.

Since Randy Orton wasn’t ready to go back on September 11, Bray Wyatt took on Kane at the Backlash pay-per-view. That is, of course, after he defeated Orton by forfeit, which will go down in the record books. Wyatt, however, lost to Kane that night, so he would likely get his revenge and a big win heading into Sunday’s tilt against Orton, right?

Well, you would think that would make sense. But, this is WWE, and wins and losses don’t matter, right? Wyatt gained the upper hand on Kane during this match and did his patented spider walk, but Orton appeared on the big screen … upside-down and all … causing Wyatt to become distracted and eventually get counted out of the ring. He teased jumping back in the ring after Kane sent him to the outside, but he let the referee count to ten.

Later in the show, Wyatt was looking for Orton and fell right into his trap. Orton locked Wyatt in a storage locker with his rocking chair. Wyatt sat down in the chair and reached out for Sister Abigail. Moments later, Orton opened the door and Wyatt had disappeared. Furious, Orton threw the chair against the wall and left it laying.

Heading into No Mercy, Bliss is on a roll. Ahead of her first one-on-one Women’s Championship opportunity, the Blissful One pinned the SmackDown Women’s Champion, Becky Lynch. Following a disqualification loss to Nikki Bella, Bliss and Carmella teamed up to take on Bella and Lynch in a tag team match.

I expect Lynch to be the SmackDown Women’s Champion for a while, so I don’t take anything from this other than it gives the audience a reason to think Bliss has a chance to win the title on Sunday night.

Jack Swagger gets his first win on SmackDown

Interestingly enough, Jack Swagger’s first win post-brand split came against one of SmackDown’s hottest wrestlers in Baron Corbin. However, I won’t take anything from this, either, because Swagger won’t get the better of Corbin long-term. And the way the match ended leaves more questions than answers as Corbin flipped out at ringside.

Goldberg returning to the ring?

The last few days have featured many rumors about Bill Goldberg returning to WWE for one match. With his inclusion into WWE 2K17 and the promotional push behind that, Goldberg could very well be in line for at least one return match. And, according to Jim Ross, it’s practically a done deal.

Another source says that @Goldberg vs @BrockLesnar is a done deal and that it will likely go down at #SurvivorSeries. If true, bravo @wwe

If Goldberg does return, and the rumored match with Brock Lesnar happens, Goldberg will likely be on the Raw brand. The former WCW and World Heavyweight Champion will make an appearance Wednesday night on ESPN’s SportsCenter. Stay tuned.

• Nikki Bella d. Alexa Bliss by disqualification after Carmella attacks Nikki at ringside. Becky Lynch ran down for the save, leading to a tag team match.

• Hype Bros d. The Vaudevillains by pinfall after hitting the Hype Ryder on Aiden English.

• Jason Jordan w/ Chad Gable d. Jey Uso w/ Jimmy Uso by pinfall via a rollup. Jimmy and Jey attack Jordan and Gable after the match, but Heath Slater and Rhyno come down for the save.