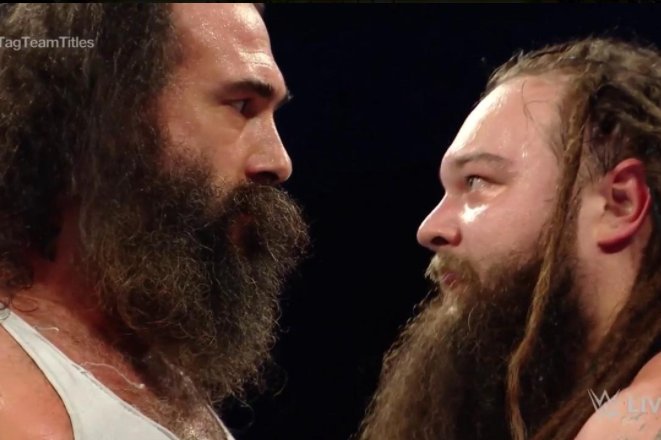 The Raising Cane’s River Center in Baton Rouge, La. was the site of SmackDown Tuesday night as WWE’s best brand looked to continue their momentum of a streak of fantastic shows over the last few weeks.

It was a fitting name for the arena as Tuesday night showed raising emotions for many of the SmackDown superstars. With Raw looking full-fledged ahead to the Royal Rumble, it almost seems like SmackDown is taking a week by week approach and making sure each of their television shows leading up to the next pay-per-view mean as much as possible.

For instance, there were a couple angles that played out on Tuesday night that may have been able to wait for January 29 in San Antonio, but then that would make SmackDown’s shows up to that point ostensibly meaningless.

And if we’ve learned anything about Raw, it’s that meaningless shows leave a lot to be desired.

Let’s tackle what went down Tuesday night in Baton Rouge:

Could Baron Corbin get a win over John Cena?

John Cena continues to throw his weight around on SmackDown, because, well, he can. The 15-time World Champion locked up with Baron Corbin in the night’s main event. The WWE Champion, AJ Styles, who will appear on ESPN’s SportsCenter Thursday night at 9:00 P.M., watched the match from ringside while joining the already overstuffed commentary table.

I honestly thought Corbin would win here, with Styles’ appearance and how great the SmackDown writing team has made Corbin look over the last several weeks. But, alas, I should’ve realized a win for Cena is more important than a win for Corbin since Cena’s heading into a championship match at the Royal Rumble.

Honestly, if anyone can afford a loss in WWE, it’s Cena. They made the wrong call here. Especially considering there can be serious money in a Cena-Corbin feud down the road. Maybe they’re saving Corbin’s big win for later … hey, I can hope. The match was running a bit long and while it made Corbin look okay, Cena pretty much handled him easily during the finishing sequence, finishing him off with the Attitude Adjustment.

Cena and Styles closed the show staring each other down.

The Wyatts continue slow burn to the ground

American Alpha defended their SmackDown Tag Team Championships against Bray Wyatt and Randy Orton, with Luke Harper in the Wyatts’ corner at ringside. Last time, a miscommunication between Orton and Harper cost the Wyatts the match. Would this time be different?

In short … no. American Alpha retained the championships after Chad Gable rolled up Orton after a miscommunication between Orton and Harper. The two shoved each other after the match, which ended with Harper accidentally superkicking Wyatt in the face as he was trying to ease the tension.

Unfortunately, that seems more of the story than American Alpha’s title reign at this point. Hopefully down the road, they can become the story instead of taking the back seat. As for the Wyatts, does anyone really think this is good timing for a split? I figured they’d have made it last until before WrestleMania, where Orton and Wyatt would face each other in the blowoff. Now, it seems like we could be headed in that direction, but there’s no slow burn anymore. Continuing animosity between Orton and Harper doesn’t bode well to dragging this out another three months.

However, I could see both Orton and Wyatt kicking Harper out of the group – which is where Orton finally gets Wyatt to himself and turns on him. Then Wyatt has a feud waiting with Harper after his feud with Orton. Booking ahead is always a crapshoot, but it seems like it’s the only logical conclusion to this angle.

Dean Ambrose and The Miz aren’t finished yet

WWE’s new Intercontinental Champion opened the show up with his own talk show, the Ambrose Asylum. He announced he’d be entering the Royal Rumble match. The Miz interrupted him and declared his entry into the Rumble match, also, and then swiftly tried attacking Ambrose. He got a couple of good shots in, but Ambrose was able to hit Dirty Deeds after Maryse accidentally slapped her husband as Ambrose moved out of the way.

Becky Lynch is going to get one more shot [at least] at regaining the SmackDown Women’s Championship from Alexa Bliss.

IT'S OFFICIAL: Women's Champion @AlexaBliss_WWE defends her title vs. @BeckyLynchWWE inside a #SteelCage NEXT WEEK on #SDLive! pic.twitter.com/k8P1uZErVG

SmackDown general manager, Daniel Bryan, announced Tuesday night that Bliss will defend the title against Lynch in a steel cage next Tuesday to make sure there are no more interferences from La Luchadora. Whoever it is. Whoever it will be. Maybe they’ll come out from under the ring this time around?

Speaking of steel … Dolph Ziggler notched another loss on Tuesday night as Kalisto pinned him. After the match, he lost it and attacked Kalisto. Apollo Crews tried making the save, but Ziggler got the upper hand and completely demolished a steel chair on the backs of both Kalisto and Crews, leaving them laying in the ring.

Last week wasn’t a fluke. Ellsworth is here to stay by Carmella’s side. As long as she’ll have him.

One of the best moments in Royal Rumble history. Bar none.

• Natalya vs. Nikki Bella ended in a No Contest. Bella attacked Natalya before the bell, but Natalya got the upper hand eventually and locked in the Sharpshooter to further injure her rival.

• Kalisto d. Dolph Ziggler by pinfall via a crucifix. Ziggler attacked Kalisto and Apollo Crews after the match with a steel chair.

• John Cena d. Baron Corbin by pinfall via the Attitude Adjustment. AJ Styles was at ringside for commentary.