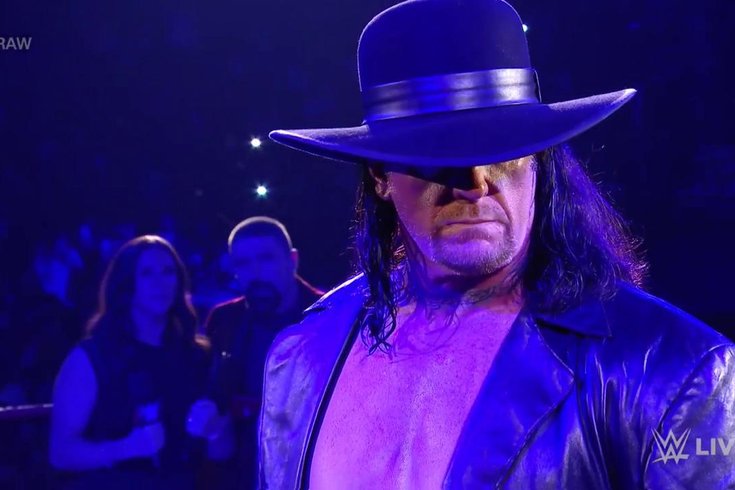 Despite being on the SmackDown roster, The Undertaker showed up on Raw Monday night to make a big announcement.

Monday’s edition of Raw emanated from the Smoothie King Center in New Orleans. The show was primed to be packed with a 2-on-1 Handicap Match for the United States Championship and appearances by both Shawn Michaels and The Undertaker.

If you’re asking yourself why Michaels and Undertaker would be on Raw in January 2017, I wouldn’t blame you. But, there was good reason for that.

An official announcement was made for the host city of WrestleMania 34, which will return to New Orleans in the Superdome in 2018, just four years after it was last in The Big Easy. This was a confirmation of Pro Wrestling Sheet’s Ryan Satin reporting last week that WrestleMania would be returning to New Orleans.

According to multiple reports, Philadelphia was one of the favorites to land the event next year, but ultimately, New Orleans put in a better money offer.

And now we have to wait another year to see if Philadelphia can finally put in a bid good enough to host WrestleMania in the near future.

As for Raw, here are some of the main stories heading into another week of build to the Royal Rumble:

The Undertaker makes a Royal announcement

So, we came to learn early in the program that the Raw general manager, Mick Foley, was responsible for advertising The Undertaker being on Raw, despite him being a SmackDown superstar. Stephanie McMahon gave Foley an ultimatum that he had to produce The Phenom by 10:00 EDT. And for Foley, it would have been best for him to do so given that his boss was giving him his performance review.

When it looked like The Dead Man wasn’t going to show up – and even a troll job by McMahon by having the lights go off before her music hit – Foley’s greatest WWE nemesis arrived. The Undertaker came out and said he’s dug 29 holes for 29 souls and he’d be entering the 2017 Royal Rumble match.

I really don’t understand why the creative writing team couldn’t come up with reasoning behind having Undertaker appear on Raw when he’s supposed to be the face of SmackDown as that’s his brand. Why is he appearing on Raw? I posed this question on Twitter Monday night and was met with, “Ratings!” which, of course, matters. I’m sure Raw needed the ratings badly, especially considering it was going up against the NCAA National Championship football game featuring Alabama and Clemson. But, nothing? They can do better. We deserve better.

WWE teased the main event opening the program, but with Braun Strowman continuing to stalk Roman Reigns, that didn’t happen. Instead, Strowman came out and he and Reigns went at it before the match could even start, and Seth Rollins came down for the save. That set up a one-on-one match between Rollins and Strowman, thanks to the Raw commissioner. Rollins and Strowman would eventually fight to a double countout.

In the night’s main event, Reigns defended his United States Championship in a rather-unique match – a 2-on-1 Handicap Match against the WWE Universal Champion, Kevin Owens, and the man who will be high above the ring in a shark cage come his match against Owens at the Royal Rumble, Chris Jericho.

Reigns teased putting Jericho in the shark cage, which was on the entrance stage for some reason, but the cage wound up being thrown onto the floor so that couldn’t happen. Jericho became a first-time ever United States Champion after pinning Reigns.

It wasn’t easy, though. Reigns was hit with a Codebreaker, a powerbomb on the ring apron by Owens which was followed by another Codebreaker that allowed Jericho to get the win.

Rusev interrupted Michaels’ promo, but then he was interrupted by Enzo and Cass. And the promo just went downhill after that.

I said it on Twitter before – Rusev’s made each angle he’s been involved in since losing the United States Championship so good after he’s been inundated with so many bad storylines than anyone I’ve ever seen in recent memory.

It’s been happening for years, and I just never understand it. Bayley is the No. 1 contender for Charlotte Flair’s Raw Women’s Championship, but, yet, she can’t buy a win. In a tag team match on Monday night, Nia Jax destroyed her and Sasha Banks, and wound up pinning Bayley after a running legdrop. How is this supposed to make Bayley look good heading into the Rumble?

The booking is very similar to the way Daniel Bryan was booked three years ago. So, in that, I can see the story of Bayley overcoming the odds and eventually triumphing at WrestleMania. But continually seeing her lose always has the possibility of having the crowd – which is very different from the NXT crowd – just stop caring about Bayley altogether. Can WWE make it until April and have Bayley’s triumph mean as much as Bryan’s did in 2014? Let’s hope so.

Titus O’Neil still wants to join The New Day. Without the Raw Tag Team Championships, I guess this is what New Day has been relegated to. However, they’re still very entertaining and I thought this segment was fine for what it was.

O’Neil continued his campaign to join the group, and if he could carry a keg around the ring and cross the finish line, he’d be in. Sounds easy, right? Well … he pulled a DeSean Jackson.

Gotta keep your eye on the line, man. Kofi Kingston wound up getting the win against O’Neil after hitting him with the Trouble in Paradise.

· Seth Rollins vs. Braun Strowman ended in a double countout.

· Cruiserweight match: Jack Gallagher d. Drew Gulak by pinfall via a running dropkick in the corner.

· Cruiserweight match: Neville d. Lince Dorado by submission via the Rings of Saturn. Neville continued to attack Dorado after the match before Rich Swann came down for the save.

· Sheamus d. Luke Gallows by pinfall via a Brogue Kick. Both Karl Anderson and Cesaro were on commentary during the match.