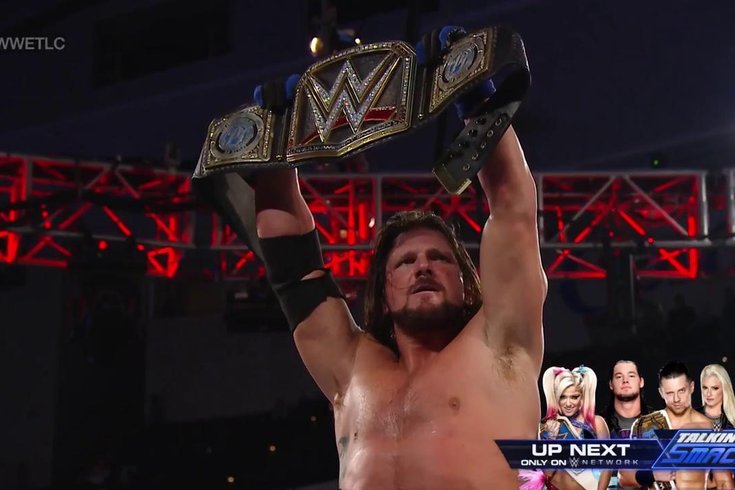 AJ Styles, above, and Dean Ambrose battled in a fantastic main event on Sunday night.

All the championships on the SmackDown brand were on the line Sunday night at the American Airlines Center in Dallas for the annual TLC pay-per-view. New champions were crowned, shocking moments were had and WWE’s blue brand put on another great show. There was little doubt they would, however.

Here’s what went down in Dallas on Sunday night:

Here’s the obligatory multi-man tag team Kickoff Preshow match. American Alpha are becoming the MVPs of this match. They got the win after hitting Grand Amplitude on Simon Gotch. Hey! It’s an Apollo Crews sighting!

This was a rather quick match, and it seemed like it was booked to make both Wyatt and Orton look very strong as the new SmackDown Tag Team Champions. Slater and Rhyno lost in quick fashion after Wyatt mesmerized Rhyno by doing his upside down spider pose, allowing Orton to hit the RKO and pin him.

One would think that Carmella would get the upper hand in this match after Bella cleaned her clock last Tuesday on SmackDown. But that wasn’t the case. Despite a pretty good match, once Bella grabbed a fire extinguisher and sprayed Carmella, it was the beginning of the end for The Princess. Bella hit her with the Rack Attack 2.0 and pinned her to win the match.

After the match, Carmella took the mic and disclosed that Natalya was the one who attacked her from behind before their Survivor Series match against Raw, not herself. Bella looked confused and angry, and later on in the program, Natalya denied the claim, saying Carmella was a liar.

The Miz © vs. Dolph Ziggler

Before the match, Daniel Bryan was interviewed backstage and said he hoped Ziggler would win the match because he’s a better human being than The Miz

And the outcome of this match really began to make me think about the end game with this entire thing.

This match featured some great storytelling as both men locked in on body parts to try and make it harder, if not impossible, for each other to climb the ladder to retrieve the championship. First, Miz locked in the Figure Four with Ziggler’s leg wrapped in the ladder for a crazy-looking spot, and then Ziggler prevented Miz from grabbing the title after pushing the ladder and then hitting him with it while he was hanging by a thread.

Miz dropped and began grabbing his knee and completely sold the injury for the rest of the match.

This match had the unfortunate task of following up one of the better ladder matches seen in recent memory. It didn’t help that even though the ring was littered with steel chairs before the match started, Kalisto went under the ring to try and find more chairs.

It was a fairly entertaining match, if nothing else. Corbin would hit the End of Days onto the steel chairs, despite taking the brunt of it on his own back, getting the win.

Bliss and Lynch have engaged in a really good feud the last month and a half, so this match was bound to be really good.

And it delivered. There were some very good spots, including Lynch locking in the Disarm-Her to Bliss, and then eventually Bliss hitting a DDT on Lynch to the upside-down table on the ring mat.

The match ended when Lynch whiffed on a kick attempt from the apron to Bliss on the outside of the ring and Bliss was able to grab her and powerbomb her through the table, which was set up on the outside already, to become the new SmackDown Women’s Champion.

After the match, Lynch didn’t feel in the mood to talk too much.

"I'm upset with myself ... I let myself down. It don't feel good!" - @BeckyLynchWWE #WWETLC #TablesMatch pic.twitter.com/6rsPmcDK0T

Most of the beginning of this match took place outside the ring. From tables, ladders and chairs to ramps and the ringside barricade, Styles and Ambrose really brutalized each other early and often in this one. In one spot, Ambrose threw the ladder outside of the ring onto Styles. In another, Ambrose suplexed Styles through two steel chairs. Later on, Ambrose flew off a ladder and hit an elbow drop onto a prone Styles, who was lying on the announce table.

That wasn’t it. Later on, Styles was in control as he laid Ambrose on a table outside the ring, went inside the ring and hit a springboard 450 splash onto Ambrose.

A few moments later, James Ellsworth made his way down to the ring, surprisingly to a chorus of boos and not as many cheers as he’s been getting the last few weeks. After hitting Styles with a DDT on the steel ring steps, Ambrose climbed the ladder and looked like he was going to get to the title. Styles recovered and climbed the ladder, but Ambrose staved off Styles and looked primed to recapture the WWE World Championship.

Until… the turn. The heel turn we thought we’d never see!

Ellsworth got in the ring and pushed the ladder, causing Ambrose to crash through the tables on the outside of the ring. This allowed Styles to climb the ladder and grab his title to retain.

After the show, Ellsworth appeared on WWE Network’s “Talking Smack” program and said he had the best strategy in the world by getting rid of Ambrose so he can win the WWE World Championship from Styles since he’s 3-0 against him. He said he’ll give Ambrose the first shot as the title when he wins it. This was all done very well in terms of explaining why Ellsworth did what he did and setting up Ellsworth-Styles for SmackDown on Tuesday. Where do they go from there, though?

Also on “Talking Smack,” The Miz showed up to confront the general manager and the two went back and forth before the show abruptly went off the air. Bryan called Miz a lazy hack in the ring and Miz accused Bryan of taking credit for turning his career around after his first appearance on “Talking Smack.” Will Bryan return to the ring for one more match? Or is this just leading to Miz heading to Raw eventually? Stay tuned.

It was another home run pay-per-view for the SmackDown brand. Really good matches, a couple great matches, a heel turn in the main event and the aftershow on the WWE Network were so well done that it’s hard to believe this is the same company that produces Monday Night Raw each week. Raw has such highs and lows, and SmackDown’s highs have heavily outweighed their lows the last few months.

Stay tuned to PhillyVoice for the Raw roundup on Tuesday morning and the fallout from TLC and SmackDown on Wednesday morning.