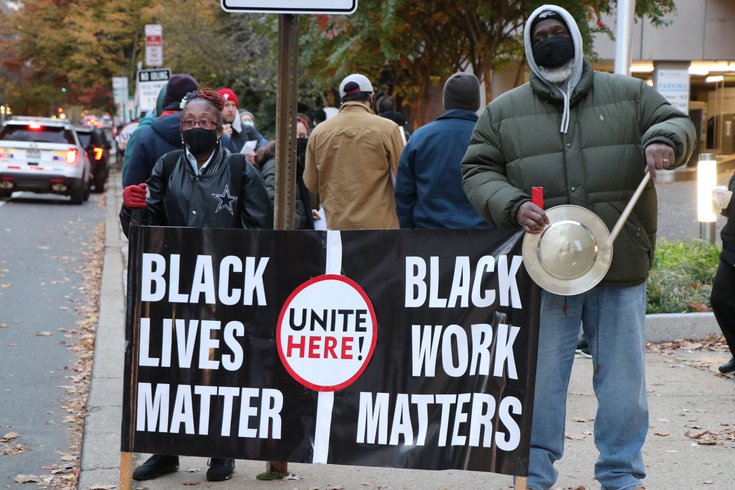 More than a dozen workers at the Wyndham Philadelphia Historic District demonstrated outside the Old City hotel Monday, the eve of contract negotiations between their union and the hotel's owner, RLJ Lodging Trust.

The workers are part of UNITE HERE Local 274, which represents hotel, airport and other food and hospitality workers across the Philadelphia region. They authorized a strike in late October. After two weeks passed without an agreement, they demonstrated outside the hotel, located at 400 Arch St. in Old City.

Negotiations are slated to resume Tuesday.

The union's contract expired in 2019. Union representatives and hotel management continued negotiations throughout the first year of the COVID-19 pandemic, when workers spent the bulk of the year at home amid a lack of hotel visitors.

The union has argued that the Wyndham's reopening and subsequent working conditions have not been in the best interest of the workers. The union is asking for a "worker-led, people-of-color led" recovery from the economic impacts of the pandemic, according to a statement the union released ahead of its strike authorization vote.

The Wyndham hotel workers should be able to determine what the pandemic recovery looks like for them, Local 274 has said. That means improved working conditions, better pay and lighter workloads.

The union has cited a 2019 report, titled "Black Work Matters," that found Philadelphia has gained a hospitality job for every job it has lost in the manufacturing industry. But as of 2019, 73% of hospitality and food service workers in Philadelphia made less than $25,000 per year.

State Sen. Nikil Saval, a Democrat representing Center City and much of South Philly, was among the leaders picketing alongside hotel workers Monday night. When the union voted to strike, Saval had tweeted that he would support the workers "all the way to the picket line."

The hardest hit workers in our city are the hospitality workers, who are majority Black, brown, and immigrant. They deserve a fair contract. They deserve family-sustaining wages. Black work matters. Solidarity with the workers at the Wyndham and everywhere. @UNITEHEREPhilly pic.twitter.com/D7DBR9b5OB

Other allied organizations picketing alongside the Wyndham workers included the Philly Democratic Socialists of America and the Philadelphia Council AFL-CIO.

On the picket line with workers from the Wyndham Hotel - they’re fighting for a contract that includes better pay and fair workloads. @UNITEHEREPhilly pic.twitter.com/2PLJLp2dMT

"Just because workers go on strike or threaten to, it doesn't mean they want to strike," food service worker Monica Burks told PhillyVoice last month. "A strike means going without work and without pay."

The Wyndham hotel management and RLJ Lodging Trust did not immediately respond to requests for comments Tuesday.

Last month, a representative from Wyndham Hotels & Resorts said the Old City location would remain open throughout a strike without impacting guests, adding that the company would continue negotiating until a contract is reached.