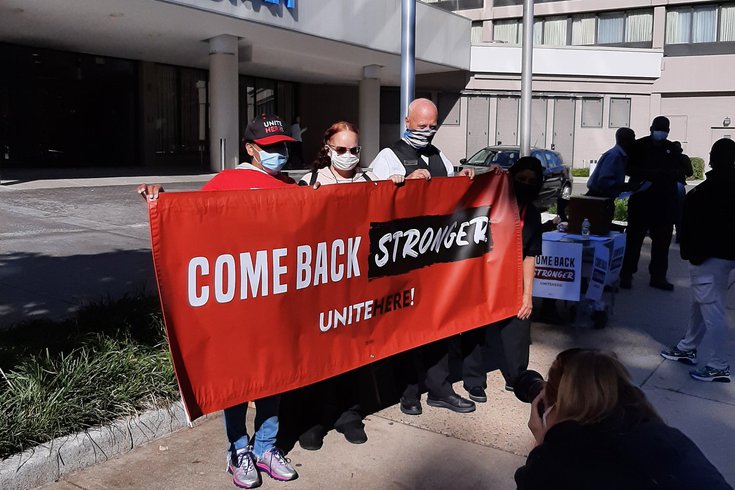 A group of union employees at the Wyndham Philadelphia Historic District hotel unanimously authorized a strike on Thursday. Oct. 29, 2021. The workers, part of UNITE HERE Local 274 have been in negotiations with the hotel chain since 2019. Above, union members hold a sign while standing outside the hotel at 400 Arch St.

"It's our money, and we need it now," employees of the Wyndham Philadelphia Historic District shouted outside the hotel in Old City on Thursday afternoon.

The unionized workers at the Wyndham hotel, represented by Unite Here Local 274, unanimously voted Thursday to authorize a strike. Local 274 represents at least 4,000 food service and hospitality workers throughout Philadelphia's hotels, stadiums, and universities. At the Wyndham, at 400 Arch St., the union represents 31 employees.

The union's contract with the hotel expired in 2019, and union representatives and hotel management continued negotiations throughout the first year of the pandemic, while the workers were still at home.

"They can give a lot more than what they're giving us," said Monica Burks, a restaurant server and bartender who has worked at the hotel for 13 years. "I just want to see a contract, I want a living wage, I want my livelihood to stay intact for me and my family."

If they cannot come to an equitable agreement with Wyndham management, workers could walk off the job in November.

"Just because union members go on strike or threaten to, doesn't mean they want to strike," Burks said. "A strike means going without work and without pay."

A statement released by the labor union on Twitter in advance of the vote said the employee are fighting for a "worker-centered and people of color-led recovery with family-sustaining jobs." The staff claims they weren't paid as essential workers by their employer, and that they should be able to "define what recovery looks like."

"When you have companies that claim they can't give us what we're asking for, as we're still coming back from the pandemic, we just want what's right for us," Burks said. "One job is enough."

Though Wyndham's staff has never gone on strike before, Local 274 previously succeeded in getting other Center City hotels to increase housekeeper pay to $46,000 per year, and reduce workloads to make their jobs safer.

A representative from Wyndham Hotels & Resorts told WHYY that its Old City location would remain open without impacting its guests, regardless of whether the employees strike, and a company said management intends to keep negotiating with the union until a contract agreement is reached..

Local 274 members are basing some of their contract demands on the 2016 Black Work Matters report. The report, which examines Philadelphia's service industry and its treatment of Black, brown, and immigrant workers, has calculated that a living wage for one adult and one child in Philadelphia was $48,651 annually in 2016.

Further, the impact of COVID-19 on hospitality and food service workers has been especially devastating, with more 50 Philadelphia restaurants permanently closing due to the economic impact of the pandemic. Alongside a labor shortage, the affect continues to be felt by nearly every member of the service industry.

From transit workers reaching an agreement to avoid a SEPTA strike early Friday, to Piedmont Airlines flight attendants authorizing a strike earlier this month, worker across the city are continuing to organize and fight for better working conditions and pay.