The original Phillie Phanatic will return next baseball season 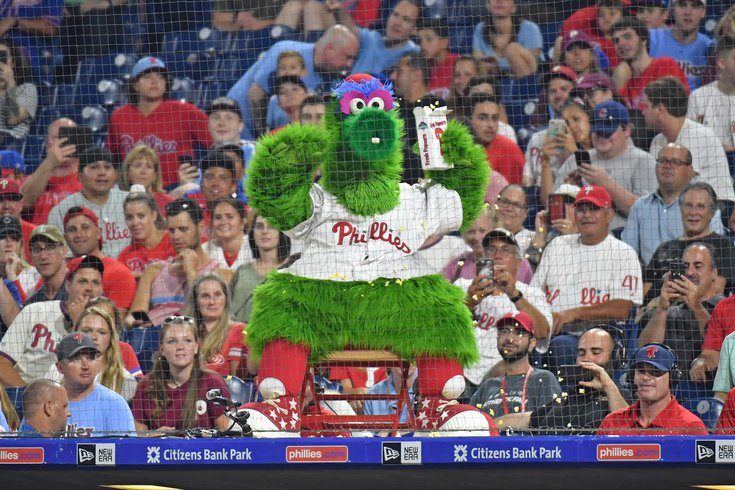 Phillies fans will see the original Phillie Phanatic at Citizens Bank Park for the 2022 season after a legal settlement between the team and the mascot's creators was finalized Monday.

The old Phillie Phanatic hasn't been seen in almost three years, but it will return to Citizens Bank Park when the baseball team opens the 2022 season.

The Phillies are permitted to use the beloved mascot's original design as it so chooses after finalizing a legal settlement with the Phanatic's creators in federal court Monday, bringing a two-year-long copyright dispute to a close.

Both the mascot's prior version and updated design, which the team unveiled in 2020, "are derivative works prepared by the Phillies ... and therefore can continue to be utilized by the Phillies and its licensees whether by reproduction, display, distribution or public performance in any tangible medium of expression," the legal agreement reads.

The deal cites a 1984 renegotiation between the Phillies and the mascot's creators, Wayde Harrison and Bonnie Erickson, which the team has argued transferred the Phanatic's rights "forever."

"The Phillies' and its licensees' rights to continue to utilize those works will not terminate even if one or more of the provisions of the Confidential Settlement Agreement and Assignment are invalidated or terminated," the settlement continues.

The team also paid Harrison and Erickson an undisclosed amount as part of the agreement.

The Phillies put out a statement on social media Tuesday making the return of the original Phanatic mascot official.

“Ever since we created the Phanatic in 1978, Philadelphia has been his home," Harrison and Erickson said in a statement. "We are thrilled to see the original Phanatic back where he should be, in Philadelphia, for the fans of the Phillies.”

The legal battle began in August 2019 when the Phillies filed a lawsuit to keep the Phillie Phanatic as the team's mascot after the New York-based Harrison/Erickson Inc. sent the organization a notice of termination in June 2018.

The notice of termination claimed that Harrison and Erickson created the copyrighted character and had the right to end the contract if both parties did not reach a new agreement by June 2020. Artists are permitted by federal law to renegotiate their rights after 35 years.

The Phillies argued that they permanently owned the mascot's rights and pointed to the team's role in creating the costume, character and personality of the mascot.

A modified Phanatic was unveiled amid the legal dispute. The updated features included new shoes and socks, different shades of green, scales underneath the arms, a new nose, a shortened and reshaped snout, a longer tail and new-looking eyes. The new Phanatic was noticeably lighter in weight too.

But the mascot's creators blasted the team's updated Phanatic, calling the changes "an affront to our intellectual property rights."

A federal magistrate judge in New York ruled in August that the Phillies had a legal right to continue using its updated Phillie Phanatic. U.S. Magistrate Judge Sarah Netburn said the organization's updates to the mascot were enough to protect it under the Copyright Act's Derivative Works Exception, which allows a copyright holder to continue using amended versions even when the rights no longer exist.

The lawsuit was settled in federal court last month. Both sides had 30 days to finalize the deal.

Harrison/Erickson was hired in the 1970s by the Phillies to create the Phanatic, who debuted at Veterans Stadium in 1978. The company is also known for its work with the Muppets.