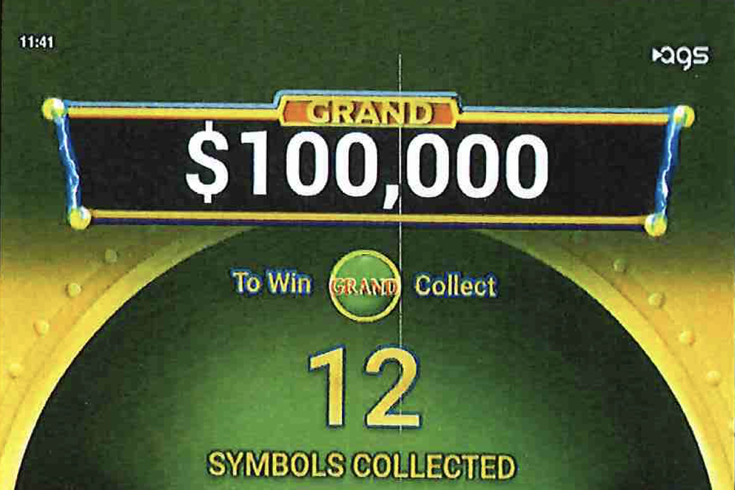 Bucks County resident Lisa Piluso took a screenshot of the $100,000 jackpot that appeared on her phone last year when she was playing the popular online slot game Capital Gains. She has sued the game's manufacturer after the company claimed the jackpot was the result of a technical error.

A Yardley woman and 13 other people have filed a federal lawsuit against the manufacturer of an online slots game that the company claims inflated their winnings in error due to a technical bug.

Lisa Piluso, of Yardley, said she was playing the popular Capital Gains game on her phone in October 2020 when her screen displayed that she had won a $100,000 jackpot. When she attempted to redeem her winnings, the game's manufacturer, Las Vegas-based American Gaming Systems, told her that her winnings had been inflated due to a glitch in the game.

“I’m an experienced online player, and I was shocked when AGS officials, including the company president, told me they weren’t going to pay, even when I showed them the screenshot that I made of the $100,000 jackpot,” Piluso said in a statement issued through attorney Paul D’Amato.

Piluso said AGS first offered her $280, but later increased the payout offer to $1,000 to put the issue to rest.

“They said I actually won about $300, but they then offered me $1,000, saying we were ‘nice people,’” Piluso said. “Can you imagine being told, 'You won, but we’re not required to pay you or anyone else in the same situation?' How many other players have been in the same situation but agreed to settle for a fraction of their winnings after being told they, too, were ‘nice people?’”

Piluso had played the Capital Gains game using an online platform hosted by Caesars Interactive New Jersey. The casino and its online business were not named in the lawsuit filed last week in U.S. District Court in Camden. In the complaint, Piluso claimed that she had initially been told by a Caesars employee that she won the jackpot because she had met the requirement that her whole game board be filled with money balls.

After escalating the matter to AGS, Piluso allegedly got on a phone call with a representative from AGS, who told her that three of her money balls appeared on her screen as a result of an error.

"What are you looking to get from this?" the representative allegedly asked Piluso.

The New Jersey Division of Gaming Enforcement investigated the incident after receiving a complaint from Piluso, who was told that AGS had discovered a bug in the game. The company claimed that the game failed to remove bonus symbols from a player's screen after previous rounds, inflating their earnings. In Lisa's case, AGS said that three of her money balls should never have carried over on her screen.

In the lawsuit, Piluso claims that she was never told how long the bug existed, how many other people received erroneous jackpots and whether state regulators investigated the accuracy of these technical error claims.

The New Jersey Attorney General's office told the Associated Press last week that regulators had fined AGS $1,000 for failing to maintain the integrity of the game's functioning.

Piluso, who runs a seasonal family resort in Wildwood, is seeking compensatory and other damages in the case.

“New Jerseyans were told they could trust this industry and that it would be the financial salvation of Atlantic City, among other chronically financially ailing areas in the state," Piluso's attorney, D'Amato, said in a statement. "The conduct of the defendant toward Ms. Piluso is not only insensitive and reprehensible. It also calls into question the commitment to citizens of the state and other jurisdictions where it operates. Besides suing AGS, we are pressing state regulators for answers, including full disclosure of their investigation into this incident.”