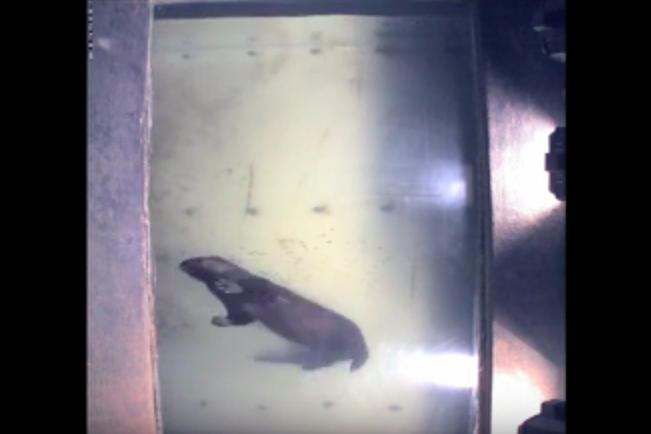 A river otter captured the imaginations of many when it showed up on film at the Fairmount Fish Ladder near Boathouse Row in 2005.

Here’s a fun fact about journalism: Story ideas often arise when you least expect them.

Take this one, for instance. I was walking my dog – the cutest-on-earth Scarlet Overkill – the other day when I looked down and noticed a circular sign on the ground near a sewer grate on my hilltop block.

Pictured below, it urges passersby not to dump things into the sewer as it drains into the Schuylkill River about a half mile to the south. It also featured a cute lil drawing of an otter. 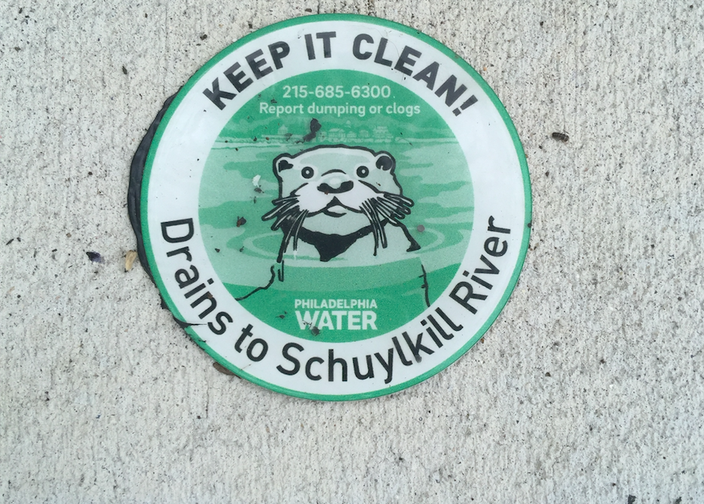 The “river otter” drain marker was part of a Storm Drain Marking Program that celebrates “our city’s seven diverse watersheds.”

Anyway, otters are the best, so I Tweeted about it, asking whether, in fact, otters live in the Schuylkill, because I sure as heck haven’t ever seen one.

The good people at the Philadelphia Water Department soon got back to me with the answer I was looking for: YES! OTTERS HAVE BEEN SEEN IN THE SCHUYLKILL RIVER BEFORE! And they even sent video of one:

It was an otter seen in March 2005 at the Fairmount Dam Fish Ladder located right by the Philadelphia Museum of Art and Boathouse Row. That was, and remains, the seminal moment for otter enthusiasts in the city and region.

In the time since, there have been increased sightings of the North American river otter – aka Lontra Canadensis – in Philadelphia, according to Joe Perillo, a Roxborough native and aquatic biologist in the water department’s Bureau of Laboratory Services.

“The sightings are a bit more common. For me, during the day, I don’t see them much, but fishing at night, I’ve gotten pretty close to them,” he said. “Most have been near the Fairmount Waterworks, below the dam, maybe one or two above the dam. I’ve been hearing a lot more from the Boathouse Row community that they’ve been seeing them as well. I wouldn’t say that they’re common yet, but I wouldn’t call them rare anymore.”

Perillo chalked it up to otter population growth in other areas (i.e. the Delaware River) and an improved Schuylkill ecosystem. As the population grows elsewhere, the otters need space, and since the Schuylkill's quality has improved, the otter sprawl has headed in that direction, he explained.

In a spectrum that ranges from “rare” to “abundant,” Perillo classified the otter population as present, which is below common but above rare. He linked increased sightings to another rarity akin to the fish-ladder video: The tasty-to-otters White Sucker fish in the river.

“The otter popped up and was taking advantage of a late-winter run up the Schuylkill. The river otter came into that like it was a buffet,” he said of the food-chain implications involved. “It’s an easy prey base.”

While Perillo doesn’t have firm estimates of how many “charismatic” river otters could be living along the Schuylkill’s Philadelphia leg, that uncertainty is telling in and of itself.

“Because they used to be more rare, when someone sighted one, we would get an email,” he said. “Now that they’re a little more common, we don’t even get that notification anymore. … As the habitat and water quality improves, we expect the species to improve and grow as well.”