But watch for icy roads and sidewalks later 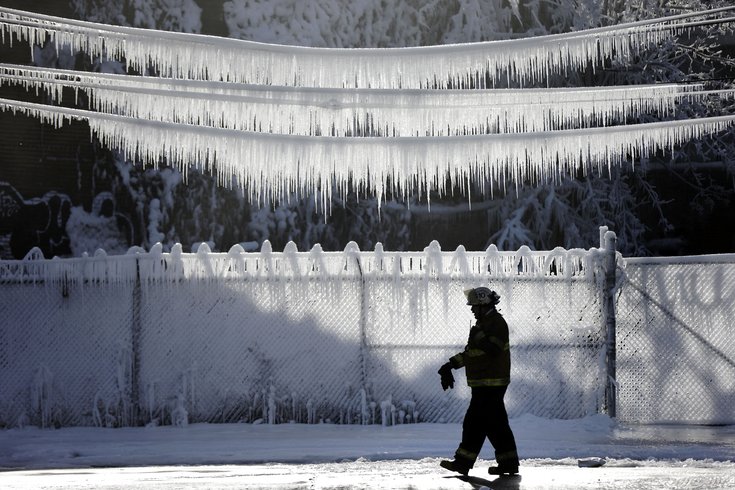 Commuters who faced an ice-covered drive Monday morning may have better luck on their way home.
Warmer temperatures should help melt the icy gloss that enveloped cars and roadways overnight and made for a slippery trip to work. The ice put Philadelphia public and Archdiocesan schools on a 2-hour delay. Dozens of other area schools made a similar decision, most of which were in Chester and Delaware counties and in South Jersey.(See school delays and closings here.)
"The evening commute, it might not be too bad," said Valerie Meola, a meteorologist with the National Weather Service. Temperatures should hit 40 degrees, helping out road conditions.
The problem comes later tonight when the mercury is expected to plummet to the teens. The cold will refreeze some of the melted snow and ice, which could cause slippery conditions first on untreated side roads and sidewalks and possibly on some of the busier routes later on.
"Temperatures look like they will start dropping down below freezing right after the sun goes down," said Meola.
The upcoming forecast calls for warmer temperatures and more rain, possibly heavy at times,  Tuesday into Wednesday. Wednesday's high forecast is for the high-40s, significant snowmelt along with ice movement on waterways will create the potential for flooding in some areas, forecasters said.
Here's the forecast for the beginning of the workweek:
Monday: Cloudy through mid morning, then gradual clearing, with a high near 40. Northwest wind 16 to 20 mph.
Monday Night: Partly cloudy, with a low around 18. West wind 6 to 13 mph.
Tuesday: A chance of snow and sleet before 4 p.m., then snow and sleet likely. Mostly cloudy, with a high near 36. Light and variable wind becoming south 5 to 8 mph in the morning. Chance of precipitation is 60 percent. Little or no snow and sleet accumulation expected.
Tuesday Night: Rain and sleet, becoming all rain after 9pm. Low around 36. Chance of precipitation is 90 percent. New precipitation amounts likely less than an inch.
Wednesday: Rain likely, mainly before 1 p.m. Cloudy, with a high near 48. Chance of precipitation is 70 percent.
Wednesday Night: A chance of rain. Cloudy, with a low around 31. Chance of precipitation is 70 percent.