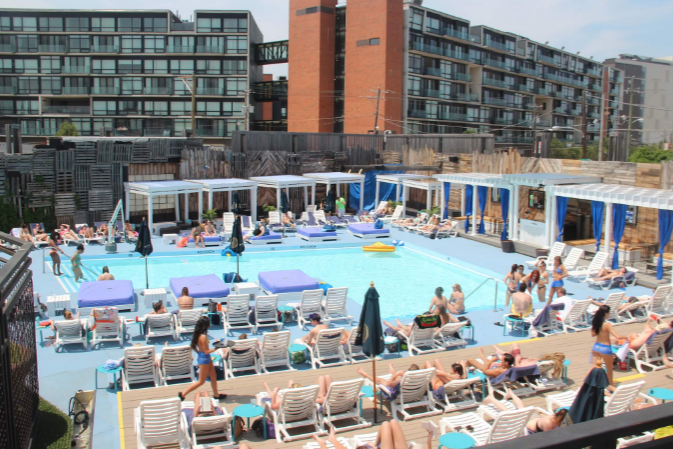 The pool at Monarch Philly in Northern Liberties

There's good news for those of us who are not swimming in cash but still want to take a dip in the adult pool in Northern Liberties.

Formerly known as the North Shore Beach Club, Monarch Philly, located on the east side of The Schmidt's Commons (formerly known as The Piazza), is under new ownership and is making changes to its prices, specifically no longer requiring you to be a seasonal member to get in.

Residents living in the area have heard of this place, but the (previously true) rumor was always that it could be upwards of $700 to swim for the summer, a commitment only a fraction of the working population can reasonably make.

Not anymore. Under new ownership, the North Shore Beach Club is slowly being transformed into Monarch Philly, a still hidden-away amenity in Northern Liberties just steps from the El that its new owners hope will attract young people from across the city to swing by for a day or so without that steep commitment.

As long as you're willing to dish out some dough on food and drinks during your swim, you can come for just the day. More from BillyPenn:

At this point in the summer, anyone can now use the pool for the day, so long as they spend $50 — in both the restaurant and on poolside food and drink — throughout the day.

Seasonal memberships had been discounted from $700 to $500 until early May, according to the pool's website, but are now back to $700. The season runs into September.

Read more about changes made to the pool under new ownership from BillyPenn here.