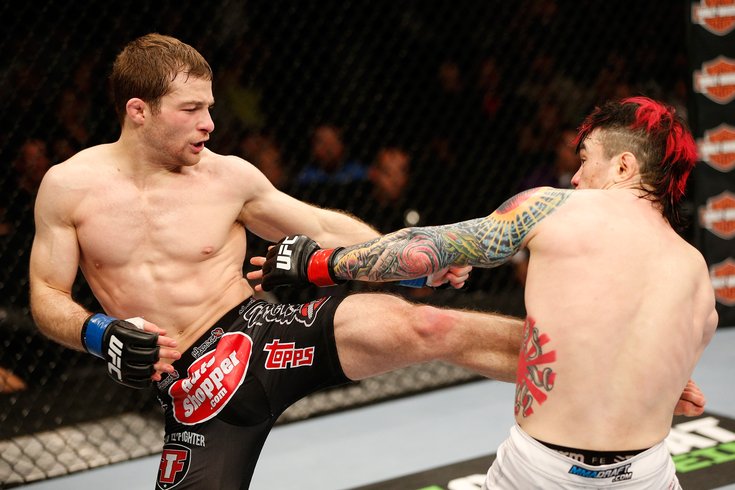 Walking into Sabrina's Cafe on the campus of Drexel University, it was hard to tell that the diminutive man rising to greet me was capable of ending me at a moment's notice. Even though I knew he was a former collegiate wrestler, a black belt in Brazilian jujitsu and a top-10 UFC fighter, Zach Makovsky just didn't look the part.

Smiling almost without pause, the most visible sign of his cut-throat profession came in the form a not-yet-fully-healed black eye that would disappear behind his mug with each sip of coffee. And quite honestly, that only made him look less intimidating.

"I think the winner of this fight, either way, deserves a title shot next. ... A win over Dodson, I think, surely puts me in that No. 1 spot."

Despite the fact that he had graduated from Drexel 10 years earlier, the 32-year-old southpaw looked like every other kid in that restaurant.

Perhaps this is all intentional, a carefully plotted endgame that would make Sun Tzu* proud. After all, a prize fight is, in its most basic form, not that different from a war. Fewer soldiers, sure. And the stakes are considerably less. But in preparation and execution, the core principles remain the same.

From his "Fun Size" nickname to the way he compliments other fighters -- including top-ranked flyweight contender John Dodson, his opponent for Saturday's UFC 187 bout in Las Vegas -- there's something very unassuming about Makovsky. Something so unassuming -- his 5-foot-4, 125-pound frame may be partially responsible for this -- that it's almost hard to believe he's one of the toughest men on the planet, pound-for-pound.

Fresh off a three-round unanimous decision win over Tim Elliot on Valentine's Day, Makovsky (19-5 overall, 3-1 in UFC) is now facing one the greatest challenge of his career: a matchup with the No. 1 contender in UFC's lightest division, flyweight. With a win, the former Bellator bantamweight champion could earn a shot at Demetrious Johnson, the current UFC flyweight champ.

"I think the winner of this fight, either way, deserves a title shot next," Makovsky said while finishing up his breakfast. "They need contenders, and Dodson was the guy who was supposed to get a title shot before he got injured. He was the guy who gave [current champ Demetrious Johnson] his toughest fight. A win over Dodson, I think, surely puts me in that No. 1 spot."

First, however, Makovsky must beat Dodson, who is a big favorite at minus-450 according to Bovada. And although he has no problem talking as if he's already won the fight -- analyzing all possible routes to victory before battle is another one of Sun Tzu's lessons -- he knows it won't be easy.

"I'm expecting a tough fight for sure," Makovsky said of Saturday night's fight, which will air on FOX Sports 1 prior to the PPV main event. "He's not No. 2 in the world for no reason."

The last time Makovsky fought an opponent this highly ranked -- Jussier Formiga, currently the No. 4 flyweight contender, was No. 6  when the two met in August -- was also the last time he lost, and his only loss since joining the UFC in 2013. This time, however, the former Drexel wrestling captain is more familiar* with his foe.

*More from Sun Tzu: "Hence the saying: If you know the enemy and know yourself, you need not fear the result of a hundred battles."

"To be able to represent Philadelphia and the fight tradition of the city, albeit mostly boxing, would be a huge honor for me, very satisfying," Makovsky said, pointing to the black "Joe Frazier's Gym" t-shirt he was wearing.

"I'm actually friends with John and we've trained together several times," he said as a waitress topped off our coffees. "I know how athletic he is, how fast he is, how good he is. You can see he hurts people when he hits them with the left hand. I'm not expecting a one-sided fight by any means.

"But I also feel like I've trained very hard and have a good game plan of things I can do. Different things, depending on how the fight is going."

It's almost hard to believe, based on the number of similarities between his preparations and the lessons of Sun Tzu, that Makovsky has never read The Art of War. He admitted that he owns the book, but has never gotten around to reading it, although he plans to some day.

And perhaps for the Bethlehem, Pa. native, it would be a waste of time. It's eerie how he accurately he summarizes the Chinese general and philosopher without having ever studied his teachings. He seems to have been born with those lessons already hardwired into his programming.

Take a look back at the last quote from Makovsky:

"But I also feel like I've trained very hard and have a good game plan of things I can do. Different things, depending on how the fight is going."

The second half of his statement, the part about adjusting his tactics on the fly based on his opponent and the effectiveness of his initial strategy, is a nothing more than a succinct version of one of Sun Tzu's most beautiful passages:

Military tactics are like unto water; for water in its natural course runs away from high places and hastens downwards.

So in war, the way is to avoid what is strong and to strike at what is weak.

Water shapes its course according to the nature of the ground over which it flows; the soldier works out his victory in relation to the foe whom he is facing.

Therefore, just as water retains no constant shape, so in warfare there are no constant conditions.

He who can modify his tactics in relation to his opponent and thereby succeed in winning, may be called a heaven-born captain.

For all the time Makovsky has spent preparing, he cannot be stubborn in his tactics. He must be willing to throw out what is not working and, if necessary, completely shift the focus of his attack.

It's because he's a warrior, and he knows that. Most fighters are. The great ones, however, are more than just foot soldiers. They're the generals; the ones who must careful plan and then decide, in the heat of battle, whether to push forward or retreat, hoping a change in strategy will yield more favorable results in the next round.

If each fight is a simply another battle for Makovsky, as he marches on toward accomplishing his ultimate goal of being a UFC champion, then the spoils of victory are nearly within his grasp.

After Dodson, the next step in his plan to overthrow the champ -- one that, like his strategy in the octagon, has evolved over time -- would be a shot at Johnson's flyweight title.

"I'd be thinking this is the last step to my ultimate goal," Makovsky said of potentially getting a title shot, grinning at sheer possibility of finding himself in that situation. "That's the goal of anyone in the UFC. I've continued to raise the bar for my goals as I go. My original goal was to just make enough money to be a full-time mixed martial artist. Then I wanted to be as successful as possible; to win a couple of titles. Then I wanted to get to UFC.

"I've kind of fulfilled every one so far, and I feel like the belt is the top of the pyramid."

Should Makovsky, who added that his dream of winning a UFC title only became a truly realistic goal when he beat Joshua Sampo just over a year ago, ascend to the top of the pyramid to become that "heaven-born captain" of which Sun Tzu wrote, he'll be the first fighter out of Philly to do so.

"To be able to represent Philadelphia and the fight tradition of the city, albeit mostly boxing, would be a huge honor for me, very satisfying," Makovsky said, pointing to the black "Joe Frazier's Gym" t-shirt he was wearing. "I'd be just happy to represent the city where I've done most of my training and have lived* for the last 14 years."

*Makovsky is originally from Bethlehem, but has lived and trained in Philly for 14 years since first moving to the city to attend Drexel.

It's the city he now calls home. The one that taught him the definition of hard work. The one that will be announced when he enters the octagon on Saturday night.

That's why his decision to meet at Sabrina's Cafe is so important. Not just because it's right next to the Drexel dorms in which Makovsky used to watch VHS tapes of MMA fights while he and his roommate ate Chinese food; or because it highlights his continued ties to the university, where he still works out and trains with the wrestling team.

There's also something very "Philly" at the heart of that decision.

Sabrina's is not a big chain with locations all over the country, which makes it uniquely Philly. It's also not Pat's or Geno's, which are unique to this city but have become more touristy than anything else. It's somewhere right between the two; a prize to those that have been there, but relatively unknown to those outside the city.

The "where" in this instance reveals more about the "who." It's further proof of the unassuming way in which Makovsky operates, flying under radar until it's staring you right in the face and can no longer be hidden or ignored.

It's not just the art of war. It's Philly.