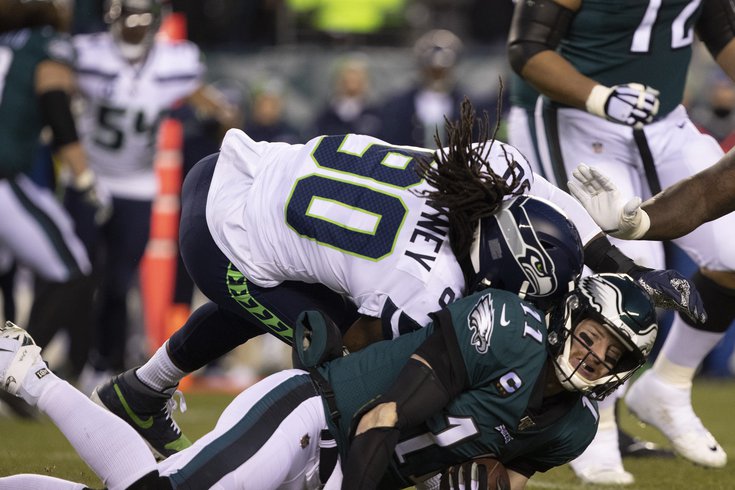 "Maybe don't let your head get in the way of a defender attempting to damage your brain, you idiot." - The NFL, explaining to Carson Wentz their decision not to fine Jadeveon Clowney, probably

This week, all week long, we've been taking a 100 percent vitriolic look at each of the teams in the NFC East, in detail, while ignoring the positives. The first target on Monday was the Cowboys. On Tuesday, we roasted the Giants. On Wednesday, we poked fun at the Washington team. On Thursday, we took some quick shots at the rest of the NFC.

Today we'll finish off the series with the Philadelphia Eagles.

In 2019, Wentz started all 16 games, and it seemed like he put to bed some concerns about his durability. And then in the playoffs, as you all saw, a cheapshot by Jadeveon Clowney sent him to the locker room, and yada yada yada, the Eagles' season was over.

While it's tough to fault Wentz for his head getting in the way of a deliberate helmet to helmet shot, the reality remains that Wentz has been unable to finish each of the last three seasons, and his injury history continues to grow:

If Wentz didn't have the above injury history, do the Eagles select Jalen Hurts in the second round of the 2020 draft? I mean, sure, they want to be a quarterback factory...

...but they probably don't take him, right?

The Eagles will be missing at least two (and maybe three) of their top six offensive linemen from a year ago:

There's a chance that the Eagles will bring Jason Peters back, which would be a clear indication that the team is down on Andre Dillard, their first round pick in 2019. Dillard struggled mightily as a rookie, as you can see in the following Twitter thread:

This offseason, we're looking at a handful of Eagles players who are either new, or are already with the team, but we perhaps don't know a lot about them just yet due to limited action. Here we'll cover LT Andre Dillard. 🔥 (Thread and article) https://t.co/RDQwGkTirj

Or if you don't have time for all that, you can just watch this gif on a loop. It's basically the same thing:

At RG, Brandon Brooks is done for the season with an Achilles tear, and the first guy likely to get a shot as his starting replacement is third-year pro Matt Pryor, who is big and powerful, but can't hold a candle to Brooks' athleticism.

And then Vaitai was quietly a super-useful player for the Eagles over the span of four years, filling in at LT, RT, and RG at various points, even starting at LT down the stretch in the Eagles' 2017 Super Bowl season.

For all of the Eagles' issues over the last two seasons, the one thing that fans never had to worry about heading into a matchup was the offensive line. It was always an advantage. Now? 😬.

3) The leader of the defense is gone

Staying on the non-returning players theme, the team released Malcolm Jenkins, who then signed with the Saints.

Jenkins was unquestionably the leader of the defense, and was the team's most durable player in the six years he played in Philly.

On a team that has suffered an absurd number of injuries the last three seasons, Jenkins was the lone constant in the Eagles' defense. His value to the team could not have been clearer in 2018, when his leadership and presence kept the Eagles' secondary from completely crumbling after it had lost Jalen Mills, Ronald Darby, Rodney McLeod, Sidney Jones, and others.

At one point during his Eagles tenure, I believe there was a case that Jenkins was a borderline top 5 kind of safety in the NFL. While he's not that anymore (he's now 32), Jenkins is still a very good starting safety who still makes plays. For example, he had eight forced fumbles (one didn't count) the last two seasons, and he became a significant threat as a blitzer down the stretch in 2019. He also had a blocked field goal against the Lions that should have led to a win, but ultimately didn't. And of course, his intangibles are sort of impossible to measure.

He'll be replaced by Jalen Mills, a corner converting to safety. It's hard to imagine how that won't be a downgrade.

4) Alshon Jeffery has the worst contract in the NFC East

Eh, maybe second-worst after Nate Solder. At any rate, it's really bad.

Just before the start of the 2019 season, the Eagles made the error of guaranteeing Jeffery’s 2020 salary in exchange for a small pay cut. It was a puzzling move at the time, and it turned out to be disastrous, as Jeffery proceeded to have the “bad year trifecta.”

A release of Jeffery would come with a $26 million dead money charge. A trade of Jeffery would knock about $10 million off of that, but it's unlikely that any team is trading for a slow, aging, injured, quarterback-criticizing receiver who might also not even be ready for the 2020 season. The Eagles' best hope is that Jeffery will fail a PED test and his guaranteed money will get voided.

There's a strong argument to be made that in two of Wentz's first four seasons in the NFL, he had the worst wide receiver situation in the NFL. While the team did draft three speed receivers and traded some blocking sleds for Marquise Goodwin, they did not add more of a sure thing during free agency. It's not out of the question that Eagles could have the worst wide receiving corps in the league yet again.

Yes, DeSean Jackson is returning and maybe he'll play more than three games this year, and yes, the team drafted Jalen Reagor in the first round, and maybe he won't be affected by this COVID-shortened offseason. Those maybes aside, I don't think J.J. Arcega-Whiteside and Greg Ward are keeping defensive coordinators up at night.

6) The corners are better, buuuuut...

The Eagles' secondary was awful in 2019, as they gave up the most plays of 40+ yards in the NFL, shown here:

Their biggest offseason move was their trade for Darius Slay, who is the best cover corner they've had since Asante Samuel. He'll no doubt help stop the bleeding shown above. Buuuuut, there is the issue of his atrocious tackling efforts in Detroit. A small sampling:

The Lions made it clear they weren't going to pay Slay, and Slay clearly didn't want to play for Matt Patricia anyway, so maybe his effort tackling will be better in Philly. If it's not, and if he's not making big plays so that people won't care about tackling, fans will notice.

Opposite Slay will likely be the 5'9, 183-pound Avonte Maddox.

Local guys/gals: I know you guys know, or we at least think we might know.

When the new collective bargaining agreement was reached, there weren't more than a handful of teams around the league happier about it than the Eagles, who could confidently rely on a substantial salary cap rise to offset their high 2021 cap number. However, because it's not exactly easy for NFL front offices to predict a global pandemic (and the United States government's embarrassment in their handling of said pandemic), the cap is unlikely to rise much, if at all, next offseason.

As such, the Eagles are going to have to roll over as much of their remaining 2020 cap space as possible, which means that there won't be any big-name, big-money players walking through the door the rest of this offseason. No Clowney. Jamal Adams. No Yannick Ngakoue. Forget it.

If you see a headline that reads, "Should the Eagles sign / trade for (fill in some big-money player)," the answer is, "No, they can't." You should still click if we publish any such article, though. As sportswriters, our yachts don't pay for themselves.

9) They'll have a first-place schedule

As the NFC East champs a year ago, the Eagles have to face the NFC North and NFC South champs. Those two teams are the Packers and Saints, who both went 13-3 in 2019. Here's who the NFC East teams have to face in those two floating games:

The last time a team repeated as NFC East division winners was when the Eagles did it in 2004. In each of the last 15 seasons, we've seen the previous year's division champion dethroned.