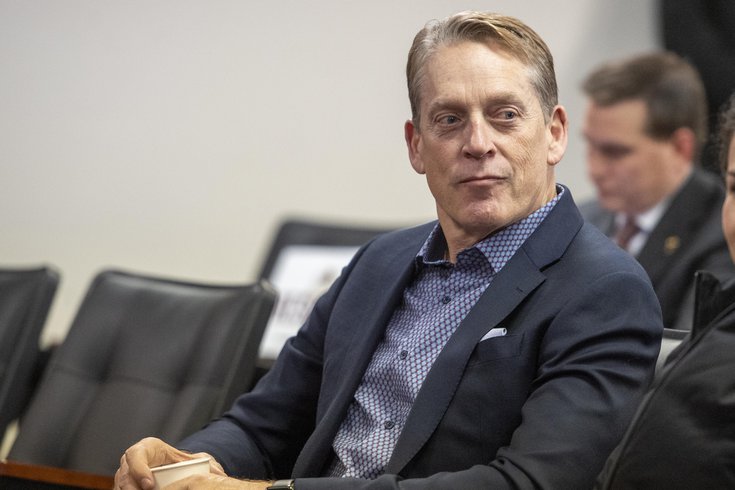 Jack Del Rio reflects on his interview with Dan Snyder, assured that his "all lives matter" comment clinched a job offer.

This week, all week long, we're taking a negative look at each of the teams in the NFC East, in detail. On Monday, our first target was the perpetually over-hyped Dallas Cowboys. On Tuesday, we looked at the loser New York Giants. Today, we'll roast the Washington team.

To note, we will not be talking about the positives of any of the Eagles' NFC East rivals, because, well, that's no fun. This will be 100 percent vitriolic. And yes, we'll torch the Eagles as well at the end of the series.

1) Who cares about this team outside of DMV?

Good Lord this team is difficult to write about in a slanderous way, because, I mean, we all already know they're bad. At the end of the 2019 season, folks who cover the NFL were seemingly all trying to find their own clever way of saying how crappy the NFC East as a whole was, and rightfully so, seeing as it was by far the worst division in football.

Washington was the doormat of the putrid NFC East, going 0-6 against the Eagles, Cowboys, and Giants. In fact, the only teams Washington beat in 2019 were the Dolphins, who were the only team in the NFL with a worse point differential than them, the Jeff Driskel-led Lions, and the Kyle Allen-led Panthers.

So, they're really, really, really, really bad. I know it. You know it. We all know it. There's no new ground being covered here. Like, when the schedules came out and fans were trying to figure out their teams' records for the season, I'm sure that even Giants fans and their trash team were chalking up a sweep over Washington.

Anyway, they're not just bad, they're boring, and their roster is littered with Mitchell Friedmans.

I feel like that's what most casual football fans would do if they were to look at Washington's roster.

2) The defensive coordinator is dumb

I don't say that lightly, or in the context of football, like "He should have gone for it on 4th and 1" or something like that. Jack Del Rio, Washington's defensive coordinator and champion of nonsense motivational tactics gone wrong, is that guy from high school that you haven't seen in 20 years that posts Nancy Pelosi memes all day on Facebook.

On Tuesday night (just in time for this dumpster fire submission -- thanks Jack!), Del Rio took to Twitter, and as Dan Steinberg of the Washington Post notes below, had himself a night.

Redskins DC is having a night pic.twitter.com/0WWCNpigzM

First, Del Rio's AOC tweet was in response to this obviously fake Photoshop (and if it isn't obvious to some, maybe take literally 10 seconds to google its authenticity): 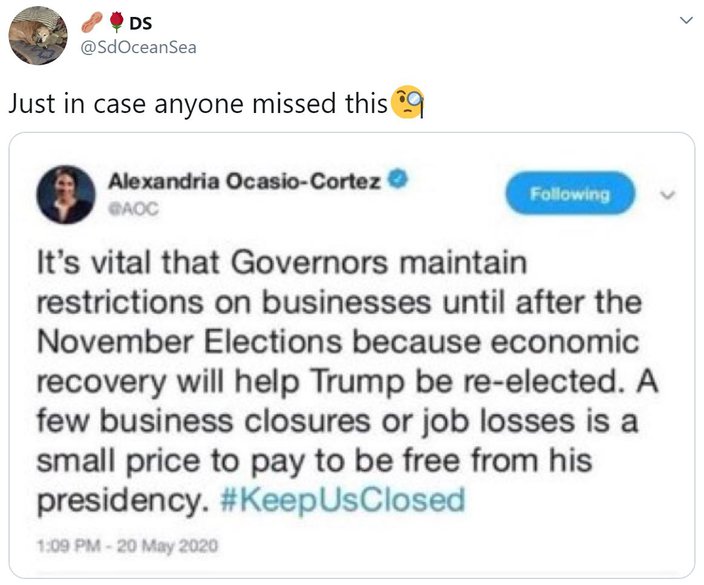 Regardless of your political views, falling for that is the equivalent of fake throwing a tennis ball to your dog.

As of this publish date/time, Del Rio still hasn't deleted the tweet, despite like 90 percent of the replies either laughing at him or informing him it's fake.

Much worse, Del Rio seems to be buying into a notion that NASCAR driver Bubba Wallace, who went through a lot of bullshit this week, faked a hate crime. I can't imagine that will go over well with any of his players, black or white.

I'm an unathletic 43-year-old dork sitting behind a keyboard, but if I were Chase Young, I would not want to play for that dope.

In his rookie season, Haskins completed 58.6 percent of his passes, with 7 TDs and 7 INTs, for QB rating of 76.1. Those numbers are on par with other quarterbacks who have had underwhelming rookie seasons. He can still be good. Eh. Maybe. We'll see. But the stat that really jumps out when looking at his first year is sacks.

In 9 games last season (7 starts), Haskins took 29 sacks. He was sacked on 12.5 percent of his dropbacks, according to pro-football-reference.com. Granted, Washington had a bad offensive line in 2019, however, that is the second-highest sack percentage for any quarterback attempting at least 200 passes in a single season in the last decade. Note the only player with a higher sack percentage, lol.

As you can see, there are a lot of mobile quarterbacks on that list, and you're willing to live with a few extra sacks here and there if your quarterback can extend plays with his feet. However, running with the football is not a strength of Haskins'. Taking extra sacks is common for rookies, but when you're taking sacks with that level of frequency and you're not known for making plays with your feet, your processing and quick decision making is going to have to improve considerably.

4) Speaking of that bad OL, who is going to be the LT?

The asinine pissing match that Bruce Allen engaged in with Trent Williams is finally over, as Washington finally traded Williams to the 49ers, receiving fifth- and third-round picks, in 2020 and 2021, respectively, in return.

Signing some veteran tackle like Jason Peters to legit money would be pointless and stupid, so I'm with them in letting a younger guy win this job, if that's indeed the plan, but LT is likely to be an ugly spot for Washington in 2020.

On talent alone, rookie Saahdiq Charles probably would have been a Day 2 pick, but character concerns dropped him to Day 3. He missed six games for LSU in 2019 for disciplinary reasons, and several teams reportedly didn't have him on their draft boards as a result.

Charles has good athleticism, but his length is concerning for a tackle. He's only 6'4, with 33" arms, which puts him in the ninth percentile at each measurement. Washington may also view him as a guard.

If they think he's a tackle (or will at least allow him to work there to begin with), Charles will likely compete with free agent acquisition Cornelius Lucas and 2018 third-round pick Geron Christian. Watch your back, Dwayne.

As for the rest of the projected starters along the offensive line:

• RT Morgan Moses: Formerly one of the better RTs in the league, but his play has fallen off.

In recent years, OL injuries have killed this team. To be determined if they can stay healthy in 2020.

Guise entered the NFL as an ultra-talented back out of LSU, who fell in the 2018 NFL Draft because of character concerns. At 59th overall, many thought of him as a steal. Through his first two seasons in the league, Guice has just 42 career carries, due to a string of serious knee injuries:

• December 8, 2019: He returned from IR, had one huge game against the Panthers, and then suffered a sprained MCL in his left knee against the Packers, ending his season.

He feels like one of those guys who has played juuuuust enough to show those little glimpses to get fans excited, but more often than not leave frustration in their wake because they're rarely available. I mean, look at the stiff arm on the run at the 1:38 mark here:

Fans go, "Oh man, we got a faster Marshawn Lynch," and then a week later he's on IR. Guice is taking the "perpetual tease" torch from Jordan Reed and Chris Thompson.

It's Jeremy Sprinkle! Who's Jeremy Sprinkle? He's best known for stealing some shirts and multiple wallets (lol) from Belk department stores the week of the Belk Bowl when he was at Arkansas. I'm not making that up. Meh. Whatever. I did worse in college, I'm sure.

I knew that Washington signed Ronald Darby this offseason. I did not know that he is a projected starter. When opposing quarterbacks targeted Darby last season, they completed 64.2% of the passes, for 705 yards on 10.5 yards per target, with 6 TDs, 2 INTs, and a QB rating of 116.8, per pro-football-reference.com.

However, what I'll remember most about Darby's play in his time with the Eagles wasn't his coverage. It was his abysmal tackling. Pro-football-reference.com has him down for a 14.9% missed tackle rate over the last two seasons combined. That sounds about right.

Starting opposite Darby will likely be Fabian Moreau, who got better as the season progressed in 2019, but had his share of ugly moments along the way, like this:

Fabian Moreau is still looking around for Stefon Diggs 😂pic.twitter.com/gfXvKsmuh3

PSA to defensive coordinators around the league -- See Terry McLaurin to the right? That's what he looks like. He's number 17. He's waving to you. Make sure your secondary covers that guy. He's literally the only thing this team has on offense.

There are 19 other wide receivers or tight ends on the roster, who have combined for a grand total of 3,798 career receiving yards, led by... drumroll... Richard Rodgers, lol.

"Richard Rodgers, Cam Sims... I never even heard of these guys. Hale Hentges?"

One of the silliest things that coaches who are new to a team do is sign a guy who knows their system, who will show the young bucks, (in football guy voice), "how things are done" on the field and in the locker room.

• For the Eagles, that guy was Chase Daniel, or take your pick of any of the 30 former Jim Schwartz players they have signed over the last five years.

• For the Giants, it was Jonathan Stewart when Dave Gettleman arrived, and now Dion Lewis and Nate Ebner with Joe Judge's arrival.

• In the Cowboys' case, Randall Cobb was like, "I'm not playing for that guy again," and he left to go play for someone else. So maybe they don't apply here.

For Washington, that guy is Ron Rivera fave Thomas Davis, a 37-year-old linebacker who is going to count for $3.75 million on a the cap, and take snaps away from a younger linebacker who could be developing in the system in a year that the team isn't going to compete for a Super Bowl in their wildest dreams anyway. Ditto that for 29-year-old Jon Bostic, who shouldn't be on the team either.

10) And as always, our yearly check to make sure Dan Snyder is still the owner