What they're saying: The Eagles are desperate for a playmaking receiver, bargain bin RB options and more 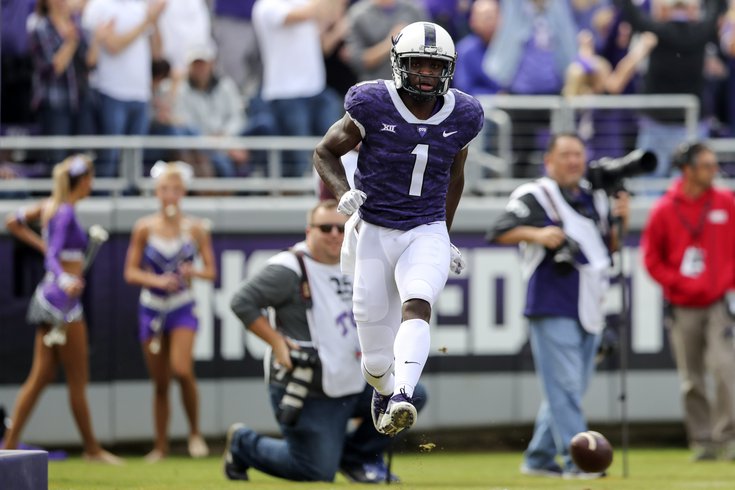 In an alternate universe, one absent the pandemic that has taken nearly 120,000 lives and decimated pro sports schedules, the NFL would be finishing up mandatory minicamps right now. Players and coaches would be preparing to "go dark" for about a month before training camps open in late July and sportswriters would be preparing to take their final vacation before training camp and the NFL Season begin a marathon for six months.

Instead, of course, nothing but speculation (and apparently sucker punches) exists for sportswriters right now.

So while we patiently sit and wait, hoping that a month from now we have a guarantee that training camps will proceed as planned, let's take a look at what the experts have been saying about the Eagles, with topics ranging from the team's Mount Rushmore, to free agent fits to a few storylines to keep an eye on as the season approaches:

We'll start with the first of two Athletic pieces, as Berman closes his eyes and thinks of football. The Eagles beat writer documented 50 things he wishes he could see in minicamps, 25 on offense and 25 on defense. We'll focus in on a few thoughts he had about the wide receiver position, specifically first round pick Jalen Reager — a player for whom no minicamps is certainly a huge detriment for:

9. There’s considerable anticipation to see Jalen Reagor after the Eagles drafted him with the No. 21 pick over Justin Jefferson, and the spring would have been a chance for Reagor to reveal how he can become a dynamic player in the offense. A major post-draft talking point with Reagor was that his combine performance (4.47-second 40-yard dash) did not show his true speed. If that’s the case, his speed would be apparent in minicamp. After dropping eight passes in 2019, Reagor also must show that focus drops won’t be an issue in the NFL.

10. Reagor won’t just be worth watching on offense. He’s likely going to be the first one up on punt returns. The Eagles are looking for a Darren Sproles replacement and had little production on punt returns after Sproles’ injury. Reagor, who twice scored on punts at TCU last year and averaged 20.8 yards per return, will help in this area. Pederson mentioned the rookie’s also a possibility on kickoff returns. Reagor returned only 13 kickoffs at TCU, but the Eagles would have seen him in action with their kickoff return unit this spring. [The Athletic]

We'll jump from a local writer to a national one, as "from the GM's eye" takes a look at one obvious and one not obvious question for all 32 NFL franchises. It comes as no surprise that in this football crazy town, Lombardi's "non obvious" query is actually not as inside football as he probably hoped. Eagles fans know full well each of the following are concerns and storylines worth focusing on as the season approaches:

OBVIOUS: Can the Eagles develop another reliable receiver that Carson Wentz will throw the ball to?

The two leading receivers on the Eagles were tight ends, Zach Ertz and Dallas Goedert. And the third best was running back Miles Sanders, which was why Wentz averaged a paltry 6.6 yards per attempt. The Birds need DeSean Jackson and Alshon Jeffery to stay healthy, but both are over 30 years old and have been plagued by the injury bug.

NON-OBVIOUS: Who will be the starting Mike Linebacker?

The Eagles chose not to draft middle linebacker Patrick Queen or Kenneth Murray with their pick in the first round of the 2020 draft and now have many questions about who can become their starting Mike. This is a crucial position for the Birds defense and one that won’t be solved until after training camp. [The Athletic]

Lombardi doesn't mention Reager in his "obvious" section, but it's no secret that there is a whole lot riding on the Birds top draft choice showing he was a worthy selection this season.

While on the subject of Eagles new wide receivers, a sleeper pick to make a big impact this coming season appears to be late round pick John Hightower, who is one of the trio of speedy wideouts the team drafted (in addition to Marquise Goodwin, who they traded for on draft day). With an offense that felt stale and in neutral often times last year, the Eagles definitely have a slew of weapons they can be creative with. And that's exactly what Frank expects head coach Doug Pederson to do with Hightower.

The Eagles think speedy rookie receiver John Hightower has a shot to develop into a player, and one impressive thing about the fifth-rounder from Boise State is his rushing number. Hightower only had 24 carries in college but averaged a ridiculous 13.2 yards with two TDs. That’s the fourth-highest rushing average in the BCS on more than 20 carries going back to 2000, which is as far back as Sports Reference tracks college stats. So even if he’s not getting a lot of playing time as a receiver, if he can get himself on the game-day roster watch out for Hightower on jet sweeps and reverses. [NBCSP]

The Eagles still have several free agent needs, and running back is at the top of the list. The biggest problem is, with uncertainty ahead regarding the salary cap for 2021, Philly needs to be very careful this season. With cap space to spare but a deficit expected next year, the Birds were hoping to roll over some of their space to help balance things in the year ahead. If the cap plummets due to lower revenues in 2020 (due to the virus and no fans in stadiums), they could find themselves in salary cap hell pretty soon. Which is why, with regard to adding pieces for 2020, they need some cheap signings. Kaye, the Eagles beat writer for NJ.com took a look at six possible RB options that could be found in the bargain bin.

We won't ruin his hard work and reveal the entire list here, but we will give you a snippet of his No. 1 option, a player who remains unsigned and is a perfect fit to split carries with Miles Sanders in the backfield.

Crowell is a forgotten name on the free-agent market. After a forgettable 2018 campaign with the Jets, Crowell signed with the Oakland Raiders and tore his Achilles tendon just a month after joining the squad. He missed all of last year while recovering from the injury, but is now roughly 13 months removed from surgery.

Prior to his injury, Crowell was seen as a solid rotational back, who could pick up chunks of yardage with his hard-nosed style. After a year on the shelf, Crowell is likely waiting to undergo workouts and physicals with teams before he signs a free-agent deal. His style would serve as a strong complement toward Sanders, Scott and Clement.

While he isn’t known for his receiving ability, Crowell has caught 117 career passes in the NFL. He also has a background with the Shanahan offense from his time in Cleveland. Eagles senior offensive assistant Rich Scangarello is expected to bring Shanahan play-calling principles to the Philadelphia offense, so Crowell could be an asset in that regard as well. Crowell would get the opportunity for a bounce-back season behind Sanders, while the Eagles would get an experienced veteran, who -- if healthy -- could fill the Jordan Howard void in the backfield. [NJ.com]

And now to a website not often cited for sports coverage, Fox News (yes, Fox News not Fox Sports), which for whatever reason decided to build Mount Rushmores with the four best players for each sports franchise. Their Fab Four for the Eagles is a solid list, one that contains three defensive players and two old timers. We decided to give credit for them acknowledging Steve Van Buren as one of the four best Eagles of all time.

Steve Van Buren, a two-time NFL champion with the Eagles, was one of the best running backs in franchise history. Van Buren was recognized as a seven-time All-Pro, which included six first-team selections. He played with the Eagles from 1944 to 1951.

Van Buren led the NFL in rushing yards and rushing touchdowns four times each. He was also a part of the 1940s All-Decade Team, as well as the 75th and 100th Anniversary All-Time Teams.

You can see the rest of their list here.