10 worst people to be around on a train, subway or trolley

This story is about the latter contingent, whether they be riding subways, Regional Rail lines, Amtrak or its hoity-toity Acela cars.

This definitive list of the Ten Worst Types of Train Passengers was compiled in a highly scientific manner.

We polled a select group of subway riders, SEPTA’s Regional Rail commuters and train-workin’ folks who make their living ensuring that – in a best-case scenario – people safely, comfortably do so.

Some entries describe a very specific type of human who makes train rides uncomfortable for those around him or her. Others are an umbrella description of overarching offenses.

Think we missed anybody that drives you bat-poop loco?

10) Those who publicly relieve themselves and perverts in general. Said one poll respondent, “I get on the PATCO at the Ferry Avenue station and, on two separate occasions, have seen human poop on the platform.” Egads. Since it’s on the platform, it totally came from a passenger-to-be. Woe be the person who sat next to said offender. This complainant extended his list of grievances to train stations that “always smell like piss.” (Many do).

9) Kids. This extends beyond that “group of young children seen on two videos using foul language and throwing punches at passengers on SEPTA's Market-Frankford Line” last March. While one respondent singled out “teenagers” in general, that seems unfair in a blanket-statement sense. Unattended children in general can prove to be nuisances, as can the “high school kids who get out at each stop and sprint to see how many cars they they can pass to hop back on before the doors close. They're sweaty and giggling and smell like s***.”

8) Fare etiquette violators. Those who jump the turnstiles might be the scourge of train-police folks.

For passengers, though, it's “people who do not have their $2.50 ready-in-hand at the turnstile for the conductor risk making the person behind them miss their train.” One respondent had a crystal-clear message for them: “You are an a*****e.”

7) Olfactory offenders. We’re talking ‘bout people who take their shoes off, pick their noses or seatmates who reek of “heavy odors” like too much cologne, perfume or cigarette smoke.

6) Eaters. Some of those singled out include:

“That person who thinks bringing McDonald’s (or other crappy fast food) onto the train to eat and stink up the train car is OK.”

“People who eat hot food on the train. A candy bar is one thing. Styrofoam wiggling around on your lap is another.”

“People who eat Halal or other pungent foods.”

5) Stop. Talking. To. Me. “People who look to start a conversation with you despite you making efforts to zone out (headphones, book, scrolling through your phone).”

4) Space Invaders. There’s a plethora of open seats nearby. Full rows, even. But you’re gonna go and sit right next to me? Nah. Ain’t having it. Find another seat, bruh. You’re the fourth worst.

3) Bumrushers. It’s common courtesy to wait for people to get off the train before boarding. Yet some people are so impatient that they push their way through the crowd to get on when they want to. Shame! Shame! 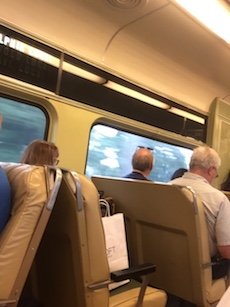 An example of someone using a seat for a bag instead of letting another passenger sit down.

2) Space Hogs. Yes, “manspreading” has gotten quite a bit of pushback in recent years, but manspreaders are far from the only space hogs who draw the ire of fellow passengers.

Nope. Not by a long shot.

Joining those offenders are, in no particular order of annoyance:

“The guy pretending to be asleep so they can take up more than one seat.”

"People who put their knees and/or feet on the back of your seat."

“The woman who's has a bag large enough to hold a suckling pig which she places on YOUR SEAT!” and,

“People who bring their bikes on the train. Thanks for clogging up one mode of transportation with another.”

1) Loud Talkers. More so than any other demographic of train rider, those who destroy any semblance of auditory peace are the absolute worst. They take on many forms.

They are the cretins who scream through profane phone conversations that make everybody around uncomfortable.

Heck, anybody talking loudly on the phone about anything but emergencies are awful.

The loud friends sitting together bantering about things that nobody else wants, or needs, to hear.

Here's a specific gripe: “That guy talking about his Tinder conquests loud enough for the entire car to hear. Women do not do this in my experience. Just guys.”

When it comes to music, offenders garnering disdain are those who “blast it like it’s a public service.” Or play it loud enough in their headphones for people to hear a few rows away. Or make like a wannabe American Idol and sing along to the music in their earbuds.

Finally, but not in totality, we draw your attention to people who violate the accepted mores of their location in the “quiet car.” It’s called a quiet car for a reason. Be quiet or go sit in steerage, you transit rat.

And listen up, conductors, we like that you remind us that the first car is the Quiet Ride car on the loudspeaker. What we do NOT like is how you and your compatriots do absolutely nothing to shush the violators. Step up and keep the quiet peace, yo.