It's possible every Philly ward exceeded 2014's voter turnout, according to one tracker 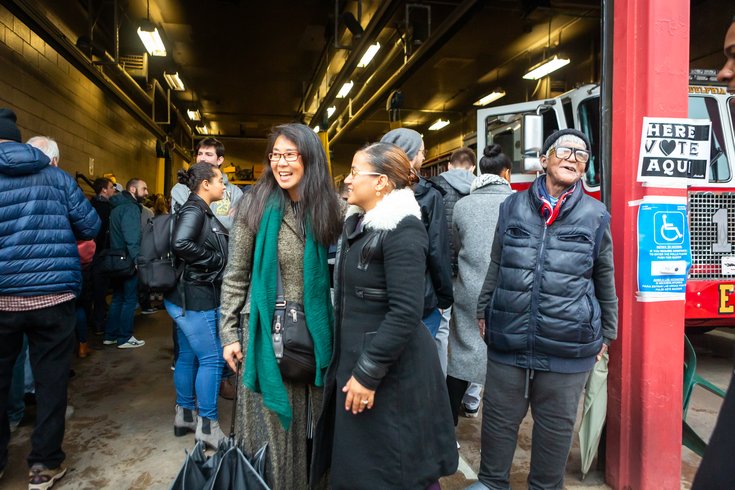 State Rep. Donna Bullock, center in black, greets Kay Kyungsun Yu at the Engine 13 fire station in Francisville early Tuesday morning during the 2018 midterm elections. "I've never seen lines like this before," said Yu. Usually the poll sees about 100 people, but by 9 a.m. more than 120 people had already cast their vote with more than 75 people still in line.

According to one Philadelphia voter turnout tracker, the numbers of votes cast on Tuesday exceeded the total votes cast in the 2014 midterm election by more than 150,000.

As of 9:00 p.m. Tuesday, all of the city's 66 wards were believed to have exceeded the total turnout in 2014, per the Philly politics and elections blog Sixty-Six Wards. The blog is tracking voter turnout using individual voters' self-reported data, so the numbers are unofficial, but theoretically as representative as early returns can be.

It's pretty straightforward: after voting, users share their division and voter number from their polling place.

Philadelphia is divided into 66 wards and each contains between 11 and 51 divisions, totaling 1,686. The Committee of Seventy provides detailed maps of each ward and its divisions.

I'll leave it running as straggler submissions come in, but let's consider this my estimate. pic.twitter.com/ZDrCMCVSft

Using the voter submitted data, Sixty-Six Wards also estimates that 555,305 people have voted across Philadelphia, with a 95% confidence interval. In the 2014 midterms, 381,503 Philadelphians voted.

To find out more about the tracker and to see the rest of the predictions, click here.