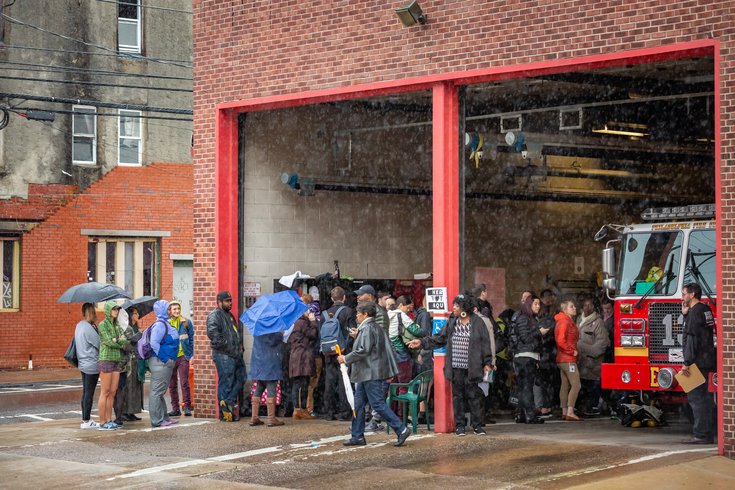 Some voters waited more than 90 minutes to cast their vote Tuesday morning at the Engine 13 fire station in the Francisville neighborhood of North Philadelphia. Higher than normal voter turnout, in addition to one voting machine being down shortly before 9 a.m., created long lines.

Early voters in Philadelphia are reporting longer-than-usual lines to cast their midterm election votes at polls on Tuesday, and we're not sure if we should be happy or frustrated quite yet.

By 11 a.m. Tuesday, data was showing large turnout numbers in polling places in both Pennsylvania and New Jersey, according to the Inquirer.

Lines obviously are a good sign during an election, but it could point to a larger democratic problem with our voting process — it might also mean a volunteer shortage, broken or not enough voting machines, or even misinformed volunteers.

We'll be monitoring social media all day to see if there are problems and what is causing them.

Had a problem voting today? File a complaint on the Pennsylvania voting website or report it to a team of ProPublica journalists by texting "VOTE" TO 81380 or tweet @Electionland.

In line to vote at Broad & Federal. The voting machines “aren’t broken” but “aren’t working.” No one in line can vote but if you live in the division, you can’t vote anywhere else. It’s 7:05 a.m. and we’re waiting on tech support (cc: @Committeeof70 @PhillyInquirer @KYWNewsradio)

#PhillyVotes: This is the longest line I’ve ever stood in to vote. #MidtermElections #ElectionDay pic.twitter.com/BwptSUBZ2C

Long lines here in the polling place in South Philly’s Ward 2. “I’d wait 25 hours if I had to,” I overheard someone say while waiting in line. I’ve never seen a line and I vote every election. #PhillyVotes #ElectionDay pic.twitter.com/NI83VuL1V3

#Happening at my #polling place at 12th / Carpenter = disgraceful. The poll workers are still trying to set up voting machines, on tech support “pushing buttons”, people are dropping out of line, no one has voted here. @PhiladelphiaGov #vote #MidtermElections2018

Every election I vote within 1/2 hr of the polls opening & usually my wait is... 1-2 people. This line is 15 min after opening (& there is a long hallway after you get in) #ElectionDay #PhillyVotes pic.twitter.com/dYZBmCkvRt

Standing in a long line in Philly (yay!), Beto shirt on (duh), waiting for the polls to open. #ElectionDay #VoteToday

There’s a rare line at my polling place this morning. And there are also free donuts. I’ll take both as good omens. #ElectionDay #Philly pic.twitter.com/dj02cGko3C

I Voted Today.
The line was long, the elders were chatting non-stop, and it felt like we were standing in a fire, but I made it through and chose the Spanish language sticker to prove it.#Philly #IVoted #PA #ElectionDay pic.twitter.com/PmouuurBCF

The line outside my polling place. My heart is singing. We also have a large number of first time voters. #Philly #ElectionDay pic.twitter.com/3XQNyHBm6n

Been voting at this polling place in #Philly for about five years and have never seen a line here this long. #ElectionDay pic.twitter.com/yzIEJ2WRn8

Before the polls opened, the line to enter in N. Libs wrapped around the sidewalk on either side of the door. #vote #philly #ElectionDay

Send us a photo of the line at your neighborhood poll or report a problem to PhillyVoice here. We will update this story as reports come in.