2018 New Jersey general election: What you need to know about the midterms 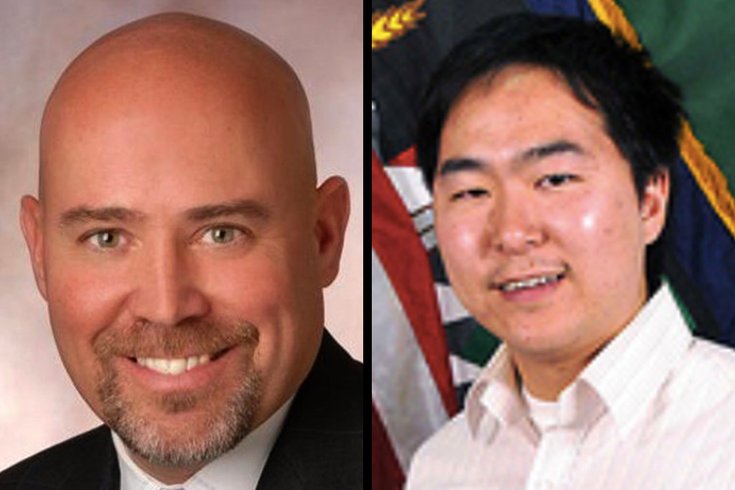 One of the tightest congressional races in New Jersey is between Republican incumbent Tom MacArthur, left, and Democrat Andy Kim, right, in the 3rd District. The contest is now considered a toss-up.

Democrats hoping to flip the U.S. House in Tuesday's midterm elections will have a close eye on New Jersey.

Many GOP-held seats in the House are seen as competitive. In South Jersey, one seat controlled by Republicans for 23 years is considered a likely Democratic win, and the race between a Republican incumbent and his Democratic challenger in a neighboring district is now considered a toss-up.

In New Jersey's other major plot line, the state's senior senator is fighting for his political life.

Also on the ballot: a special election for the Assembly, a statewide question on borrowing $500 million for education projects and a Camden city question about who should pick the members of its school board.

Here's a rundown of what South Jersey voters can expect, as well as a list of voter resources:

New Jersey's senior U.S. Sen. Robert Menendez, a Democrat seeking a third term, is facing a tough challenge from Republican Bob Hugin. Murray Sabrin of the Libertarian Party and Madelyn R. Hoffman of the Green Party are also on the ballot.

Menendez's re-election bid comes after his federal corruption trial ended in a hung jury and mistrial in November 2017. Federal prosecutors opted not to retry him.

RELATED STORY: 2018 Pennsylvania general election: What you need to know

And while the state hasn't elected a Republican senator in nearly 50 years, national Democrats are trying to save Menendez in a nasty-ad filled race now considered a toss-up.

In 1992, he won election to the U.S. House in the 13th Congressional District. In 2006, then-Gov. Jon Corzine appointed Menendez to fill the remainder of his unexpired term. He was elected to a full six-year term later that year and then re-elected in 2012. He is a graduate of St. Peter's University and Rutgers School of Law.

Hugin, 64, is the retired CEO of Celgene Corp., a pharmaceutical company, where he worked from 1999 to 2017 and was chief executive for the last seven years. He is a graduate of Princeton University and the University of Virginia. After Princeton, he was an active duty infantry officer in the U.S. Marine Corps, from 1976 to 1983.

Hugin has said he will sponsor legislation to pass term limits for both members of Congress to encourage more bipartisan cooperation and compromise in Washington. He supports elimination of the $10,000 cap on state and local tax (SALT) deductions and would make individual tax cuts permanent. He opposes all drilling off the East Coast.

Sabrin, 71, was a teacher in New York City schools before working as a staff economist for the American Institute for Economic Research. Later, he was a portfolio analyst and worked in commercial real estate and marketing. He subsequently became a full professor in the Anisfield School of Business at Ramapo College of New Jersey. He is a graduate of Hunter College and Rutgers University.

Hoffman, a Flanders resident, has been advocate for peace and the environment for nearly two decades, working with more than 200 New Jersey communities to protect against pollution.

She believes the so-called "Dreamers" should be protected and supports tuition-free college.

Also on the ballot: Tricia Flanagan of the New Day NJ party; Kevin Kimple of the Make It Simple party; Natalie Lynn Rivera of the For the People party; Hank Schroeder of the Economic Growth Party.

In the 1st Congressional District, which includes 52 municipalities in Burlington, Camden and Gloucester counties, Democratic incumbent Donald W. Norcross of Camden is challenged by Republican Paul E. Dilks of Turnersville, Libertarian Robert Shapiro of Cherry Hill and two others.

Norcross, 59, an electrician by trade and a former labor leader, is seeking a third term in Washington. Previously, he served four years as a state assemblyman and senator.

He is in favor of increasing the minimum wage to $15 an hour and supports blocking gun purchases for those on the federal “no-fly” list. He also says he will fight to protect health care coverage for pre-existing conditions and supports funding for Planned Parenthood and other women’s health providers. He also supports medical marijuana.

Dilks, a reverse mortgage specialist and former radio host, is active in the Washington Township Rotary and Knights of Columbus. He volunteers about 200 hours annually to his community. He is a graduate of Warner University.

As an opponent to most gun-control measures, he believes teaching the principles and practices of responsible gun ownership should be emphasized. He proposes that "Dreamers" have a 10-year path to citizenship, paying an initial application fee and annual fees that would finance construction of a wall on the border with Mexico. He supports a $15-per-hour minimum wage as long as employers incur a penalty for using automation to replace workers.

Shapiro, a teacher and lawyer, ran unsuccessfully for Congress in 2012 and 2014, and is a two-time candidate for the state assembly and senate. He is a graduate of Stanford University School of Law and Harvard University.

Also on the ballot: Paul Hamlin of the We Deserve Better Party and Mohammad Kabir of the Your Voice Heard Party.

The race for an open seat in the 2nd Congressional District, which includes 92 municipalities in Atlantic, Burlington, Camden, Cape May, Cumberland, Gloucester, Ocean and Salem counties, is between Democrat Jeff Van Drew of Cape May Court House, Republican Seth Grossman of Atlantic City and Libertarian John Ordille of Northfield.

Republican Frank Lobiondo, who has represented the district since 1995, is retiring at the end of his term.

Van Drew, a dentist, has been a state senator since 2008 and a life member of the Ocean View Fire Company. He has been called one of the most conservative Democrats in the state legislature.

While open to minimal changes to Obamacare, Van Drew says he would fight to protect health coverage for pre-existing conditions. He opposes and promises to fight off-shore drilling. And he does not support the idea of sanctuary cities.

Grossman, a Somers Point attorney, is a former Atlantic City councilman and Atlantic County freeholder. He is a graduate of Duke University and Temple Law School.

An unabashed supporter of President Donald Trump and his agenda, Grossman says he will work to repeal Obamacare, give each state the opportunity to experiment with its own health insurance system, and allow insurance companies to sell policies across state lines.

He backs the president's immigration policies, as well, saying the number of legal immigrants should be limited to 300,000 annually, a significant reduction from the more than 1 million legal immigrants annually today.

Ordille, a longtime driver for United Parcel Service, supports common-sense immigration reform while securing our borders. He says he would work to address the federal deficit and push for term limits in the U.S. Congress.

Also on the ballot: Anthony Parisi Sanchez of the Cannot Be Bought Party, Steven Fenichel of the Time for Truth Party and William Benfer.

One of the tightest races in the state is between Republican incumbent Tom MacArthur and Democrat Andy Kim in the 3rd Congressional District, which includes 52 municipalities in Burlington and Ocean counties.

The contest is now considered a toss-up. (Neither had primary opposition.)

MacArthur, 58, a Toms River resident, is seeking a third term in Washington. He is a graduate of Hofstra University.

MacArthur has voted in line with President Donald Trump nearly 95 percent of the time, according to fivethirtyeight.com, including support for the president's tax plan – it is increasing take-home pay for middle-class residents, he says – and his efforts to repeal Obamacare in favor of a plan that looked to curtail Medicaid expansion in the Garden State.

He says he has advocated for policies that lower taxes, reduce regulation and create more jobs.

Kim, a Marlton resident, is a national security expert who was a strategic adviser to Gens. David Petraeus and John Allen in the Afghanistan War. If elected, he would be the first Democrat in Congress of Korean descent.

One of his stated priorities is tax reform focusing on permanent tax cuts for the middle class instead of corporations and the wealthiest Americans. Similarly, he promotes a bipartisanship approach to government that puts power back into people's hands, not corporations.

He says he would work to lower prescription drug costs and protect people with pre-existing conditions.

Also on the ballot: Lawrence Berlinski of the Constitution Party.

Smith, a Hamilton resident, has represented the district since 1981. He touts his legislative skill and ability to get things done by citing legislative data from the Library of Congress that shows he ranks second out of all 435 current House members in writing bills enacted into law.

After graduating from the The College of New Jersey (then Trenton State College), Smith went to work at his parents’ sporting goods store. He also was president of New Jersey Right to Life.

Welle, a Rumson resident, is a U.S. Navy veteran of the Afghanistan War and software company executive. After 12 years of active duty, including time as the second-in-command of a warship, he returned home and started his company. He is a graduate of the U.S. Naval Academy in Annapolis.

Welle supports affordable and quality healthcare for all Americans, the protection of women's rights to make their own decisions about health care, equal rights for the LGBTQ community and more jobs in the state.

Rufo says he will work to control careless spending in the Congress. On health care, he supports opening up the marketplace to allow for a more free exchange of care.

Also on the ballot are Brian J. Reynolds of the Check This Column Party; Edward C. Stackhouse Jr. of the Ed the Barber Party; Felicia Stoler of The Inclusion Candidate Party; and Allen Yusufov of the Time for Change Party.

Democratic incumbent William W. Spearman faces a special election challenge from Republican Nicholas Kush in the Fifth Legislative District, which includes parts of Camden and Gloucester counties, including the city of Camden.

Spearman, 60, of Camden, was appointed to the Assembly seat in June following the resignation of Arthur Barclay.

Spearman, a former member of Camden City Council, worked for a decade with the South Jersey Transportation Authority, serving for five years as the agency's ethics liaison officer. He is a graduate of Rutgers University and Temple University.

Kush, a Runnemede resident, is a retired Teamster and father of a well-known GOP political consultant.

The ballot question is: "Do you approve the “Securing Our Children’s Future Bond Act”? This bond act authorizes the State to issue bonds in the aggregate principal amount of $500 million.

A “yes” vote would continue the current practice of the mayor appointing members of the Camden City Board of Education.

A "no" vote would mean voters would elect new members of the Camden City Board of Education as current members' terms expire.

You'll probably need to take an umbrella to your poll. The National Weather Service forecast calls for showers and possibly a thunderstorm before 3 p.m., then showers likely. Some storms could produce gusty winds and heavy rain. Patchy fog before 8 a.m. High near 68. Light and variable wind becoming south 6 to 11 mph in the morning. Winds could gust as high as 25 mph. Chance of precipitation is 90 percent.