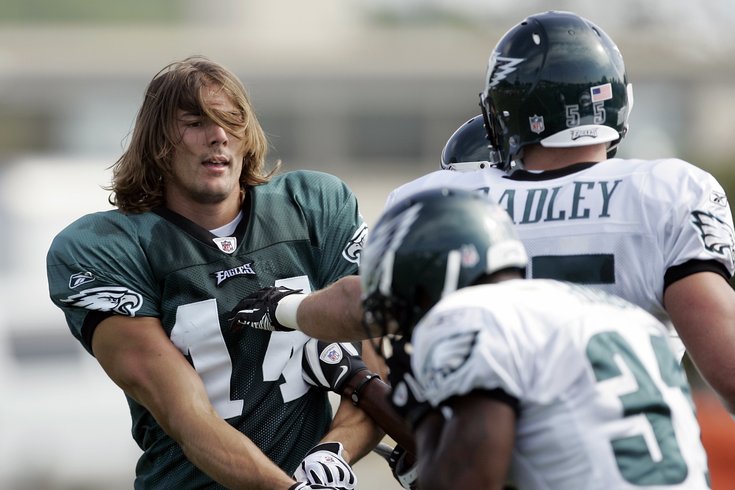 Even before the Kenny Chesney concert, Riley Cooper was a willing fight participant.

Every year, Eagles training camp produces the same story lines but with different players. Here are my 25 predictions for the Eagles' 2015 Training Camp:

1) Most likely to try to push the idea that there's a legitimate quarterback competition: Tie between Chip Kelly and Mark Sanchez

2) Most likely to get into a fight: Riley Cooper (Cary Williams will be missed in this department)

3) Most likely "Jeremy Maclin Award" winner, for the player who goes down in pain, but is actually fine: Sam Bradford

4) Most likely say in interviews that they are working hard, willing to do whatever they can to help the team succeed, and other boring non-answers: Jordan Matthews

5) Most likely to get annoyed by the same question over and over again about his role with the team: Mychal Kendricks

8) Na Brown Award winner (for the obscure player who gets a boatload of publicity for being a camp star, but will likely never produce the same way in games that matter): UDFA WR Devante Davis

9) Most likely camp star who will produce when the games matter: Tie between Nelson Agholor and Zach Ertz

10) Most likely "Fletcher Cox Award" winner, for the player who will kind of take it easy camp, then will be awesome when the games matter: Fletcher Cox

12) Most likely player to have one good practice that a national reporter attends, and the reporter is flabbergasted that said player is not being talked about by the locals: Miles Austin

13) Most likely reporter to be "that guy": Peter King

14) Most likely camp disappointment: Josh Huff (To note: I think real games are a better showcase for his skill set)

15) Most likely UDFA to make the roster: Brett Boyko

16) Most likely "Joe 'Krugs' Kruger Award" for the player who Chip Kelly starts referring to by their real name instead of their nickname, and you know at that moment they're going to get cut: Matt 'Barks' Barkley

17) Most likely to be practicing on another field while nursing an injury: Earl Wolff

18) Most likely camp battle to go down to the bitter end: Eric Rowe vs Nolan Carroll

19) Most likely to take the most pee breaks during practice: Jason Kelce

20) Most likely guy who has no chance of making the team, but people will include him in their 53-man roster projections: G.J. Kinne

22) Most likely "Asante Samuel Award" for never shutting up during practice: Brandon Graham

23) Most likely player whose role with the team won't come remotely close to the level of attention he receives: Tim Tebow

24) Most likely player whose role with the team won't come remotely close to the level of attention he receives (non-Tebow edition): John Moffitt

25) Most likely surprise player to make the team: Tim Tebow