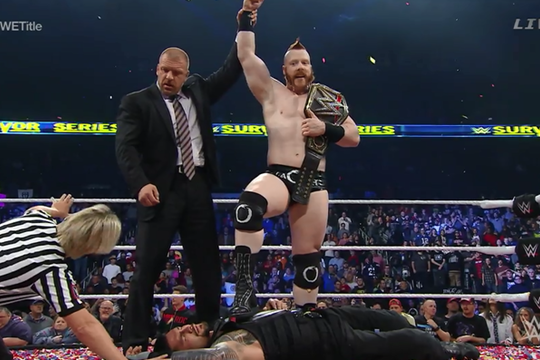 The 2015 edition of the Survivor Series is in the books. 25 years of The Undertaker was nothing more than a noted glorified squash match and we have a new WWE World Heavyweight Champion who wasn’t even in the tournament.

As a possible threat of a terrorist attack loomed, WWE made sure to communicate with authorities to make sure all the proper safety measures were in place to protect not only the fans attending the Philips Arena in Atlanta, Ga., but also themselves as well. They had extra security in place for the event.

Here’s what went down Sunday night:

The Miz, Bo Dallas, Stardust and The Ascension vs. Neville, Titus O’Neil, Goldust and The Dudley Boyz

Goldust is back! The bizarre one has been sidelined since the spring with a shoulder injury and needed surgery to fix the issue. That was pretty much the biggest story of the match. There wasn’t great action, but it was cool to see the first of two elimination matches take center stage on the pre-show.

Goldust eliminated Viktor by pinfall via a powerslam.

Bubba Ray eliminated Konnor by pinfall via a Rock Bottom.

The Miz eliminated Neville by pinfall via the Skull Crushing Finale.

Goldust eliminated The Miz by pinfall with a schoolboy.

Titus O’Neil eliminated Bo Dallas by pinfall with the Clash of the Titus.

D’Von Dudley eliminated Stardust by pinfall via a 3D with Bubba Ray.

Your sole survivors: The Dudleyz, Titus O’Neil and Goldust

This match was an excellent opener, and I really thought it set a good tone for the night. There were some good sequences during the match, with Del Rio trying to get his armbar submission on Reigns, but Reigns would counter with a sit-down slam.

This match was also pretty good, but not match of the night worthy as I thought it would be. This could be the start of a great program between the two for the Intercontinental Championship, but we still don’t know what the future will hold for both.

After a flurry, Ambrose hit Owens with Dirty Deeds to pick up the victory.

Ryback, Lucha Dragons and The Usos vs. The New Day, Sheamus and King Barrett

Well, here’s a match that was not advertised before Sunday night, much like the Kickoff Preshow elimination match. Xavier Woods was sporting a new hairstyle, which was also a highlight of the night. The Tag Team Champions decided to duck out early once Big E was eliminated, and Sheamus was left alone against Ryback, Kalisto and Jey Uso. Needless to say, he didn’t survive, and that likely made many people believe the next time we would see him would be on Monday Night Raw. Not the case.

Sheamus eliminated Sin Cara by pinfall via a Brogue Kick.

Jey Uso eliminated Big E by pinfall after a big splash from the top rope.

Both Woods and Kingston were eliminated by countout after walking Big E backstage.

One would have to imagine the angle that played out last Monday on Raw would be to generate a lot of heat for this match. However, in front of the Atlanta crowd on Sunday night, Charlotte and Paige would wrestle in front of a nearly completely silent crowd.

Maybe those in Atlanta were just upset their Falcons lost to the Colts earlier in the day, but their loud reactions to the likes of Reigns and Ambrose would render that a lie. There were no chants during this match, and it felt eerily like matches of Divas past when it became an opportunity for a viewer to take a break. Not good.

Some think that these two women should have just had a brawl given the angle from Raw. While that probably would have been more entertaining, Charlotte’s promo earlier in the night would suggest she wasn’t going to let Paige throw her off her game anymore, and her game is not brawling. So for Charlotte and Paige to partake in a brawl, it would render Charlotte’s promo useless. So, I sort of get why they went the technical route for the match.

The story of the match might not be one that most fans agree with, but it did make sense. Eventually, Charlotte locked Paige in the Figure Eight and Paige tapped out.

Ziggler’s looking more and more like 1992 heel era Shawn Michaels, and I like it. He even teased the Sweet Chin Music band tune up during the match, so I have to wonder if he’s working his way towards an old school HBK type gimmick. I bet he could pull it off.

Breeze looked very good in his singles pay-per-view debut, but Ziggler often makes others look very good. He’s been often compared to Curt Hennig, who made the likes of Hulk Hogan and the Ultimate Warrior look like a million bucks. Ziggler’s a great guy to work with to be able to do that, and Breeze really reaped the benefits on Sunday night.

On a night he’ll remember forever, Breeze landed the Unprettier on Ziggler for the first pay-per-view main roster win of his career.

The Undertaker and Kane vs. Bray Wyatt and Luke Harper

The Undertaker’s entrance for this one was absolutely awesome. It included two Taker symbols doused in fire along with a casket video screen with images through the years of the Dead Man.

I love the fact WWE picked Wyatt and Harper to represent the Wyatt Family in this match, but it really should have been a whole lot more than it was.

The Brothers of Destruction took out Erick Rowan before the match began, and then took out Braun Strowman during the match by chokeslamming him through the announce table. Luckily for Wyatt, he wasn’t pinned, so maybe, just maybe, that’ll play into the future a little bit.

The Undertaker would tombstone Harper for the win.

Your winners: The Undertaker and Kane

This was as close to a dream match as we could get in November 2015, especially with Seth Rollins on the shelf until the middle of next year. However, this match left a lot to be desired, and was horrifically short.

The ending came out of nowhere when Reigns speared Ambrose, after kicking out of Dirty Deeds shortly before, and pinned him to win the WWE World Heavyweight Championship for the first time ever.

Fireworks went off and confetti came down as Triple H made his way to the ring to offer a handshake of congratulations to Reigns. Reigns looked at his championship and then speared the COO of the WWE, and then ran into a Brogue Kick by Sheamus, who was there to cash in his Money in the Bank contract.

Once the bell rang, Reigns would kick out of the pin attempt, forcing Sheamus to try another Brogue Kick. Reigns would duck under and go for a spear, but Sheamus caught him with a second Brogue Kick to slay the dragon and win the WWE World Heavyweight Championship.

I have a few thoughts on this, and they’re very critical of WWE. First, to have Reigns win his first title and now have it mean nothing is absolutely ridiculous. If WWE is really going to push Reigns as their “next John Cena,” they need to give him the same reign they gave Cena when he won the title in 2005. He has to have a huge win and long title reign to really cement his legacy as “the guy” in WWE. This does him absolutely no favors and makes him look ridiculous.

That brings me to my second point. The whole angle was a means to give Reigns even more sympathy than he had in his feud with Wyatt and at WrestleMania when Rollins pinned him to win the championship. Since then, Reigns has been a project to the creative team to rebuild his character to make sure the fans were behind him 100 percent. Of course, anyone with the ability to hear knows he’s gotten a lot better reactions as of late compared to earlier this year. Sunday night, they put him in a bad spot against Ambrose, who the fans will cheer even if he turned heel on Reigns. Reigns was booed heavily throughout the main event and even after Sheamus defeated him. In fact, once the WWE Network cut away to the new episode of Breaking Ground, they came back with bonus footage of Reigns crying in the ring and getting up and walking backstage – all the while being booed by the fans. Not exactly sympathetic fans in Atlanta on Sunday night.

Third, Sheamus is perhaps the worst Money in the Bank briefcase holder to win the championship. He’s been booked like a joke since he won the briefcase. Jack Swagger was a better cash-in candidate than he was. But now, WWE has a chance to rebuild Sheamus, even though he already has the title. Will anyone ever not look at him as a joke anymore? I’m not so sure.

And finally, why are we supposed to feel sympathy for Reigns anyway? He’s the one who decided to show up Triple H and not shake his hand and then spear him out of nowhere. That’s not something a huge babyface does unprovoked. It just seemed so out of place to me and the only way I feel bad for Reigns is because the writing is making him look terrible.

Maybe on Raw we’ll get some better character development, and maybe they’ll make Sheamus not look like a joke. Maybe they’ll give Reigns more of an attitude so the fans can get even more behind him. Maybe we’ll see Goldust again!

Check back here tomorrow morning for your Raw roundup, which will include all the fallout from Sunday.