The biggest events in Philly to look forward to in 2016

The new year has a lot going on, don't miss out

The past year has been full of engaging stories and breaking news. While it's hard to predict what exactly 2016 will have in-store for Philadelphia, there are a few things you can already start marking on your calendar. These noteworthy events are the must-do, can't-miss Philly occasions to look forward to in the new year.

The largest and oldest indoor flower show in the Unites States celebrates 100 years of National Park service at the 2016 event. Visitors to the show will enjoy live entertainment, gardening how-to workshops, lectures by experts and creative park displays. The week of the show begins with an exclusive black-tie preview party.

The Science Behind Pixar

For the first time, get a peek at the magic behind Pixar movies. This exhibit is the perfect mix for all ages. Children get a chance to see their favorite Pixar film characters, including Buzz Lightyear, Dory, Mike and Sulley, Edna Mode and WALL-E. Adults will enjoy the 40-plus hands-on activities and learn the science, technology and engineering concepts used by the Pixar artists and computer scientists. 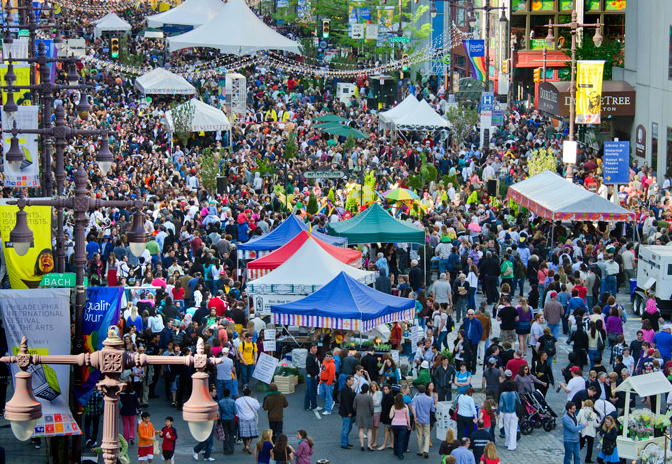 Kimmel Center for the Performing Arts/PhillyVoice

The PIFA Street Fair returns in April 2016 with a daylong street fair to wrap up the citywide arts celebration.

Philadelphia International Festival of the Arts (PIFA) returns in 2016 from April 8 through 23. This will be the third installment of the Kimmel Center curated event. The theme is "We Are What We Make," where both local and international artists will participate in the art fest extravaganza through various genres and forms.

A grand-scale fire and sand installation that tells the story of immigrants around the world will serve as the grand opening of the festival, while the popular PIFA Street Fair on Broad St. will close the event.

Tickets are on sale now for this massive arts fest.

Philadelphia is one of 21 nationwide stops on the tour. Wizard World Comic Con events bring together thousands to celebrate the best in pop culture, movies, graphic novels, comics, toys, video gaming, television, sci-fi and more. There will be celebrity Q&A’s, a film festival, comics, costume contests and parties.

Actor Norman Reedus, aka Daryl in the AMC television series "The Walking Dead," will make a celebrity appearance at the Philadelphia event in 2016, as well as a range of other big names.

Philadelphia sports did not have the best year in 2015, but 2016 has a highlight: Copa America Centenario is coming. Lincoln Financial Field will be one of ten venues in the United States that will host the soccer event, which will feature the top national teams from North, Central and South America.
This is the first time in the tournament's 100 year history that it will be held outside of South America.
Friday, June 3-26
Lincoln Financial Field

Established in 2008, Philly Beer Week is the largest beer celebration of its kind in the United States. During the week-long event enjoy festivals, beer gardens, pop-ups, craft beer crawls, dinners and special bar events. It's the perfect excuse to try a new beer or new spot.
Friday, June 3-12

Philadelphia has a lot of political history (hello, birth place of America) but has less modern day large-scale political events. The last time the Democratic National Convention was held in Philadelphia it was the year 1948. Now in 2016, delegates, elected officials and citizens from around the nation will be in the city, where the Democratic Party will select its nominee for president of the United States.

With the influx of visitors and the drama surrounding the presidential election, Philly is sure to have a lot going on during the event.

The Grammy Award-winning artist, who recently released her latest album "25," will be touring stateside for the first time in five years. This will also be the first time she is performing at Wells Fargo Center.

Tickets for the concert sold out in minutes, but here's hoping the prices on secondary market sites like StubHub! become reasonable before the show dates.