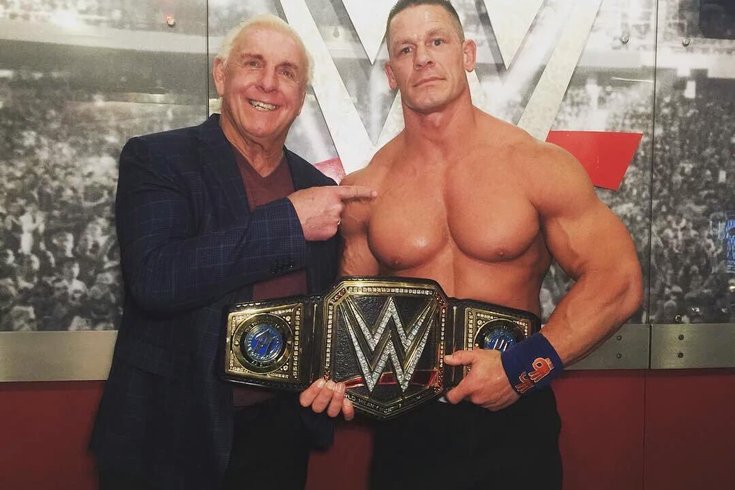 The 30th annual edition of the Royal Rumble took place inside the Alamodome in San Antonio on Sunday night. Many were pumped to see the liked of Goldberg, Brock Lesnar, The Undertaker and more take part in the 30-man over-the-top-rope battle royal, along with seeing AJ Styles defend his WWE Championship against John Cena, Roman Reigns vie for Raw’s gold against Kevin Owens, and Bayley’s first chance at becoming the Raw Women’s Champion.

Though the night didn’t end like some people had wished it would, there was still many good things that happened Sunday night. Let’s get to it:

• Raw Tag Team Championship: Luke Gallows/Karl Anderson d. Cesaro/Sheamus (c) by pinfall after Anderson rolled up Cesaro and grabbed his tights. Sheamus accidentally knocked out one referee with a Brogue Kick, which allowed Anderson to cheat without a second referee seeing it.

• Nia Jax d. Sasha Banks by pinfall after hitting her with a monstrous Samoan Drop.

I had high hopes for this match but ultimately predicted Flair would retain her Raw Women’s Championship. And she did. But the match wasn’t as good as I had hoped it’d be, especially being given the first match on the main card. Bayley still seems a little bit uncomfortable in these main roster matches. She’s great in the ring, as evidenced by her classic matches with Banks in NXT. Hopefully, this is just a learning curve because main roster matches are very different than the matches we see in NXT.

Flair hit Bayley with Natural Selection on the ring apron before pinning her to retain her title.

Kevin Owens (c) vs. Roman Reigns (Chris Jericho locked in a shark cage above the ring)

It took a while for Jericho to get locked inside of the shark cage, even after he and Owens attacked Reigns before the match began, but it happened. Reigns fought back and eventually Jericho was lifted to the heavens. Or like 50 feet up.

He dropped down some brass knuckles for his best friend to use, but that didn’t matter. Reigns kicked out. There was a nasty chair spot where Owens build a castle of chairs only to fall through it later after a Reigns punch. It looked like it hurt.

When it looked like Reigns was set to defeat Owens, Braun Strowman came out and attacked him. He laid him out and recovered Owens’ prone body through the announce table and Owens was able to cover Reigns for the pin.

I absolutely have no interest in this division right now. There’s nothing about it that makes it unique except for the purple ropes. I liked that Neville won here because I’d like to see someone new chase him and make the cruiserweights, um, watchable.

"The CORONATION has HAPPENED at the #RoyalRumble!!" - @MauroRanallo@WWENeville is the NEW #Cruiserweight CHAMPION, def. @GottaGetSwann!! pic.twitter.com/T3m2oGWGS9

Neville got the submission win over Swann with the Rings of Saturn.

Wow. That’s pretty much all I can say. This was easily the best match of the year so far in WWE and absolutely rivaled Okada-Omega from Wrestle Kingdom 11 in New Japan for Match of the Year. It’s January, yes, but it’ll be very hard for any two people in WWE to top this match.

It had everything. Drama. Excitement. Entertainment. Near falls. And the end of the match was perfect with Cena making sure he gave Styles two Attitude Adjustments so he couldn’t kick out. Styles looked stellar in defeat, so anyone that says he was made to look bad is just flat-out lying.

Cena’s win ties him with Ric Flair in all-time number of world title reigns with 16. I’m sure we’ll see Cena break the record at some point, but it’s enough for me to just sit back and enjoy this time and how we’ve seen history. Cena’s had 16 world championship reigns in less than 12 years. Simply amazing.

Randy Orton eliminated Reigns, who was a surprise entrant at #30 to win the Royal Rumble match for a second time in his career.

Here’s the order of the entrants, order of elimination and who eliminated them.

There were a few storylines that could come out of this Rumble match, but, overall, I wasn’t impressed with anything heading into Raw or SmackDown this week. Strowman put on a great showing, but when he was eliminated (by Baron Corbin, no less), the entertainment value suffered a little bit. Lesnar, Goldberg, and The Undertaker all entered towards the end of the match, but as far as entertainment value goes, they probably could not have done better. Goldberg eliminated Lesnar almost immediately, keeping that storyline alive and well. I just am looking forward to when Lesnar destroys Goldberg heading into WrestleMania. If that happens.

Goldberg was then eliminated by The Undertaker, who was then eliminated by Reigns. They stared each other down, but I’m fairly certain Reigns’ target will be set on Strowman for interfering in the WWE Universal Championship match heading into WrestleMania rather than a possible Reigns/Undertaker match. Or maybe they’ll just do Reigns/Strowman at Fastlane. Who knows anymore? Predicting wrestling is probably not the safest thing to do with how many things change through the course of days.

No surprise entrants, really. Tye Dillinger was probably the only one. That also hurt the Rumble in many’s eyes, including myself.

Where does Orton go from here? Does Bray Wyatt win a title, allowing him and Orton to square off? Does Orton go after Cena or Owens? Does another Orton-Cena match really make any sense? Especially when nobody wants to see it?

Overall, I thought this was a very good pay-per-view. The undercard was spectacular and saved the Rumble match from making the show a thumbs down. As we head into Raw and SmackDown on Monday and Tuesday, respectively, hopefully, the Road to WrestleMania gets a little bit clearer.