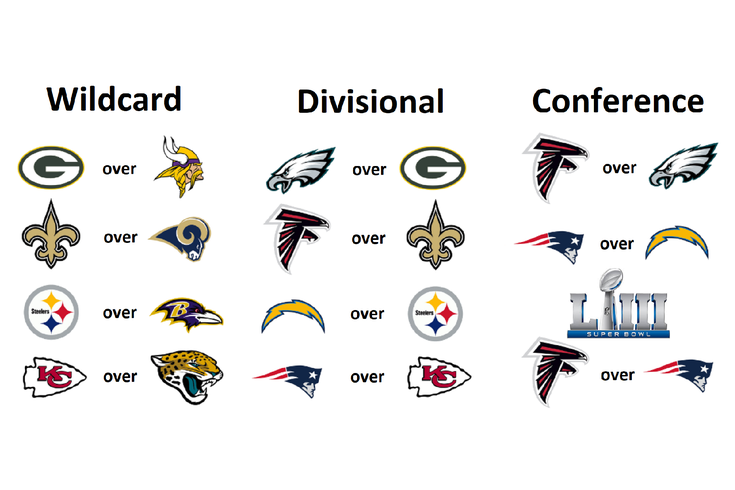 The start of the 2018 NFL season is just three days away, so it's time to lay out our predictions on who will be good, who will be bad, who will win the Super Bowl, and which individual players will shine.

• The Falcons are a damn good team, complete with playmakers on both sides of the ball. I believe they're ready to take a big step forward after a predictable "down year" in the wake of their devastating loss in the Super Bowl.

• The season hasn't even begun yet, and the Eagles are already dealing with losses to key players. Their Week 1 matchup against Atlanta could end up having major playoff seeding implications.

• The Rams are going to a fascinating case study in terms of adding a lot of talented-but-volatile players.

• The Saints are the third best team in the conference, in my view, behind the Eagles and Falcons. They'll have a top 5 offense, as they always do. The difference with the Saints last year (and I think this year as well) is that their defense is competent, as opposed the tire fire it's been most years over the last decade.

• The Vikings' defense is obviously very good, but their offensive line is not going to hold up in the playoffs against good defenses, as we saw in the NFC Championship Game last year.

• The Patriots play in the otherwise horrendous AFC East, which is such an incredible advantage. In the NFC, the Pats might only be a wildcard team heading into 2018, as this is not one of their better rosters. In the AFC, however, they're the overwhelming favorites to fall into the No. 1 seed.

• I'm going to look back at these predictions in a year and laugh at myself for being fooled by the Chargers for the 10th time.

• The Steelers will return their Ben-Brown-Bell trio for one more year at least, but they don't have much more than that.

• The Jaguars' defense is nasty, but ultimately, not to point out the obvious, their quarterback remains Blake Bortles.

• Andy and the Chiefs are just kind of "there" at this point, a perennial playoff team that scares nobody in January.

• The Ravens were +92 a season ago in point differential, despite a banged up (and downright bad) Joe Flacco, who will be better in 2018.

Here's my pointless game-by-game look at the playoffs:

Aaaaaand who's going to be really bad:

• The Buccaneers are a mess, with a suspended Jameis Winston, and a bad defense. That whole front office and coaching staff is going to get cleaned out.

• There was a time I liked Ryan Tannehill, but he doesn't have much to show for a player heading into his seventh year in the league, and now he's also coming off an ACL tear. Adam Gase seemed like the best coaching candidate in 2016, but he feels like Chip Kelly reincarnated, in terms of player relationships.

• I remember last year, observers were sure the Browns were going to make a big jump, and then they went 0-16. They'll be better in 2018, as they did acquire talent, and their insanely young roster of a year ago has had some time to grow, but I'm not buying a huge turnaround until they actually figure out how to win games.

• OBJ is back and Saquon Barkley could be a stud, but ultimately, that Giants offensive line is still bad, and has no continuity whatsoever. Meanwhile, on defense, there isn't much in the way of guys who can get to the quarterback, and it's going to take a few years to find players to fit the scheme change that was implemented.

• Sammy Sleeves, AKA Sleevie Wonder, is going to complete 80 percent of his passes with a YPA of 5.8, before he's lost for the season after Week 3.

And finally, the individual awards:

• MVP, QB Drew Brees, Saints: I think he's got one last great season in him, with a near-elite receiver in Michael Thomas, a dynamic back in Alvin Kamara, and a very good offensive line.

• Offensive Player of the Year, RB David Johnson, Cardinals: His team stinks, but he's great, and with Sleeves dumping the ball down short of the sticks on the regular, Johnson could rack up huge receiving numbers in addition to whatever he gets on the ground.

• Defensive Player of the Year, DT Fletcher Cox, Eagles: This would be a big jump for Cox to make, but there just seems to be something different about him this season. I think he has a chance to dominate to a degree that he hasn't reached in the past.

• Offensive Rookie of the Year, WR Calvin Ridley, Falcons: Ridley is going to get opportunities from Day 1, and he'll benefit from Julio Jones being on the field with him.

• Defensive Rookie of the Year: LB Roquan Smith, Bears: I loved Smith's playmaking ability at Georgia. He should top 100 tackles in his rookie season, while also creating turnovers.

• Comeback Player of the Year, Aaron Rodgers, Packers: I won't try to be a hero here. Easy pick.

• Coach of the Year (not pictured), Matt Nagy, Bears: The Coach of the Year Award is mindless drivel. It typically goes to the coach of the team that had the biggest turnaround from one year to the next, and I think that team will be the Bears.