2019 Royal Rumble recap: 'The Man' gets her shot; 'The Architect' builds his path 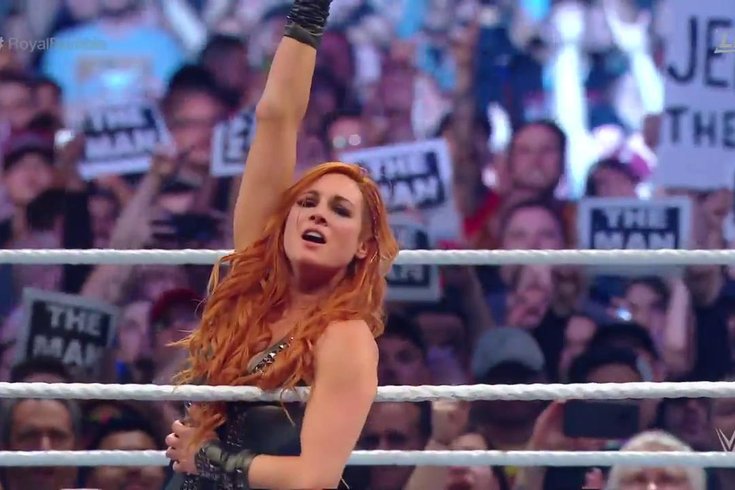 Becky Lynch celebrates a huge win after being a surprise entrant in the women’s Royal Rumble Match.

WWE was looking to start the 2019 pay-per-view calendar off with a bang with a stacked card, and, well, it did just that with 48,193 people in attendance at Chase Field in Phoenix Sunday night.

With rumors surrounding Ronda Rousey’s immediate future with WWE [reports are saying she’ll take a break from WWE to begin a family, if not leave WWE entirely to do so], eyes were especially glued to the women’s Royal Rumble match. And it did not disappoint.

The men’s Royal Rumble match also had quite a surprise with its final entrant, along with a few other surprises. But in the end, it was The Architect that began building his path on the Road to WrestleMania.

Let’s get to the action.

I’m not exactly sure what they were going for with this match, but the RAW tag team scene has been a joke for quite a while. It’s going to take more than a preshow win over a thrown together team to make it important.

This is definitely a match that on paper could sit just fine on the regular pay-per-view, but with how WWE seems to have limited these two in terms of their ceiling, this match was just fine here on the preshow.

Lana at one point found herself on the ring apron admonishing Nakamura for trying to cheat by taking the turnbuckle padding off one of the corners, and Rusev accidentally hit her off the apron, injuring her ankle. With Rusev staring at her and begging her to get up, Nakamura hit a Kinsasha from behind to regain his championship via pin.

The WWE cruiserweights have been putting on great matches for months, and Sunday night was no different. Maybe one of these pay-per-views will have them on the main card, because they are really putting in the work and earning that spot, but not getting it.

Of course, Sunday night’s match was fantastic. Lots of high-flying spots that made sense and stories that were easy to follow. There was a point in the match where anyone could buy anyone winning, which is rare to do in pro wrestling today.

Ultimately, the champion retained after hitting Hideo Itami with Murphy’s Law. Don’t be surprised if Itami winds up on SmackDown Live in the near future.

This match being the official pay-per-view opener made lots of people happy with their women’s Rumble predictions. There were a lot of great spots after a slow start, including a Fisherman’s Suplex from the ring apron to the floor by Asuka on Lynch.

The two engaged in a slapfest a little bit later, and then Lynch hit the Super Beck-sploder off the top rope that didn’t get the job done, surprisingly. Asuka tried to lock in her patented Asuka Lock, but it was countered by Lynch with an… Asuka Lock. The SmackDown Women’s Champion was able to escape and eventually was able to lock in her Asuka Lock again, bridge forward so Lynch had no way of getting out, and ultimately making the challenger tap out.

Such a great finish and believable and even though The Man’s character probably wouldn’t quit, it just further caused speculation about what might happen down the road.

There were a few cool spots in this match, including a Big Swing to Shane McMahon by Cesaro after a failed coast-to-coast try. With Cesaro holding McMahon up, Sheamus went for a Brogue Kick but Miz pushed Cesaro into the path of kick then took out Sheamus. McMahon climbed up to the top and performed a shooting star press to get the win.

I’m not sure what this means for the tag team division on SmackDown Live, but hopefully it’s good.

This match really picked up after the first few minutes, and it became a pretty good one.

Rousey locked in her armbar outside the ring at one point with Banks tapping, but obviously it didn’t count because it wasn’t in the ring.

Later, Banks got the Bank Statement locked in on Rousey and utilized part of her outfit to pull on her head, which was a cool little wrinkle. Rousey would hit Banks with a gutwrench slam followed by a Piper’s Pit slam to get the victory by pin.

Becky Lynch won the 30-Woman Royal Rumble Match to get a championship opportunity at WrestleMania.

There were some great spots in this match and for the second straight year, I think this was probably the better Rumble match of the pay-per-view. The surprises were pretty cool and having Lynch step in for Lana to take the last spot [though she’ll technically be #28] pretty much cemented the ending. But that’s okay, because I’ve said it before - predictability in professional wrestling can be good. This was one of those moments.

Yes, Lynch tapped out earlier in the night. But all that does is make Asuka stronger. Lynch is on a roll and is likely going to main event WrestleMania at MetLife Stadium and win the RAW Women’s Championship. I honestly believe that’s going to happen. And it’s a great thing because of how over she is. The women’s divisions on both shows have really hit a stride and it’s becoming must-see every single week. It’s been that way for a good while now.

I’m not sure what this match was lacking, but it was something. It’s usually always hard to hear the crowd much louder inside a huge stadium during these wrestling shows, but I’m pretty sure nobody was really hot for this one.

Erick Rowan, who suffered a torn bicep at SummerSlam last August, made his way down to the ring and stood there for a moment. Bryan accidentally struck the referee with a kick, so Rowan decided to get in the ring and slam Styles to the mat, and that allowed Bryan to get the pin and victory. It seems like Rowan and Bryan are aligned now, and that could be fairly interesting moving forward.

Now this was a fun one. Even though I’ve gone on record saying I really don’t want to see Lesnar as World Champion in WWE anymore, the dude can still bring it when he wants to. And that’s the problem. When he wants to.

His last two matches against Bryan and now Bálor have been pretty great. Lesnar’s making them look like stars and even though he should’ve lost the title by now, hopefully it bodes well for Bálor in the near future.

The best part about this match was Bálor getting pretty much all of his offense in and the story being Lesnar is just too strong to get pinned, as he locked in the Kimura Lock to make Bálor tap after the challenger almost had him when he hit the Coup de Grâce.

I dug a lot of the surprises in this one, but the biggest surprise came during R-Truth entrance at #30. Nia Jax attacked him and took his spot, and did a damn good job at it. She wasn’t only giving the moves and eliminated Ali, but she took some moves, too. It was like she belonged there and it wasn’t out of the ordinary. That’s where WWE deserves a ton of credit in letting her take the moves instead of it being a token female appearance in a male Rumble match. The guys looked at her as a legitimate threat. Good stuff.

• Lynch is going to get her WrestleMania moment in the main event and hold the RAW Women’s Championship high.

• Ziggler had said he was on hiatus from the company, but the dude just doesn’t move the needle at all. I like him, but as a performer, it’d be better if he and WWE just moved on.

• I’m done with Strowman, too. He’s not special anymore. WWE took a fantastic thing and made it bland and boring again. Stop me if you’ve heard that before.