51-foot marijuana joint coming to Philly for the DNC 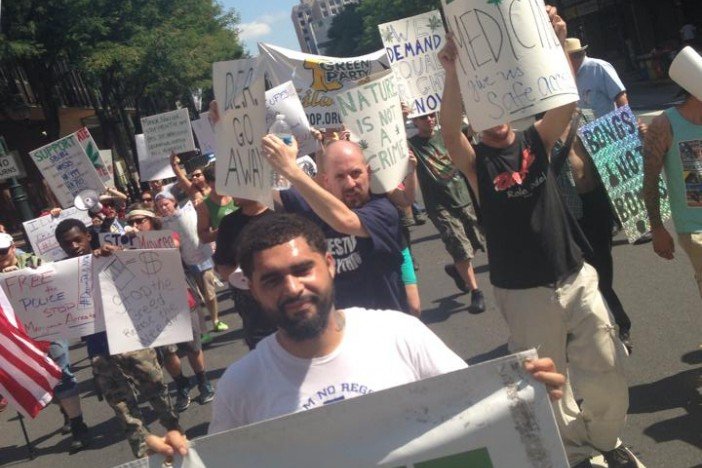 When the Democratic National Convention comes to town next week, the city will be abuzz with activity at a time when marijuana activists find themselves making political progress much quicker than they’d imagined they ever could.

So, it only makes sense that several DNC events will have a marijuana sensibility to them, none more visually compelling as activists and supporters’ plans to march a 51-foot joint from City Hall to the Wells Fargo Center.

Before we get to the litany of events planned, let’s talk a bit about what goes into not only making a 51-foot joint, but how to transport such a thing the near-length of South Broad Street.

Chris Goldstein of Philly NORML describes it as such: You know those big dancing stick figures often seen outside car dealerships? Well, imagine one of those is modified so instead of standing straight up in the air thanks to a fan at its base, it lays horizontally.

Puffed previously at marijuana events near the White House and in New York City, it will make its first Philadelphia appearance on July 25 as part of a DCMJ event tentatively starting at 1 or 2 p.m. for the march down to Conventionland.

Volunteers will help carry the 51-foot joint the entire length. It will then make a return three days later when local activists take their turn.

“The marijuana movement has to bring some levity to the tense times we’re living in,” said longtime activist Nikki Allan Poe, noting that cannabis plays a part in issues at the “forefront of society right now” including the drug war, prison overcrowding, the police state and medical healing. “We wanted to do a protest that’s fun.

“Times are changing. Things are getting different. Marijuana can unite this country. We’re the new America. We want to be heard, with a message of peace, compassion and care for people. This directly affects our community so we want our piece of the pie, standing up for ourselves. It’s an exciting time to be alive.”

For his part, Goldstein wouldn’t even consider that what they’re doing is a protest. With the DNC platform siding against the very thing that he and Poe got locked up for protesting in Independence Mall three years ago, it’s more of a celebration of changing times.

“Removing marijuana from the Controlled Substances Act was, three years ago, a very radical position. Now, Bernie Sanders has a bill in the Senate about it, and the party is seriously considering it. We’ve had decriminalization here since then,” he said. “Are we protesting or are we out there cheering them on?

Those platform discussions are expected to be discussed at the convention itself on July 26, and voted upon on July 27. Surrounding those dates are numerous other marijuana-related events in Philadelphia during the DNC.

From 6 to 8 p.m. on July 24, the Marijuana Policy Project will host a fundraising reception with U.S. Rep. Earl Blumenauer (D-Oregon) at the Union League. (Tickets for the $250 event must be purchased in advance).

From 8 to 12 p.m. on July 25, local activists will host a DNC Cannabis Kickoff Party at Connie’s Ric Rac (1132 South Ninth Street). It’s free to attend. (Earlier that afternoon, there will be a “Smell the Freedom” demonstration where people will gather for a 4:20 p.m. “flash toke” at a yet-to-be-determined location.)

Details for the July 28 Cannabis Pride Parade – which will employ the 51-foot joint and represents the pinnacle of local activists' efforts – will be released Monday, as well.

Goldstein said it will offer a chance to reflect on the strides they’ve made in recent years and “celebrate how important it is that half of the body politic is now on our side.”

“I was talking to a delegate about it recently, and they said often, the platform doesn’t translate into much, but they’re adopting a platform that our members are already working on,” he said. “That takes away excuses at every level of government, from City Council to the president, and gives us an opportunity to work on this policy. It really is a big deal.”