Philip Basser, a veteran raised in a foster home, has lost a sister, a daughter and wife. But he still loves life — and the Birds. 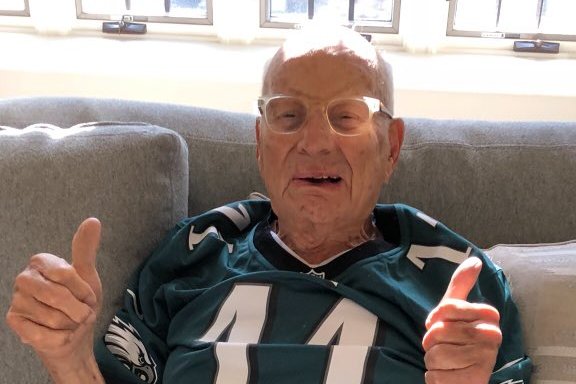 The star of Sunday night's playoff game in Minneapolis was wide receiver Stefon Diggs, who scored a walk-off touchdown to send the Vikings to the NFC Championship Game in Philadelphia and, possibly, back to U.S. Bank Stadium for the Super Bowl.

A close second may have been Millie Wall, the 99-year-old Vikings fan who was given tickets to the game, given props on national television and surprised again with Super Bowl tickets from NFL Commissioner Roger Goodell.

Philip Boris Basser – a lifelong Philadelphia Eagles fan who himself will turn 100 in March – considers himself a "gentleman," so he declined the opportunity to lob any trash talk Millie's way before Sunday, when her Viking's come to the Eagles.

"We are friendly competitors," Basser told PhillyVoice through his grandson, 18-year-old Josh Potter, who passed along PhillyVoice's questions via email. "That said, I would say, to Millie, 'I wish for a thrilling game.' To the Vikings I would say, 'Better luck next time!'”

To say Basser is a lifelong Birds fan is technically incorrect – not because it's hyperbole but because he is older than the franchise, born 15 years before the Eagles played their inaugural NFL season in 1933.

His fandom for the team got some buzz on social media when Potter responded to a tweet about Millie with a picture of his grandpa, writing, "Looks like we got a battle of the centenarians!" Since then, Phil's become something of a celebrity, getting shout outs on NFL Network in title game preview segments.

"One could look at my life and see the hurdles and the tragedy ... These were all devastating, but I choose to wake up each and every day seeing the best that life has to offer."

On behalf of the Eagles, Basser, who now lives in New York with his daughters, will be seeing the game in person along with his family. The whole thing has been "pretty darn exciting," he said, to go witness a team he's watched since the days of leather helmets compete for a chance to go capture the Lombardi Trophy.

But his connection to the city is deeper than the outcome of a game. Philly is where Basser was born — March 6, 1918, to be exact — and where, at the age of four, he lost his mother.

It's where his father, unable to afford working and raising him at home, was forced to put him and his sister, Rose, in a Jewish foster home in Germantown. Rose would die at just 8 years old, leaving only him and his father, who would come visit him on the weekends, take him to see relatives and bring him Hershey chocolate bars (he's been "hooked" ever since).

Philly is the home he left to fight in World War II and the Korean War. 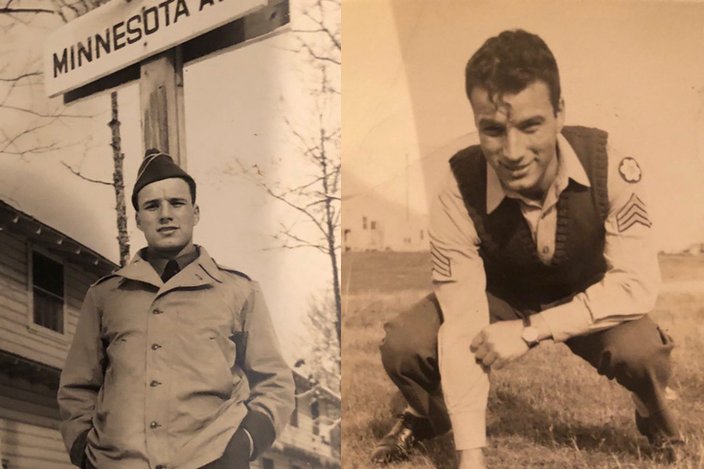 It's where the University of Pennsylvania's Basser Center for BRCA-related cancers is located. His daughter, Faith, died of BRCA-related ovarian cancer at 44. The center was founded thanks to a $55 million gift from another of Basser's daughters, Mindy, and her husband Jon Gray.

In April, he lost his "beloved" wife of 65 years, Pearl, a Philly native herself. Despite the hardships and untimely deaths, Basser refuses to look at life as half empty.

"One could look at my life and see the hurdles and the tragedy," Basser said. "These were all devastating, but I choose to wake up each and every day seeing the best that life has to offer."

Basser's bright-side mentality seems to have rubbed off on his grandson. Potter, who will be attending the University of Pennsylvania this fall, said his grandpa "still lives every day with happiness."

That includes their time spent together watching the beloved Birds, who Basser seems to have unbreakable faith in, despite the many struggles being an Eagles fan has presented over the years. 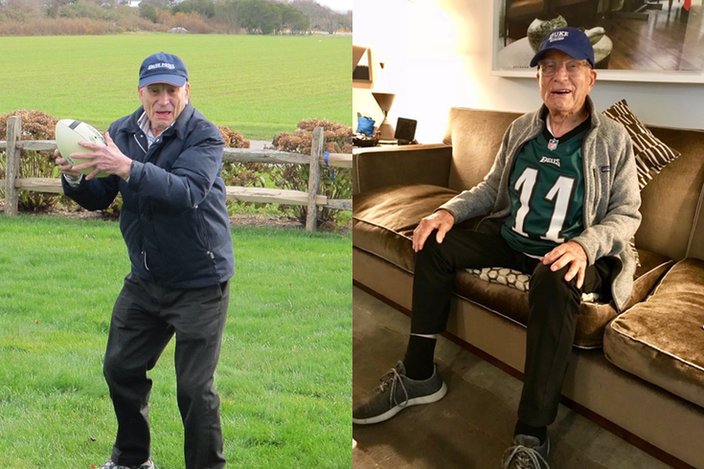 Philip Boris Basser has been an Eagles fans since the team's inception.

"Win or lose, it is something that I can share with my grandpa," Potter said. "There are times that I wish that I could remain as composed and even-keeled as he does during the games, but I imagine when he was much younger he might have yelled at the TV too."


Basser predicts an Eagles win for Sunday. Even if his hometown team doesn't come through, though, he'll remain devoted.

"Stay faithful to the cause and never be a quitter!"