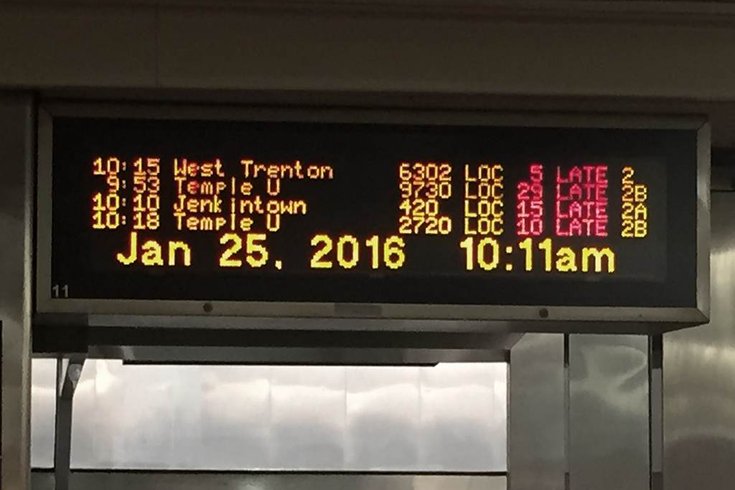 The board at SEPTA's Jefferson Station in Center City showed many Regional Rail delays on Monday morning.

All Regional Rail lines were running again Monday morning, but with delays up to 30 minutes due to weather-related issues, SEPTA says.

Many lines are operating at least two cars short, so passengers may experience overcrowding.

At some stations, however, it was clear that many people stayed home from work Monday – or at least found another way to work – as station parking lots, full on a typical day, had a good number of empty spaces.

The lot at the Melrose Park station, for example, had been mostly cleared of snow, but still had a number of empty parking spaces at 9:45 a.m. The Oreland station parking lot a couple of stops north, which appeared about 75 percent plowed, still had spaces available after 9 a.m. Both lots are usually at or near capacity on workdays.

SEPTA said service on the Paoli/Thorndale line is canceled between Malvern and Thorndale due to Amtrak switch problems.

"This is a very fluid situation," SEPTA General Manager Jeffrey D. Knueppel said during a news conference Sunday at SEPTA headquarters in Center City. "We're in good shape overall, but we want to make sure of that. We're still pushing to get more and more of the system going."

Knueppel said the Regional Rail lines might be operating slower than normal. More than 2 feet of snow fell along the tracks. Snow drifts accumulated to 3 feet in some areas. 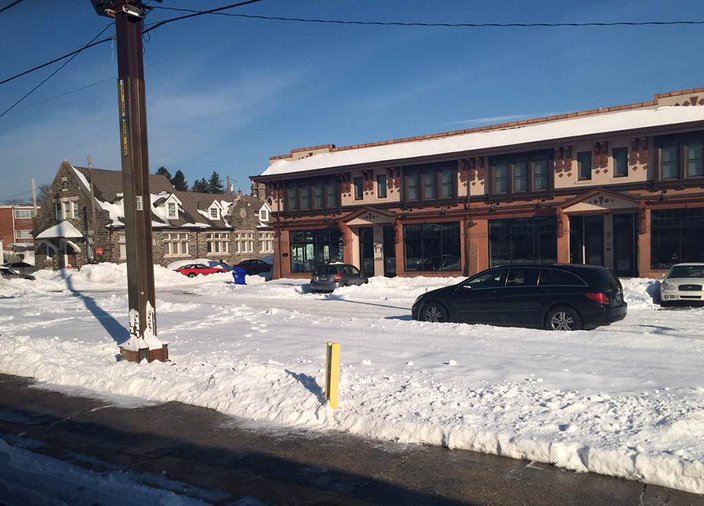 The smaller parking lot on the north side of the tracks at SEPTA's Glenside station remained unplowed Monday morning. But many other lots looked like they were mostly cleared.

About 30 percent of parking spaces at SEPTA's Regional Rail stations remain buried in snow, Knueppel said, adding that workers will be dumping all that snow elsewhere through the week.

On the Wilmington/Newark line, train #1295 to Newark and train #9212 to Center City are canceled due to equipment problems.

The Norristown High Speed Line will run from 69th Street to Bryn Mawr, with no service beyond Bryn Mawr to Norristown. SEPTA continues to work to clear the remainder of the track and hopes to have the entire line running at some point Monday.

City trolleys were running with no diversions Sunday night. Suburban trolleys are now operating to and from Media and Sharon Hill.

Limited bus routes are running, due to road conditions, parked cars and other roadblocks, he said. To check whether your bus route is running, click here.

But the number of bus routes running should continue climbing through Monday, Knueppel said.

"We're going to operate where it's safe and reliable," Knueppel said. "We send our supervisors out to drive the routes. Sometimes they'll say it looks good. They'll take a bus out as a pilot and the bus gets stuck and we realize we can't run the routes."

For the latest updates, customers should visit www.septa.org, the @SEPTA Twitter account and monitor local news for information on SEPTA’s service.