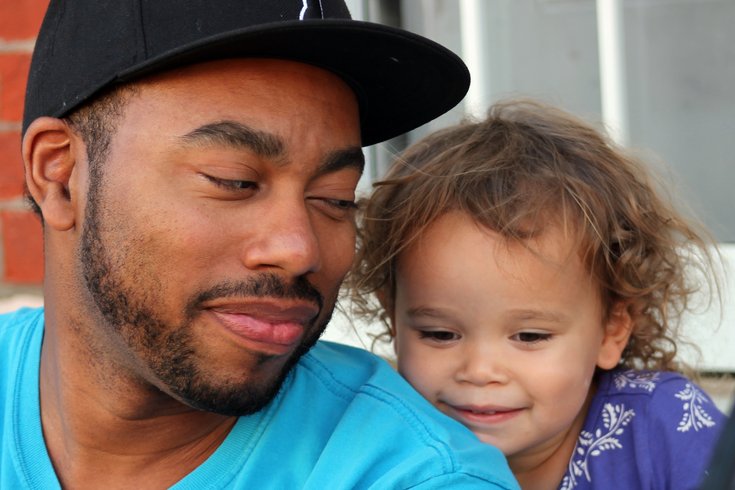 Cord Whitaker is pictured with his daughter, London. Whitaker, of South Philly, is working on an app to let users share photos with family members, easily, through the mail.

It's an issue just about everyone has probably encountered at some point or another.

You've posted something you're proud of to the internet, waited for likes and reveled in all the up votes.

But when you mention the posting to family or friends who would enjoy it, they admit they haven't seen it.

Everyone has that member of the family that refuses to use Facebook or doesn't feel a need to check Twitter repeatedly throughout the day just to check for news on family members.

And, that's where GrandShare steps in.

The project is the brainchild of South Philly's Cord Whitaker, 37. He, along with his brother, Thomas, and their friend, Kyle Taylor, just started an online fundraising campaign to create the new business.

The app allows subscribers to use photos from their electronic media and devices to send an art-quality photo card via mail to friends and loved ones.

Of course, getting prints made from electronic media is nothing new, but Whitaker's business allows subscribers to select how often they would like to send and print 4-inch-by-6-inch photos — once a month or once a week, for example — and GrandShare will deliver the photos to selected recipients by mail.

According to Whitaker, this gives someone something tangible — a memory they can hold — and for the older generation, it's something he believes many people will enjoy.

"We are trying to bridge the gap between family members between generations," he said in a recent interview.

It's an idea that, Whitaker said, he had when his daughter, London, was born in 2014.

At the time, he said, his grandparents were all "very excited."

"It was the first child born in my family in some time," he said.

One of the most excited members of his family, Whitaker said, was his 85-year-old grandfather, who lives in Point Breeze.

"He was hoping for a grandchild for a long time," said Whitaker. "When he heard about her, he absolutely lit up. He rushed to our home as fast as he could."

Whitaker said, it didn't take him long to realize that his grandfather wasn't really able to see the photos on the screen of his smartphone.

"He's 85 and he has some vision problems... He was always pretending to enjoy the pictures, but he wasn't really seeing it," said Whitaker. "And he's a good actor. But, after a while, it became clear [to me]."

Instead, Whitaker decided to have prints made of the same photos of his daughter. When he presented these photos to his grandfather, the reaction was entirely different.

"He lit up just like the first time that he saw her," said Whitaker.

Whitaker said the experience led him to realize that everyone has members of their family who lack computer literacy or an interest in social media, but would want to see regular photos of their loved ones.

But, GrandShare isn't ready yet.

Whitaker said that his team is seeking a total of $34,000 to finish developing the app and to help set up the equipment they will need in order to print and ship photos.

For more information on GrandShare or to donate to help the app reach its funding goal, visit their page on Indiegogo.