Phillies' Aaron Nola has arrived and is ready for MLB debut 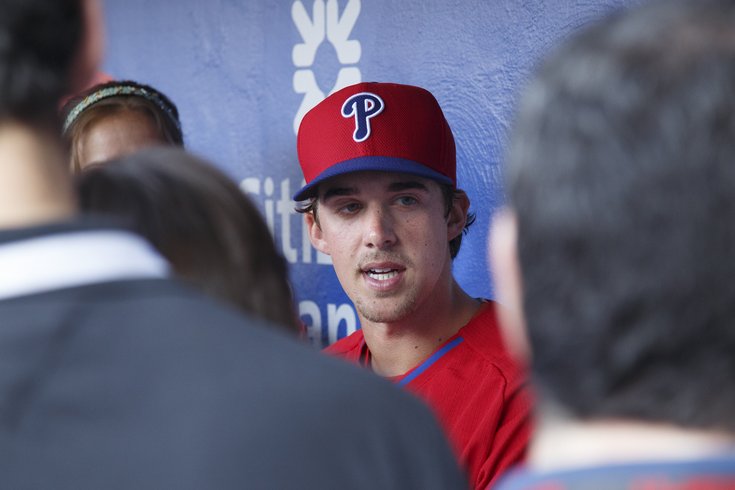 Phillies pitcher Aaron Nola meets with the media for the first time since being called up to the big leagues.

Prior to the team's series opener against the Rays, Nola met the media for the first time since he was called up to the big club late last week and said that he's ready to contribute, even though he understands the team won't be competing for some time.

After spending just over a year in the team's minor league system, the LSU product is looking forward to the pitching on the biggest stage.

“I’m sure there will be a little nerves before I go out on the mound," said Nola, who added that he got about 20 tickets for his friends and family. "But once I throw a couple pitches I think I’ll be okay."

Nola, who was the team's first round pick (7th overall) in the 2014 MLB Draft, has risen rapidly through the Phillies' system and it's not hard to see why.

He's been impressive at every level. Even after his most recent start, the worst* of his young professional career, ballooned his triple-A ERA from 2.43 to 3.58, the Phillies had seen enough to know that now was the time.

*He allowed five earned runs in just three innings for the IronPigs on Thursday.

“No [it didn't make us rethink our plan]," Amaro said Monday. "We laughed about it, because in typical fashion, of course he’ll have his worst start the one before he comes to the big leagues.”

"I just want to go out there and give it everything that I have and every time I step in-between the lines try to keep the team in the game and give us the best chance to win."

Amaro also went into more detail about why this was the right time to promote their top pitching prospect.

“We had a plan in place that we felt was time to execute," the GM said. "We felt he was ready to pitch in the big leagues. One of the things that we had to work around a little bit was the Futures Game. We had a rainout, so we had to push his start back. He was supposed to pitch in the Futures Game, maybe an inning or so. But since his start got pushed back one day, we decided that it was probably best for him not to pitch in that game. We wanted to get him ramped up one more time before he got to the big leagues.

"The expectation, obviously, is that he can hopefully pitch six, seven, eight innings if he can. And so I guess we got him up to close to 80 pitches the last time out. So he should be ramped up and ready to go. We don’t know how long he’ll go, obviously, but he’s physically ready to pitch an extended period of time if he can get through the first several innings.”

Nola, who said the first call he made after being promoted to the Phillies was to his family, was a bit surprised it happened the day after his worst pro start.

"It kind of caught me by surprise, but [IronPigs manager Dave Brundage] told me it was my last start over there and I was kind of shocked," Nola told reporters. "But this is definitely a good opportunity and a blessing to be here."

What comes next for the righty is unknown. Right now, there is nothing but expectations. Very high expectations, admittedly, but that doesn't seem to faze Nola.

“I just want to be the best that I can be," he said. "I just want to go out there and give it everything that I have and every time I step in-between the lines try to keep the team in the game and give us the best chance to win."

Still, with a team clearly rebuilding, there could be added pressure on Nola. After all, many fans are looking to him -- as well as Maikel Franco, Ken Giles and J.P Crawford, among others -- as the future of the franchise.

“I’m pretty good about blocking that stuff out," he said. "The Phillies have great players on this team, some veterans that have played a lot of baseball and really succeeded, and I feel like the team is getting better as the days go on. I’m just glad I’m here and I’m going to try to help as best as I can."

And that help goes both ways.

Because he's had a few days to let the news sink in, including Monday's game at CBP, Nola is taking full advantage of the advice he's been getting from some of the team's more veteran players.

Their main piece of wisdom?

“Just go out there and be myself," Nola said. "It’s still the same game.”

"[The vets have been] very welcoming," Nola added. "Just all of them came up to me, pretty much the whole team. When I walked in there they were welcoming, really nice and glad I got to talk to everyone a little bit."

So what else does he hope to learn from them during his first few weeks with the Phillies?

"Details about the game. How they play the game," he said, switching from advice he's been given to a broader, more proactive approach to learning the game. "I’ve watched them on TV before, I want to see on the field how they handle themselves and how they go about success and failure. I think that’s pretty cool to actually be on the same field as them now and get to learn from them.

And whether he knows it or not, Nola's presence alone could be a much-needed shot of adrenaline to a Phillies clubhouse that hasn't had much to get excited about (not including their weekend sweep of the Marlins).

"It will give us a boost, I’m sure," manager Pete Mackanin said of the arrival of his newest pitcher. "Everybody is anxious to see him. We feel that he’s going to be good for us this year. He might have some ups and downs. But we’re looking forward to seeing him pitch. I think if he throws strikes and gives us the innings we’re looking for, we’re going to be real happy about it."

He also reiterated Amaro's statement on Nola being ready to pitch at this level.

"I know he's got command of his pitches. He throws strikes, that's the main thing. That's a good start," Mackanin said. "His stuff is good enough to be effective at this level. Depending on how well he commands his pitches, that's going take him as far as it can take him. So we're all anxious to see him.

"Once he takes the mound tomorrow night, we'll have a better idea. That doesn't necessarily mean whether he does really well or poorly that he's not capable of pitching here. We believe he's going to be a good pitcher for us."

On Tuesday, fans will get one step closer to finding out just how good Nola can be.