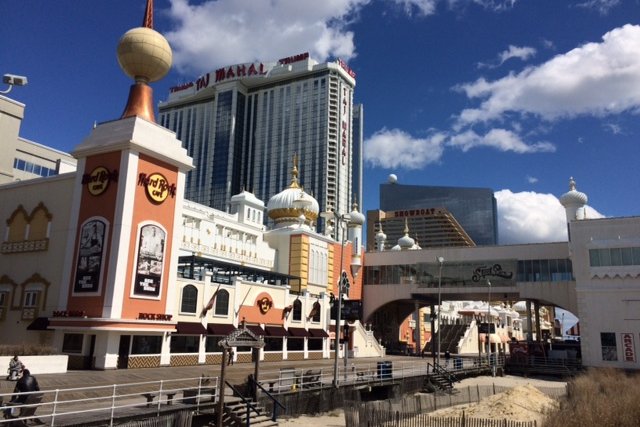 The northern end of the Boardwalk largely explains why Atlantic City is having money issues. Revel and Showboat casinos closed in 2014 and Trump Taj Mahal continues to struggle. With fewer tax dollars coming in, the city is in a cash bind. Politicians are squabbling over how to sort it out.

The homeless crowded into the city’s library for warmth and computer access.

Arsenis, the owner of a motel and coffee shop near City Hall, even paid more than $24,000 in taxes 40 days early in an attempt to help buoy the city, buffeted by the closing of four casinos in 2014 and the loss of millions in tax revenue.

“Hopefully negotiations are taking place and common sense will prevail at the end of the day, but there’s a time clock running.” – Acting Fire Chief Scott Evans, Atlantic City

Christie wants a takeover. Guardian and other members of city government are resisting, but need state approval for revenue known as PILOTs – payments in lieu of taxes – to stay afloat. And Prieto, who opposes the takeover because it would mean an end to collective bargaining agreements, has said his legislation offers a compromise.

But for now, the city just kept working, the result of an agreement between the city and its employees to wait 28 days between pay periods, not the usual 14 days.

That buys some time, with cash from first quarter tax bills coming in, but it does not fix the city’s long-term issue of spending too much and taking in too little revenue.

Still, Friday felt like a sigh of relief for many people.

“Everything is the same, operational-wise,” said Acting Fire Chief Scott Evans, who has also served as an interim mayor of the city. “Everyone understands the financial situation of the city."

“I see the men and women of the department coming together, willing to come to work despite this," he said. "On the other hand, the politicians are behaving like 12-year-olds."

“Hopefully negotiations are taking place and common sense will prevail at the end of the day, but there’s a time clock running,” Evans added.

Police union president T.J. Moynihan said there remains “a lot of uncertainty" in the situation.

"We don’t know what will happen. It looks like everyone will have to compromise, but for now the goal is to keep functioning," he said. "Either the state helps out the city or the city declares bankruptcy.”

Police spokesman Kevin Fair said the city remains “status quo,” with film and beer festivals planned for the city over the weekend.

Arsenis would like to see city government stay under local control, pointing out that for years the city’s finances have been overseen by the state and that the Casino Reinvestment Development Authority has taken over many land use decisions – and that has not resolved the city’s money issues.

“We want our city government, we want our mayor. What we need is a little help from the state” because downsizing a city takes time, said Arsenis, who feeds many city employees due to his proximity to City Hall.

Frank Becktel, a longtime jitney diver who lives in the same neighborhood as the city’s mayor, said while he’d prefer staying with local control, the worst part is the indecision.

“I know what the legislation says, but no one really knows what is on the table,” said Becktel, who is known as Jitney Guy on Facebook and Twitter. He added the real plans and the legislation are not always the same.

“Whatever it is, do it tomorrow. Make it tomorrow. The uncertainty is devastating. It’s been a black cloud,” said Becktel.

John Amon, 31, was in town with three others from Monmouth County, New Jersey, burning vacation days, but not happy about the resort town he found Friday.

“I used to come once a week. But now there is nothing to do. Everything is closed,” adding that the accommodations at Bally’s, where he and his friends stayed overnight, are “outdated.”

He said he spends more time gambling in Philadelphia and New York now, given the spread of casinos.

And Atlantic City seems to be missing on how to market to his generation. Featured on billboards coming into town were Tony Orlando — an entertainer he'd never heard of — and the Eighties rock band, Whitesnake.