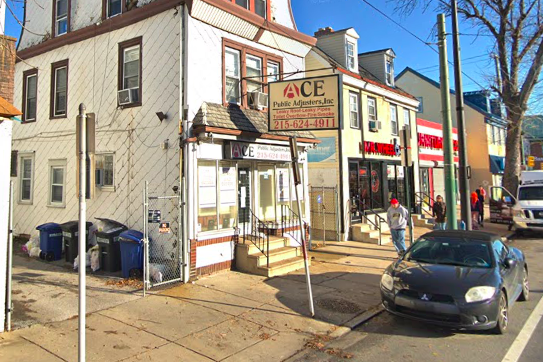 Ace Public Adjusters, at 7930 Frankford Ave. in Northeast Philadelphia, was shut down amid an investigation of insurance fraud. Owner Anthony Hoffman and two employees – stepdaughter Deborah Felix and her fiance Hartman Wismer – allegedly stole more than $300,000 from Philadelphia homeowners.

The owner of Ace Public Adjusters and two relatives he employed have been charged a with a slew of crimes after they allegedly defrauded 30 people out of more than $300,000 in insurance claims, Philadelphia District Attorney Larry Krasner announced Wednesday.

The Northeast Philadelphia company, well-known for its catchy jingle, is now closed for business and has listed its 7930 Frankford Ave. property for sale

Facing charges are Ace's owner, Anthony J. Hoffman; his stepdaughter, Deborah Felix, who worked as the company's office manager; and her fiancé, Hartman Wismer, a public adjuster with Ace.

All three defendants allegedly signed contracts with homeowners — many of them elderly — to represent them during their insurance claim process. Prosecutors said the trio conspired to take advantage of their clients, pocketing more than $300,000 as they failed to distribute the total value of insurance settlements.

In one case, an 81-year-old woman insured by Liberty Mutual Insurance Co. contacted Ace after her home was severely damaged by burst water pipes. The agreement negotiated by Hoffman called for Ace to receive 15% of the settlement. When the homeowner died, her daughter became the estate's executor.

Investigators tracked the checks that came from Liberty Mutual between February and November 2018. Seven checks totaling more than $127,000 were issued to Ace as part of the homeowner's claim. Three of the checks were allegedly signed and cashed by Ace at a local check cashing agency.

The daughter of the homeowner had received only about $90,000 in 20 separate payments, well short of the family's portion of the insurance settlement, prosecutors said. Three of Ace's checks totaling more than $13,000 each were returned for insufficient funds.

“Anthony Hoffman, Deborah Felix, and Hartman Wismer are the very reason why we have an Economic Crimes Unit: so we can find and prosecute malicious businesses like Ace Public Adjusters that target, lie to, and steal from vulnerable homeowners who just want to repair their homes and resume their lives,” Krasner said.

The defendants are each charged with insurance fraud, theft by deception, forgery, conspiracy and bad checks. Hoffman is in federal custody on income tax charges and Felix and Wismer have turned themselves in to police, according to prosecutors.

The company's required surety bond of $40,000 has been used to reimburse homeowners who were impacted by the alleged fraud.