ACLU: Marijuana arrests on the rise in Pennsylvania

Marijuana arrests have been climbing steadily in Pennsylvania over the last seven years, pointing to a law enforcement crackdown that has disproportionately targeted African-Americans, according to an analysis released Monday by the American Civil Liberties Union.

Between 2010 and 2016, according to the ACLU report, marijuana possession arrests of adults have risen by 33 percent, not including statistics from Philadelphia, where decriminalization in 2015 has dramatically cut down the number of arrests for the drug over the past three years.

“Even as acceptance grows, the war on marijuana continues,” said Reggie Shuford, executive director of the ACLU of Pennsylvania. “When police target marijuana users, they destroy lives. People who are ensnared in this system face limitations to employment, housing, and other fundamentals of daily life."

The most alarming discovery from the analysis is that black people statewide are now more than eight times more likely than white people to be arrested for marijuana possession, even though usage rates are similar among people of different races. The racial disparity in arrest numbers, calculated using Pennsylvania's Uniform Crime Reporting System, are reflected in the table below. 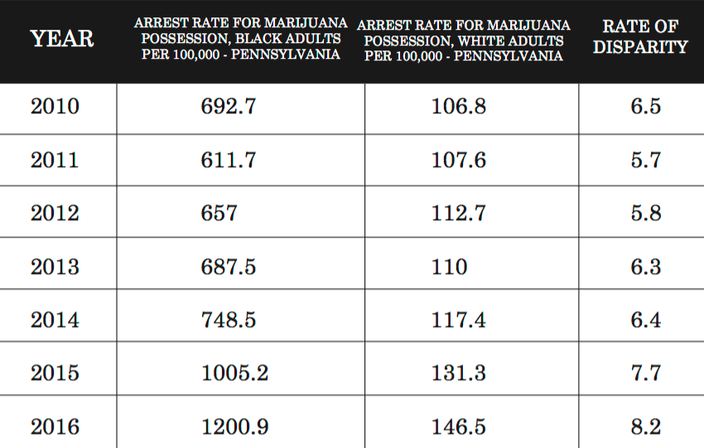 Marijuana arrest rates for white and black people in Pennsylvania from 2010-2016.

Leading the charge in the growing arrest numbers are the Pennsylvania State Police, whose total arrests per year for possession more than doubled from 2,221 in 2010 to 4,612 in 2016.


Pennsylvania taxpayers have spent about $225.3 million toward the enforcement of marijuana laws between 2010 and 2016, according to fiscal analysis by the RAND corporation.

The findings come as the state moves toward a full implementation of the medical marijuana law signed by Governor Tom Wolf in April 2016.

Despite State Auditor Eugene DePasquale's recent calls to legalize recreational marijuana in Pennsylvania for budgetary purposes, Wolf has maintained broader marijuana reform isn't on the table at this time.

As of 2017, eight states and the District of Columbia have fully legalized recreational marijuana.

Notably, the ACLU report highlights that arrests for marijuana sales in Pennsylvania declined by nearly 30 percent during the period of the analysis, meaning the vast majority of the state's arrests have been for low-level crimes like possession.

“This is merely the latest in a long line of studies to show that African Americans suffer the greatest harm from the failed war on drugs,” said Shuford. “Law enforcement won’t stop until they’re told to stop by policymakers. That is why it is time to legalize marijuana in Pennsylvania.”