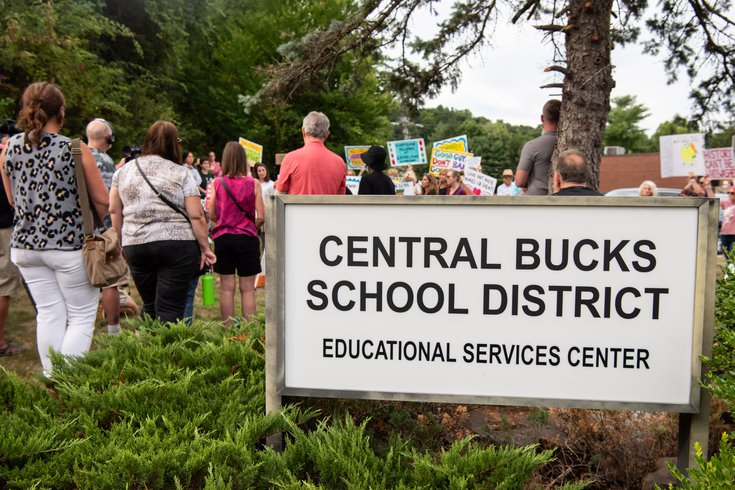 The ACLU of Pennsylvania has filed a federal complaint against Central Bucks School District, alleging widespread discrimination against LGBTQ+ students and a toxic educational environment in violation of Title IX and the equal protection clause of the 14th Amendment.

The ACLU of Pennsylvania filed a federal complaint against Central Bucks School District on Thursday, alleging the district has "perpetuated a toxic educational environment" against LGBTQ+ students and engaged in discrimination that is in violation of their Title IX and 14th Amendment rights.

In the 71-page complaint to the U.S. Department of Justice and Department of Education, lawyers for the organization revealed the results of a five-month investigation into accusations of LGBTQ+ discrimination at Central Bucks. It included interviews with dozens of students, family members, current and former staff, and community stakeholders.

According to the complaint, the existing toxic environment was recently exacerbated by several proposed and implemented policies aimed at LGBTQ+ students. Some parts of the complaint have been redacted in order to protect the identities of seven minor students who reported discrimination to the ACLU.

Many of the policies were implemented following the election of multiple new school board members in November 2021. Some policies highlighted by the ACLU include a measure that directed the removal of pride flags as "inappropriate" political symbols, intimidation of teachers into removing LGBTQ+ resource materials from their classrooms, and directing staff not to use a student's preferred name or pronouns without parental consent.

Others include relegating a health class to at-home instruction after a non-binary student insisted on joining the girls' class, suspending a teacher for helping a transgender student file an OCR complaint with the Department of Education, and passing library and textbook policies aimed at removing "sexualized content" from school books.

"These children deserve a safe environment where they can learn and be their full selves without fear of being bullied by other students," said Witold Walczak, legal director at the ACLU of Pennsylvania. "Unfortunately, rather than combat the toxic educational environment faced by LGBTQ+ students in Central Bucks, a new school board majority and the administration have exacerbated the problems with new homophobic and transphobic policies that have heightened the climate of fear for this group of students and supportive staff."

Most recently, the school board proposed a policy that would characterize discussions of sexual orientation and gender identity as "political," and would ban discussions or displays intended to show support for those students on the basis that "(i)t may communicate that students who do not agree with certain positions are unwelcome," according to the complaint.

The complaint also alleges that the policies have resulted in an increase of student-on-student bullying and harassment across many of the district's middle and high schools.

"We believe it is paramount that all students and teachers are cared for and respected as members of our learning and teaching community," Central Bucks Superintendent Abram M. Lucabaugh said in a statement. "With regard to today's filing, we do not comment on legal matters."

The legal complaint details more than a dozen instances of alleged discrimination as part of Central Bucks' hostile environment for LGBTQ+ students, including the administration's decisions to sever ties with some inclusionary organizations.

Following the implementation of a policy requiring faculty and school staff to use a student's birth name and gender until an official change was approved by parents, several teachers at Lenape Middle School and Central Bucks High School told the Bucks County Courier Times that they would defy the directive, saying it would force them to choose between their jobs and the welfare of LGBTQ+ students.

Some principals and school administrators throughout the Central Bucks School District have refused to honor the measures, which they say are homophobic, according to the complaint. Others — including officials from the central administration — have chosen to affirm the policies and directives despite complaints from students and staff.

The ACLU requested that the federal agencies order the Central Bucks School District to adopt at least six measures recommended by the Department of Education for supporting transgender and other gender non-conforming youth in school, and take further action to eliminate the hostile environment for LGBTQ+ students.

These measures include using inclusive language in schools, ensuring school policies affirm students' right to be free from discrimination, adopting policies that respect students' gender identities, adopting plans to help staff on how to support students and communicate with families, creating opportunities for students to find staff support, and providing inclusive professional development for educators.