Drug traffickers have been disguising the synthetic opioid as brightly-colored candy in an attempt to addict young people, federal officials say 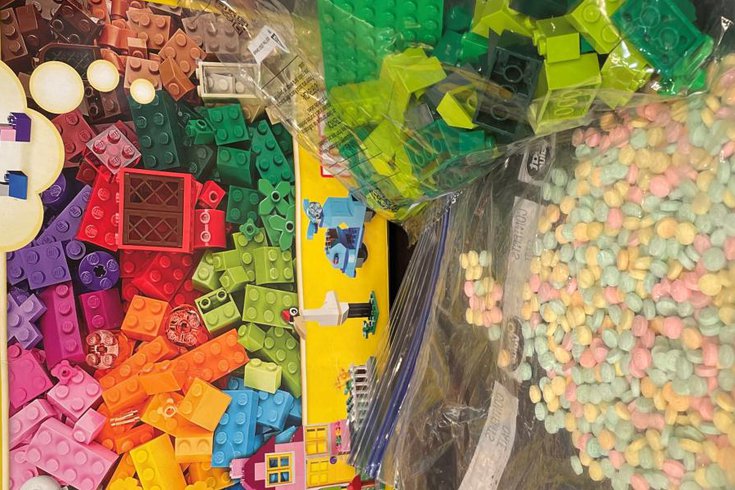 DEA agents in New York City seized packets of rainbow-colored fentanyl pills that were hidden inside a LEGO box. A Trenton, New Jersey woman has been charged in connection with the seizure of the deadly drugs.

A New Jersey woman was arrested in Manhattan late last month after authorities found about 15,000 candy-colored "rainbow fentanyl" pills that she had hidden in packages inside a LEGO box.

The seizure of the 15,000 pills is the largest to date in New York City and serves as a sign that the colorfully branded version of the deadly synthetic opioid is now being distributed more widely, often disguised as other drugs, U.S. Drug Enforcement Agency officials said.

Lateesha Bush, 48, of Trenton, was arrested Sept. 28 on the Manhattan side of the Lincoln Tunnel as investigators were conducting surveillance as part of an ongoing narcotics trafficking investigation. Bush was seen carrying a black tote bag wrapped around a large object as she entered a vehicle in front of 475 10th Avenue in Manhattan, authorities said.

When the car was stopped, investigators found two black tote bags and a yellow LEGO container with Bush in the backseat. The container had several brick-shaped packages inside that were covered in black tape and sitting next to LEGO blocks. On one of the packages, the tape had been partially opened, showing the multi-colored pills inside.

Preliminary testing of the pills indicated the presence of fentanyl, which was linked to more than 66% of the nation's 107,622 fatal drug overdoses in 2021.

The pills seized from Bush were imprinted with "M" and "30" to resemble 30 mg oxycodone pills, investigators said. Fentanyl is often produced in pill form to disguise the substance as a prescription drug. Blue pills mimicking 30 mg oxycodone tablets have been around for years, but the presence of newer colors has sparked concerns about accidental ingestion by kids and curiosity among inexperienced drug users.

Fentanyl's association with the nation's rise in overdose deaths over the last decade also coincides with evidence of growing racial disparities in these deaths. Overdose death rates increased by 44% among Black people and 39% among Indigenous people from 2019 to 2020, according to a July report from the U.S. Centers for Disease Control & Prevention. In comparison, the overdose rate among white people only increased by 22%.

Law enforcement officers are now finding more fentanyl in the drugs they're seizing than they did in years past.

In recent months, the DEA has seized rainbow fentanyl pills numerous states, creating alarm over what officials have called a deliberate effort by drug traffickers to drive addiction among teenagers and kids. There is no evidence that different pill colors correspond to different dose levels, according to DEA lab tests, but the agency's "One Pill Can Kill" campaign underscores that any fentanyl pill consumption can be lethal.

"Disguising fentanyl as candy – and concealing it in children's toys – will never hide the fact that fentanyl is a deadly poison that harms our communities, our families and our city," NYPD Commissioner Keechant L. Sewell said in response to the drugs seized from Bush, who allegedly had traveled from New Jersey in a rental car prior to her arrest.

Investigators said the pills originated from Mexico, where the Sinaloa Cartel and the Jalisco New Generation Cartel have been responsible for trafficking the majority of fentanyl in the U.S.

In Philadelphia, fatal opioid overdoses involving fentanyl have increased significantly over the past several years. In 2012, only 2% of opioid deaths involved fentanyl, but by 2020, that figure had skyrocketed to 94%.

Last year, the Philadelphia Department of Public Health warned that "fentanyl is in everything," including drugs such as methamphetamine and PCP that have been linked to a growing number of fatal overdoses.

"Its presence in non-opioid drugs and counterfeit pills is especially concerning as individuals who prefer these drugs may have had little exposure to such a potent opioid and may be at an even greater risk for overdose," said Dr. Kendra Viner, director of the health department's Substance Use Prevention and Harm Reduction division.

Bush has been charged with criminal possession of a controlled substance and was arraigned Friday in Manhattan Criminal Court.