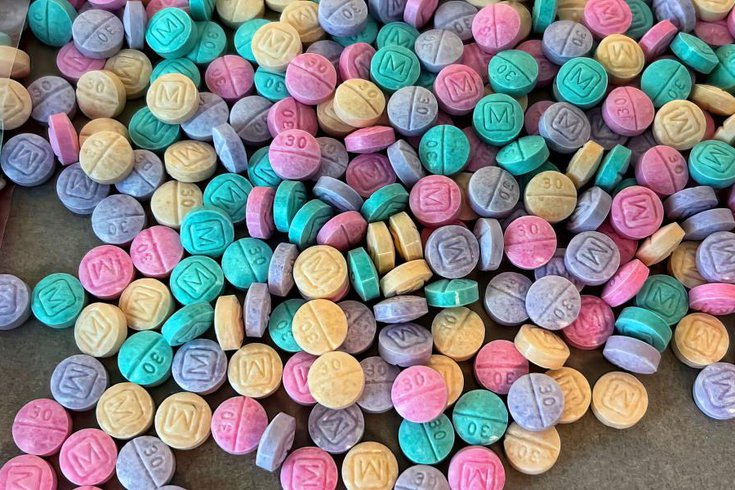 Fentanyl is now being sold on the street in brightly colored pills, powders and blocks that resemble sidewalk chalk, federal officials say.

The Drug Enforcement Administration issued a warning about the emerging trend, saying drug cartels are using the new form, dubbed "rainbow fentanyl," to lure young Americans into addiction. In August, the DEA and other law enforcement agencies seized rainbow fentanyl in 18 states.

"Rainbow fentanyl – fentanyl pills and powder that come in a variety of bright colors, shapes and sizes – is a deliberate effort by drug traffickers to drive addiction amongst kids and young adults," DEA Administrator Anne Milgram said. "The men and women of the DEA are relentlessly working to stop the trafficking of rainbow fentanyl and defeat the Mexican drug cartels that are responsible for the vast majority of the fentanyl that is being trafficked in the United States."

Two seizures of rainbow fentanyl that resembled sidewalk chalk were made in near Portland, Oregon and a batch of about 15,000 multicolored pills was recovered from a person in West Virginia, The Hill reported. Seizures also have been made in California and Washington.

Fentanyl, a synthetic opioid, has helped fuel the rise in overdose deaths in recent years. The drug is 50 times more potent than heroin and 100 times more potent than morphine, the DEA says. Two milligrams – equivalent to 10 to 15 grams of table salt – is considered a lethal dose. But the agency warns that there is no way to know how much fentanyl is concentrated within a pill or powder without lab testing.

Despite claims that certain colors of rainbow fentanyl are more powerful than others, the DEA's laboratory testing shows no indication that is the case.

Drug poisoning is the leading killer of Americans between ages 18 to 45, with fentanyl viewed as the deadliest drug threat. In 2021, 107,622 Americans died of drug overdoses – 66% of them were related to synthetic opioids, like fentanyl, according to the U.S. Centers for Disease Control and Prevention.

In Philadelphia, fatal opioid overdoses involving fentanyl have increased significantly over the past several years. In 2012, only 2% of opioid deaths involved fentanyl, but by 2020, that figure had skyrocketed to 94%.

Pharmaceutical fentanyl is approved for treating severe pain, typically resulting from cancer, but most cases of fentanyl-related harm, overdose and death are linked to illegally-made fentanyl. Two drug criminal networks, the Sinaloa Cartel and the Jalisco New Generation Cartel, are the main suppliers of this fentanyl in the U.S, the DEA says.

Last year, the DEA launched its "One Pill Can Kill" campaign to educate Americans about the dangers of fake pills, which often contain fentanyl or methamphetamine. Additional resources can be found on the DEA's Fentanyl Awareness site.

In June, the Pennsylvania House passed a bill decriminalizing fentanyl test strips in an effort to reduce overdose deaths. Fentanyl test strips are inexpensive and allow people to detect the presence of fentanyl and fentanyl-analogs in drug samples prior to ingestion. The legislation, which remains in the state Senate, aims to raise awareness of the dangers of controlled substances and provide resources to drug users rather than punishing people experiencing addiction.

The DEA advises people who encounter fentanyl, in any form, not to handle the drug and to immediately call 911.